Posted by Nicky Richmond on August 6, 2011 in food | Leave a comment 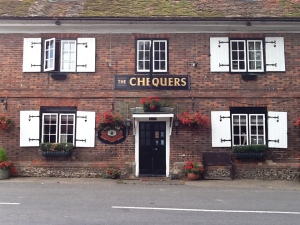 Many many years ago, I used to have a boyfriend with a mother, had I then had the psychotherapeutic words to describe her, those words would have been passive-aggressive narcissist. Many a night, trying to get away within an hour of actually saying goodnight, in the safety of my own car I would cry and bang my head on the dashboard with frustration. I mean, she used to call us during Dallas, deliberately. If that isn’t an act of aggression I don’t know what is. One of the best things about the end of that relationship was never having to see her again, but that’s a whole other blogpost.

Anyway, she wasn’t all bad and one of the things she did very well was food. I think she had trained at Cordon Bleu and she knew a good restaurant when she saw one and I learnt a lot about simple but good cooking from her.

One Sunday, when asked to go round for yet another an interminable lunch, on the spur of the moment my boyfriend lied and said he felt quite ill and couldn’t leave the house. Having been given a “get out of jail free card” we decided to go to one of her favourite restaurants, the Chequers Inn in Fingest.  No chance of bumping into her, as she’d be cooking lunch, ready to ensnare alternative guests in her web.

As we stood in the bar, having a pre-lunch drink,  I happened to glance out of the window and see my boyfriend’s brother. For a split second, I thought “how lovely” and “what a coincidence, P is here”. Then I remembered that P couldn’t drive. Then I saw her.   It was impossible to escape, of course; there was only one entrance and it wasn’t a big place. My boyfriend blanched and choked on his beer. We’d been caught.

I thought about that today, when we decided, on a whim, to go and have lunch there. Fond memories of the chocolate fridge cake drew me back and I thought it might have retained some of its charm.  I thought wrong. 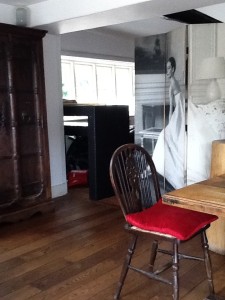 Is it a storeroom? Is it a restaurant? They don’t know and neither do I

Don’t come out all the way from London unless you like Norman churches because that’s the only interesting thing in the village. 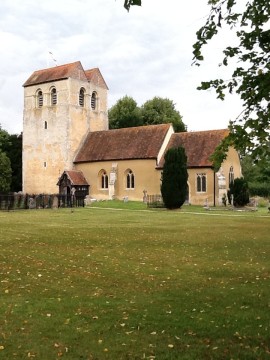 The  food was bad. The service was bad. My husband’s steak was uncooked to the point of just-killed. It’s shambolic, I’m afraid, run by boys who seem to be serving (and possibly cooking) there as part of their gap year. It’s not even worth describing the food, but here we go anyway: no bread, green salad just three types of leaf  each of them underdressed,  bad chips, mediocre Welsh rarebit. 20 minutes for the bill and then the chip and pin machine doesn’t work. Just amateur.

So no chocolate fridge cake and just an overwhelming urge to escape, just like last time.

← RIP : The very late and very great ; I should Coco(rino) Top food at Marlow Bottom – The Hand and Flowers →