Home » food » Danesfield House. It’s a restaurant. In the Chilterns. A good one. Go.

Danesfield House. It’s a restaurant. In the Chilterns. A good one. Go.

Posted by Nicky Richmond on September 7, 2011 in food, hotels | Leave a comment

I deliberately didn’t read any reviews. After last week’s big letdown at the Kingham Plough, where the weight of expectation from the almost overwhelmingly positive reviews was probably too much for anyone to live up to, I decided to chance it. Other than a quick look at the www.thecriticalcouple.com (my new bible) I went unprepared.

It’s quite grand; a massive, crenellated folly in white, perched on a Chiltern Hill, with a spectacular view of the Thames.  I didn’t actually get to see that view a) because we were late b) because there was a wedding going on and we couldn’t get onto the terrace  and c) I didn’t even know it was there until I saw Wogan on Wodehouse the next day and it happened to be used as a backdrop. 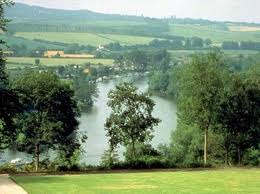 My heart sank at seeing the wedding guests. It’s a conference centre/wedding type of place and wearing my Cynthia Selfish hat,  I thought the food would probably suffer, as they tried to roll out 300 servings of poached salmon followed by the inevitable chocolate fondant.  I’d come for a Michelin-starred meal and I didn’t want anything less than the Full Monty from the kitchen staff.

It started really well. I like a restaurant where the maitre-d  greets you by name. I was less impressed by that little flourish when I saw the only other couple in the dining room. Full it wasn’t. Throughout the course of the  evening, there were only 2 other tables occupied. The maitre-d was fantastic though;  helpful and knowledgeable, we had a good moan together about the poor food offering in Oxford and my pet subject, the importance of good bread.

The dining room lacked atmosphere.  It was cream and padded.  Lush but dull.  Lighting wrong.  You could do so much more with it.  It’s a serious dining room, very grown up. Why then use it as a corridor from an adjoining room, so that throughout the evening, various people drifted through it, on their way to who knows where.  Lost wedding guests maybe? What about the chap in the red football shirt who walked past our table 5 times – what was that about?

It’s a real shame that this restauraunt isn’t full  because the food is really spot on. I had roasted Scottish scallops, sand carrot purée, pickled carrot, carrot and cumin cake. A really interesting combination of textures and flavour, it was delicately done and well presented.  Great, I thought. Bring it on. I followed that with a fish dish. I then had something sweet. Let me confess.  My review trails off into monosyllabic incoherence, because just before my main course, my antibiotics and the modest amount of alcohol I had consumed decided they woudn’t mix and I lost my ability to remember very much at all. And no, this doesn’t often happen, at least not around food.

For the purpose of this review therefore and  as painful as it is for a control freak such as  myself,  I am forced rely on the verdict of my husband.  He is, rest assured,  a man of legendary taste and sophistication, blessed  with a palate of peculiar precision and perfection, so when he pronounces the food excellent and the cooking sophisticated and assured, you can be sure that it is, indeed, the bollocks. Not that he would ever use that phrase, of course, being a man of refinement. And from Canada, where that phrase is unknown.

Unfortunately, no amount of amnesia would allow me to forget the rather hideous loos,  last refurbished in about 1980.  I recall nausea, exacerbated by pink, gold on the tiles and frills (I may have hallucinated that last bit). It looked like the loo of a very tired and old-fashioned hotel.

I do remember this though :

The chef is really talented, but the setting is odd.  He isn’t sufficiently well known to attract people for the food alone and it’s not a “destination” foodie place like Le Manoir. I live 20 minutes away and it had passed me by. A friend of mine had stayed there on a package and didn’t go to the restaurant, not realising that it was a serious foodstop. I think it’s trying to be all things to all people : spa, hotel, conference centre, top restaurant. you can’t be all of those things easily. The restaurant needs a makeover;  it needs to feel important, like it’s at the heart of the hotel. It doesn’t yet.