Guess what this is

I was torn, frankly, between the lure of Caravan, King’s Cross, which promised a more interesting-sounding menu and better coffee – and this. I was already feeling like a failed food blogger having not been there already so I went with my head and not my heart and chose this.

Despite all the warnings about not finding the entrance, it was quite easy to find on Bishopsgate –perhaps they’ve listened to the food bloggers and put a sign there, because you can see it clearly from the street. I don’t really like the Heron Tower architecturally, but that wasn’t the point. The point is the height, really and it is breathtaking, for those of us who are not used to skyscrapers in their daily lives. Ask for a table by the window.

So we zoom on up to the 40th floor, as you do, thinking that 9. 15 on Sunday morning would be pretty empty . We were a little surprised to be told that the restaurant was full but that they would see whether the kitchen could fit us in. Full. when I last thought about the meaning of that word it meant not empty. As you will see from the picture, full it was not. Neither was it anything approaching “full” when we left at around 10. 30.

I hate that up its own backside sort of thing, don’t you?

The brunch menu is fairly simple; the usual staples are there with some quirky additions.

guess what this is

I didn’t actually try the duck and waffle, although I did see it being prepared and it looked the business. C chose the full English. I particularly liked the hash brownies and the mushroom which I stole from his plate, in the interests of market research. 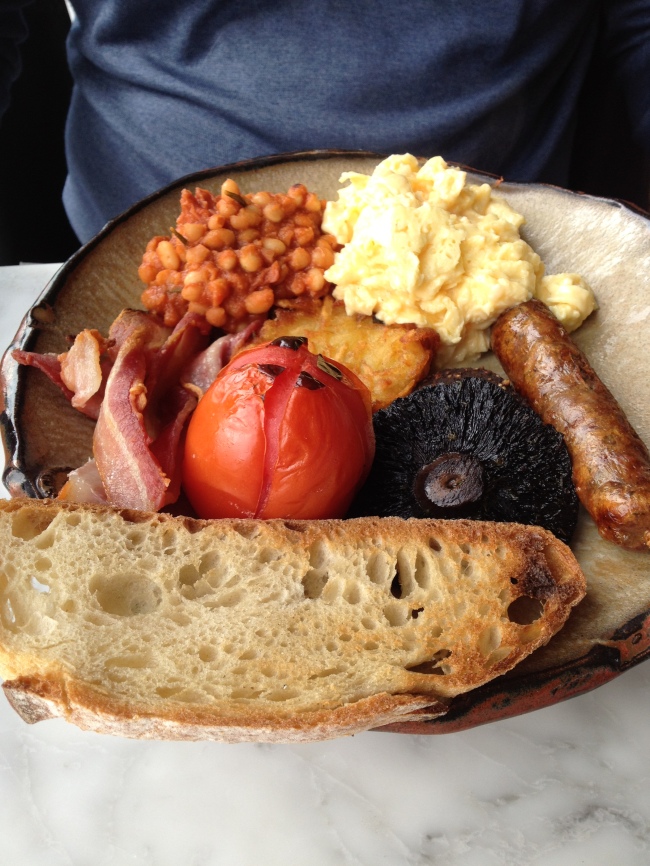 The full English. What did you think it was ?

I had Colombian eggs which is, basically, scrambled egg with spring onions on top of sliced avocado on a piece of sourdough toast. It was fresh, and tasty, and something I would make myself at home.

That’s not to decry it in any way – it was exactly what it should have been and well executed. Am I the only one noticing a whole big avocado renaissance at the moment? Everybody seems to be chopping up in different ways, on a bed of sourdough, mainly.

It was a bit too early to have a drink, even for me, so here’s a picture of the bar. The location isn’t the only thing that’s stratospheric; the bar prices will have you gasping for air.

Having bitched about it I must say that, really, I liked it. Not enough to trek from west to east on a regular basis, but enough to suggest it for client meetings/breakfast if I have to venture into the EC postcodes. I love the fact that it’s open 24 hours and there will be somewhere for me to eat after the theatre and late meetings. I’m not sure that I’d want to be there at 3 a.m., when the corporate boys will doing their big swinging dicks thing, but I think it fills a real gap in London and especially in the City. Another step closer to New York.

The bar. It’s a bit too colourful for my taste. But then I’m old.