They don’t need a sell-by date

Even saying the words “round 2” will irritate some people. It would irritate me.

It’s still incredibly hard to get a table here: partly due to the size – I guess around 35 covers – but mostly due to the quality of the cooking, which is unlike anything else in its price range.

We started with a drink downstairs. I’m not sure why the bar isn’t being used as an extension of the restaurant and the lawyer in me is thinking planning permission or building regulations. Who knows. But it was empty. I assume that most people don’t know that you can get quite a lot of the restaurant dishes down here with your drinks because, given the booking situation, it should be mobbed.

I started with a sloe gin cocktail. It had grapefruit and ginger ale and wasn’t too sweet. There is a good selection of unusual cocktails and if you don’t fancy them, this is the sort of place that would make you what you wanted.

There’s a set lunch at £28, but obviously I completely disregarded what would, for me, be a sensible choice, given the amount I have eaten recently and the fact that (and I am not exaggerating here)  I have no trousers that fit me,  and went for the £54 tasting menu. You understand, I’m sure.

Before that,  lovely buttery olives. OH is an olive fascist. After doing the ‘I only eat olives in Italy routine’ which frankly has me chewing off my own arm,  I made him try one. Obviously and entirely predictably,  he had to confess that they were indeed amazing. And then proceeded to eat most of them.

Then the bread. In a bag. Crunchy with a taste of smoky bacon. From being over the smoker I think. I showed supreme will in the face of temptation and only ate the one doorstop piece.

Then a cabbage and pine nut/mayonnaise dip. Fresh and clean.

That was followed by the celeriac, with toasted hazelnuts and grapes. You know, when I say it, I can see that the description doesn’t get my juices flowing and the picture doesn’t look very enticing. Yet this really was superb. Clean flavour, delicate, mix of textures. I’d never have put the grapes here but they really made the dish.

Then the coddled egg. Massive umami swoon at the smoked mushroom and the rich, almost pasty texture of the egg. I need the recipe for this.

Then halibut, with pickled ginger, celery sea aster and sea purslane. I’ve had sea aster twice this week now. I’m not sure what that makes me except probably quite annoying and foodie-pretentious. But so what. It was another clean-flavoured dish, elevated by the clever use of herbs and vegetables to something very sophisticated.

And then the pork. Anyone who knows me will do a double take at that one. I ate it.  For those who are wondering what I’m banging on about, I stopped eating meat about 4 years ago. Didn’t like the idea. I’ve decided to give it a go again. The jury’s out. But not on this dish.

Tender and simple I managed to forget it was meat for a few minutes and just enjoy it. The toasted nuts were spectacular.  Like grown up, semi-liquid peanut butter. And there was an interesting transparent foamy dressing. I have no idea, frankly, but it cut through the richness of the pork and gave a sweet/sharp contrast.

We could have added cheese at this point but OH shook his head and I had to concur. It doesn’t happen often. And I’m glad I did, given what was to follow.

Cheese curds and fig, with chopped pistachios. The curds were sharp and creamy and I liked the contrast with the texture of the cheese.

And then I died. Chocolate. As far as I can describe : mousse, brioche, aduki beans, malted ice cream. A person who shall remain anonymous referred to it as a grown up fruit and nut. I didn’t really like fruit and nut but I loved this.

In fact I loved it so much that they took pity on me and brought me another one. Because I really needed. And because it would have been rude not to in the circumstances. Suffice it to say I didn’t eat dinner. Nor breakfast the next day. .

Only the one doorstop 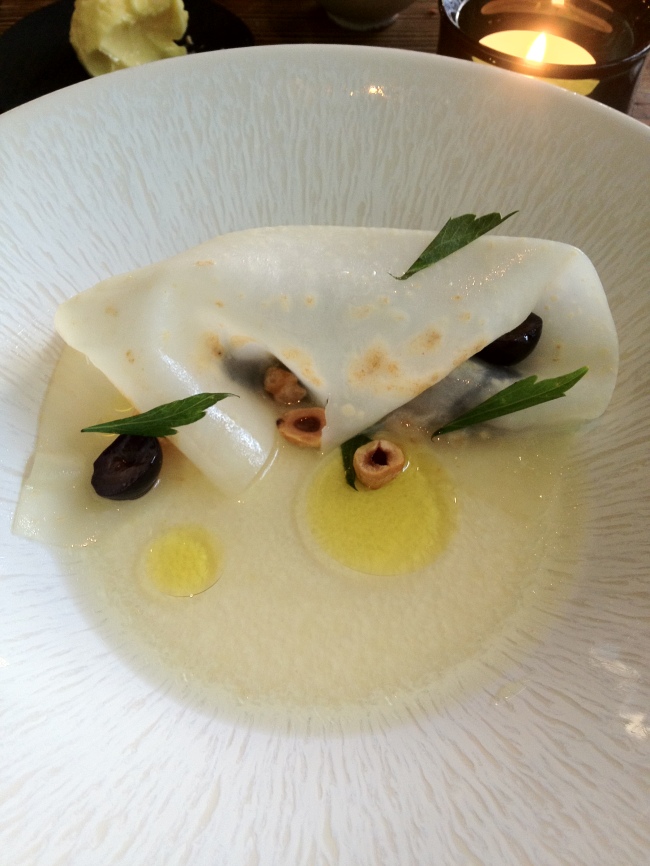 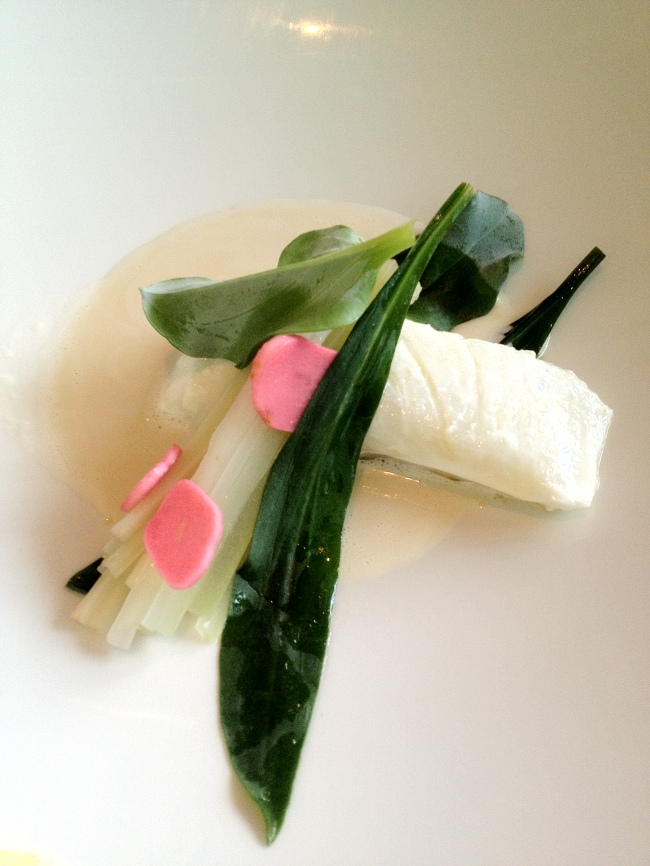 All about the fish. And the pickles. And sea aster.

Pork. Wrong on so many counts. But right on more.

Because I really needed two