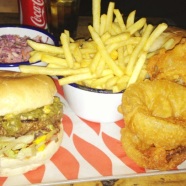 I confess, I had not been until last week. My credibility must be brought into question by that but, in my defence, it was only a month ago that I started eating meat again so don’t judge the Judge too harshly. And you shouldn’t come here without eating meat.

I’d had one of those mornings and I needed to commit carbicide. I grabbed a colleague and told him we were going for a burger. I’m not sure it was quite what he was expecting, but there you go; I’m bored with our internal meeting rooms and this seemed like a good substitute.

I’d been to this restaurant, a 70’s monstrosity, in two of its previous incarnations and both of them were so dire, it was no surprise that they failed, so it was novel to see people in there.

And when I say “see”, I use the term loosely, because it is so dark, even at lunchtime that you can hardly see anything. You can hear the loud music though, over which I will draw a middle-aged veil.

And they haven’t spent anything on the décor. It’s like they got a bunch of schoolchildren to do an art project on the walls, based loosely on Halloween and graveyards. There’s a lot of black and red and dangling wires. It’s grunge-tastic.

And yes, I realise that I’m probably three generations older than the target market but, having reached the venerable age of 50, I find that frankly, I don’t give a damn.

There is also the queue thing and I don’t normally hold with it, but it was a Wednesday lunchtime at 12.45 and we walked straight in. I think the queues are worse in the evening. The music probably is too.

And it’s the business. Burgers are served on an enamel tray; there is no cutlery. Onion rings, the size of your fist, are plonked directly onto the tray and you get a large kitchen roll, which you will need, because the burgers are moist and large and the sauces will drip down your face and onto your clothes. Or perhaps that’s just me. It’s not elegant.

There are lovely sides of chips with chilli and other such delicacies, like deep-fried pickles which you can add on the side. Because you might need.

And the burger was lush. Moist, pure flavoursome beef, properly charred on the outside and pink within. It was good, tasty and piled with items of utter deliciousness. I couldn’t eat it all with my hands, because my wrists looked like I’d slashed them, so much red burger juice was running down them. It wasn’t pretty but it was gorgeous. Sometimes, wearing only black has benefits other than the hiding of fat.

I had to resort to a fork #coolfail and eat the rest by stabbing it round the tray. Obviously I hoovered up every last bit. And so will you.