I was happy that I had finally made it after months of near misses. Greeted by a plate of crispy deep-fried prawns, the recruitment consultant whose guest I was, had chosen wisely. They were incredibly fresh. I’m glad that I hadn’t noticed them earlier, opposite, in the iced display. They were so fresh that they were still actually moving. Not only moving, some of them were actually doing kamikaze dives off the side of the counter. It was a little piece of theatre that I wasn’t quite expecting.

If you look closely you can see them moving.

And I do wish that I’d been warned before we went that my dining companion doesn’t eat wheat, garlic, onions or long-chain sugars (no, me neither). The result of a dodgy tummy in Turkey, I’m told. So everything I ate here was without onions or garlic and choices were, to a large degree, constrained by the allergies.

Notwithstanding that, the food was wonderful and the staff were fantastically accommodating and sensitive to my companion’s needs.

The setup is not a conventional restaurant – it is a bar at which you get served and the food is freshly prepared to order. It’s a hive of activity. You can’t book. We got there at 1215 and there were four places left around the main bar and some places left around the outside, which is where you do not want to be.

And the menu is what you would expect from top-notch Tapas bar – a full range of cured meat dishes, tortillas, daily specials of fresh fish and seafood, hot meat dishes vegetables and side orders.

We had a platter of cold meats in perfect condition and an interesting selection, 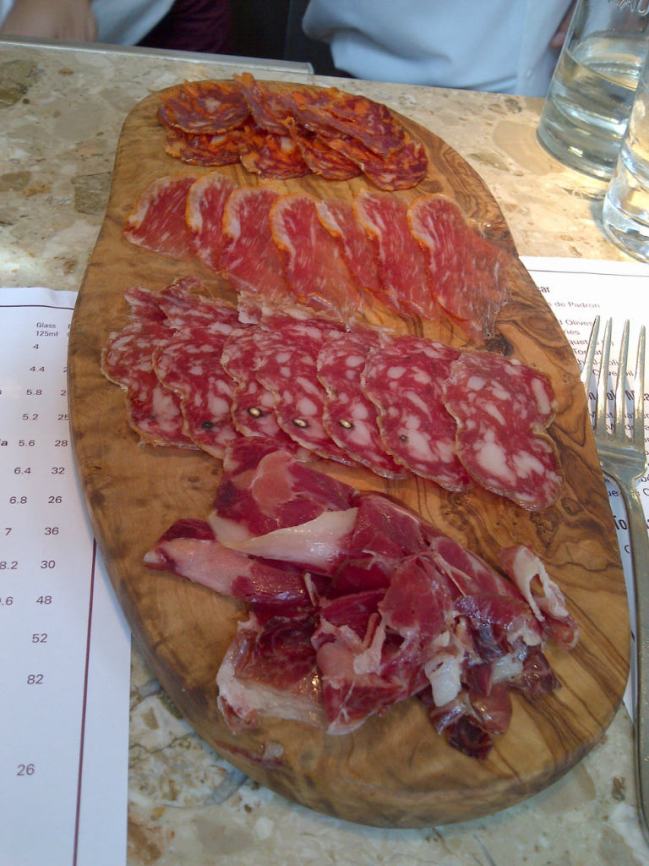 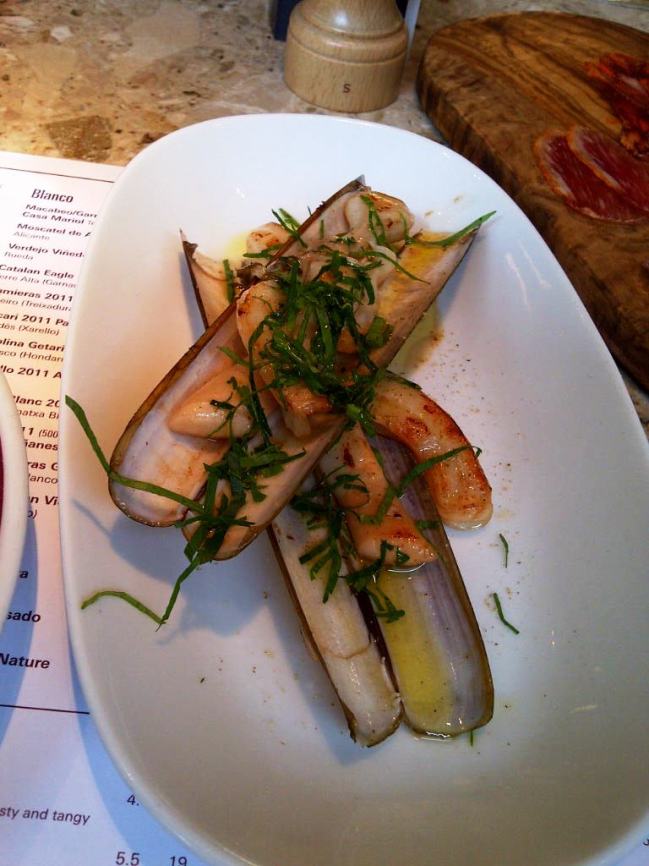 Razor clams. Next time with garlic.

chorizo with potatoes and watercress (simple and delicious)

stuffed courgette flower with a pungent cheese – this was particularly gorgeous

and then followed by a baby brill. I saw other people having this dish and it was topped with all sorts of loveliness including garlic and onion and I did have dish envy. Our fish was simply prepared with vinegar dressing smoked paprika and chopped herbs. I think it is fair to say that was one of the best pieces of fish that I had in some considerable time – ultra-fresh, perfectly cooked and extremely tasty. I couldn’t fault it. 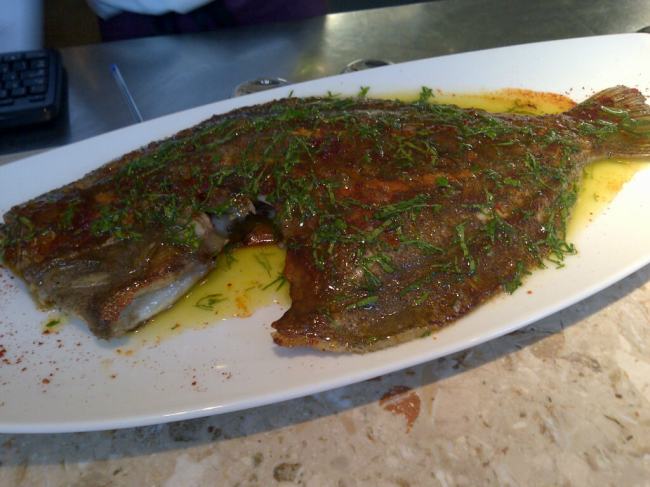 This was actually spectacular.

I didn’t have a dessert although when I saw a chocolate tart being brought to my neighbour, I realised that I had made a mistake. It was intensely coloured and very wobbly, like a grown-up Heinz Chocolate pudding – the sort I used to steal from my younger siblings when I was, really, far too old to be eating them.

Coffee was by Illy and good.

You know, I really don’t feel that I did this restaurant justice. I’d go back for the strongly flavoured garlic dishes, the bread with oil, the tortillas and the gambas ajilo. I’d also do some damage to the great selection of sherries on the menu. And I’d definitely have the chocolate dessert. Or maybe two. Because I need.