Do you know, I haven’t been to the Fat Duck in Bray. I know. Ridiculous isn’t it? Except that I don’t really fancy all that food-as-entertainment chemistry lesson cleverness.  And not to mention that I haven’t been able to get a reservation yet.

And I had trouble getting in here as well. It was only due to the generosity of a kindly banker chap (yes, they really do exist) that I managed to get a table, albeit under the name of a man I don’t know, which confused my guest no end when he arrived early. I have never been known as Adam. Not even to my closest friends.
We were booked into the pensioner/tourist special, the 6.30pm slot. My client has an epic journey home and I like to be in bed by 10. We both got there a bit early. My advice? Don’t.

There is nowhere to wait and the bar is rammed.  The restaurant doesn’t actually open till 6.30 and they haven’t quite got the “meet and greet”  off pat. We were left hovering round the bar,  in a sort of no-man’s land, unable either to get a drink or  to go in to the restaurant. Shocker.  Heaving, it was, with tourists mainly. Funny that, in an hotel.

But that minor irritation was quickly forgotten. Because it’s Heston, it’s going to be clever and slightly quirky and this was the case even down to the light fittings. I forgot to take  photo of the jelly mould nightshades. I could find a picture on the net but I’m a lawyer and I have no excuse.

And the menu is really interesting. This is Heston, recreating historic British dishes, some dating back to the 13thC. So, a culinary history lesson and an inventive fascinating menu. Where else would you see Battalia Pye (c.1660) or Salamagundy (c.1720)?  The only time I can remember actual dates appearing on a menu is in that pinnacel of ’80’s excess,  The Marco Pierre White restaurant, next door,  where, on the menu, his dishes had the date of their creation printed next to them.  As you do.

Thank god that’s all over.

I can’t tell you much about the wine list because I saw my favourite wine fairly early on in the process, so there was no point in looking at anything else. It’s the Trimbach Gewürztraminer Cuveés Seigneurs  de la Ribeauepierre 2004. A real mouthful. In both senses. If you like that sort of florally, peachy, rose-y thing. Which I do.

Having seen it a thousand times in a thousand reviews,  I had to order the Meat Fruit.c1500.

You’ve seen this a million times before. It’s smaller than it looks

This is described as mandarin, chicken liver and foie gras parfait, with grilled bread. I know, foie gras and I could have not mentioned it but that would have been cowardly and I’ve been called many things but coward isn’t one of them.

My dining companion had the Buttered Crab Loaf  (c.1710) with cucumber, pickled lemon, herring roes and samphire. And had this been my husband, my fork would have strayed onto the other side of the table fairly quickly. But it wasn’t and it didn’t for which I’m sure my client is grateful.

Button crap length, according to Siri.

Not for the faint-hearted. So fine for me.

Not just any triple-cooked chips..

This was really straightforward food,  cooked and presented perfectly. As good a piece of meat as I’ve had this year. And I’ve had lots. And the chips? I’m not sure how you make them as crisp and tasty as this – but light and completely non-greasy -as if they have no fat whatsoever in them. And I know there are lots of places saying that they do triple-cooked chips but I think they just mean they bung then into the deep fat fryer three times. They certainly don’t taste anything like these.
And then, dessert. I wanted to order the Taffety Tart,  (c.1660)  if only for the name. Made with apple, rose, fennel and vanilla ice cream, it sounded pretty damn perfect for something other than chocolate.  Had I been with Mr A, I could have   persuaded him to order it,  whilst I did the chocolate thing so I could eat his as well as mine,  but as it was, I felt duty-bound to order the Tipsy Cake, (c.1810) given that the waiting staff had alluded to  the accompanying spit-roasted pineapple no less than three times.

And I’m glad I did. It was a brioche-style dessert, like a very grown-up bread-and-butter pudding, with alcohol and custard (the tipsy bit) with a side of the said spit-roasted pineapple. In fact, for me, the pineapple was the least memorable thing about this dish It was the brioche wot did it –  meltingly light and airy. I’m still thinking about it now. 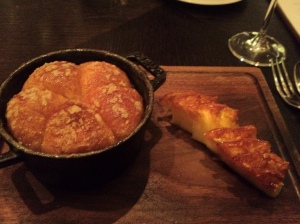 Spit-roasted pineapple. Not all that. Unlike the rest of it.

And then there was a chocolate-y thing, t go with the tea,  which was a pleasure. And then rosebud tea. Pretty pretty pretty.

And there was, I confess,  a bit of stickershock, but it didn’t feel over the top, for the quality of food, excellent service and the elegant room. It’s a perfect place for a treat. 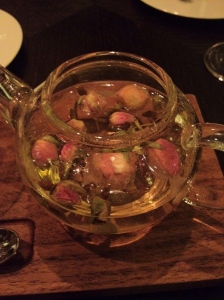 I wonder if the ones in my garden would taste like this. Probably not.