Lima. I’ve never been to Peru. And I had meant to come to this little slice of it,  last year,  but the table turnaround policy (two hours) didn’t work for my pre-Xmas client dinner and they had only mentioned it when they phoned to confirm the reservation. So I got into a mini-stroppette and booked somewhere else.   It has to be said that  a two-hour policy might, in some cases, be a bonus and indeed there might be a time when I choose it deliberately. Bear that in mind.

Very fashionable, Peruvian food. Almost a trend. Not only this, but Ceviche, and Tierra Peru, in Islington. And whilst at Ceviche, last week, Twitter,  in that know-it-all way that it has, told me that I was in the wrong place.  Go to Lima, it said, it’s much better. And having now done just that,  I can tell you, helpfully that Twitter is right, but it is also wrong. They are both good and whilst there is indeed ceviche and tiger’s milk in the centre of the Ceviche/Lima Venn diagram, they are not, in my view, comparable.  One is delicate fine-ish dining and the other is street food/relaxed.

Greeted at the door by a woman who has yet to master the art of smiling, my first thought was,  oh, here we go.  That  fear was fairly swiftly eliminated by the gentle, patient waiter who answered all my (many) questions and explained in detail how everything was cooked.

In all his excitement, he did, however,  forget to tell us that there were some daily specials and it was only after we had ordered that we heard next door being given the choice of a number of extra dishes and I had a little bit of dish envy.  Not that there wasn’t enough choice on the menu but hey, it would have been nice to know.

Lima is run by Virgilio Martinez,  a chef who opened a highly regarded restaurant in Lima itself in 2010, then another in a place called Cusco (no, me neither) and then this.

In the restaurant mecca that is now Fitzrovia, this is a small, welcoming space.   At night  it looks quite different to the pictures on the website – much more atmospheric and cosy, decorated  in muted and subtle colours but with little splashes of South American colour and design dotted throughout .

At first glance,the menu looks exotic and inaccessible, containing such things as Sacha Inchi oil, and Huacatay herb, but the staff are extremely helpful and really,  the food is nowhere near as challenging as the menu – in fact I’d say it was more conventional than I’d expected, given the descriptions and the list of ingredients.

Even though I actually wanted everything on the menu, I only ordered three starters. Tuna Causa, which was yellowfin tuna, blue potato ghoa cress and ginger confit;  Organic Salmon Tiradito, with rocoto pepper, lime, samphire and red amaranth and,  because I really needed, Artichoke Amazonia, with fava beans, white onion, tree tomato and molle pink pepper.

Tiradito is very similar to ceviche, in that it is marinated fish, but more thinly sliced. The sauce was hot and sharp and delicious. The artichoke came slathered in what looked like custard and I have no idea what it actually was but again, the sweet sharp taste was  interesting against the delicate artichoke, presented like a two-fingered salute.

C, who never knowingly over-emotes,  was very enthusiastic about the tuna, which came in three little towers, mashed potato at the bottom, tuna then chopped tomato. If I’m very frank, I can’t say that I could taste the tuna particularly,  but the whole dish was interesting and textured.

Then Amazon fish “paiche” with seaweed butter, Annato, Cacao  porcelana (chocolate)  and white kiwicha. I believe that the kiwicha was the miniscule quinoa which surrounded the dish. This was a fried white fish, similar to bream, in a rich buttery sauce. Despite the exotic-sounding ingredients, , the dish didn’t contain any strange flavours and the cooking was classical in style.   I could have been eating it at any modern European restaurant. That’s not to say it wasn’t entirely delicious, because it was – but it wasn’t as unusual as I was expecting, given the list of ingredients. And it looked pretty as a picture, with a lot happening on the plate. Full marks for presentation, across the board.

C ordered lamb shoulder “seco” which we were told was taken off the bone and slow-cooked for many hours. It came with eco-dried potato, dried on a mountainside in the sun, apparently and cooked with white grapes,  pisco  mosto verde and crazy pea.   Like a very quirky smashed potatoes with grapes.  Well,  I know that my dreadful picture makes it look like a piece of something unmentionable on a bed of chocolate sludge, but it was a really great plateful.

Crispy and spicy on the outside but tender pink on the inside – melting, flavourful and indeed wonderful. It went brilliantly with the white grape and potato and I was only allowed to have one mouthful. C has not quite bought into the “what’s mine is mine and what’s yours is mine” food philosophy that I have been trying to instil in him for many years. I haven’t given up though.

Neither of us usually do dessert (well, not on any day with the letters “day”in it anyway) so it was felt necessary to order the Cacao Porcelana peru cacao 75%, cinnamon cream and blue potato crystal, together with the Dulce de leche ice cream, with beetroot emulsion and Andeaen maca root crust. Now you see, had you not told me it was Andeaen maca root crust, I’d have said it was crumbled digestive biscuits and none the worse for that. Unconventional description, conventional taste. The beetroot emulsion, which to me was an unnecessary addition, sat hiding under the crumbled biscuit but it was the ice cream, which made me go quiet. It had a lovely smear of dulche de leche at the side of the dish as well. Not quite enough for me, mind you, but then, I am a person   who will order three starters and regret stopping there.

The chocolate mousse (for that was indeed, what it was ), was truly excellent – buttery rich and intense. I’m not sure that the blue potato crisps added anything except a bit of exotica and visual excitement to the blob of chocolate, but perhaps they felt they had to Peruvianise it a bit. Who knows.

I have been singing Lima’s praises since eating there.   Whilst the menu may be off-putting to the less adventurous amongst us, the food certainly isn’t and it’s worth getting the waiter to run through the menu choices.  It’s not cheap (count on about £60 a head with booze) but it is clever and the chef makes an effort.  It’s formal enough for a business lunch in the daytime and fun enough for a meal in the evening in your real life. Go on, you’ve always wanted to go to Peru haven’t you? 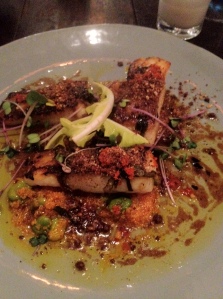 Fish. From the Amazon.

It looked much better IRL

Chocolate mousse loveliness with strange potato bits in it