And now, I’m going to do a version of the conveyor belt on the Generation Game. Remember that? You had to look at a whole list of items as they whooshed past you and then remember as many as you could so that you could take them home. My version is to try and remember as many of the dishes that I had at Fino this week, without resorting to looking at my photographs. What fun.

First up, padron peppers. I am always going to order these in any tapas restaurant, wherever I go, whoever I am with. I can’t believe that there are people in London who still haven’t tasted them. There is no excuse.

These were as they should have been; fried to the point of being slightly charred, with salt flakes and no dodgy undercooked bits. Manchego cheese -not my choice- came with some decent Membrillo, set out prettily in dinky little triangles. This was not the most exciting dish I have ever tasted, but it did what it said on the tin. I wouldn’t bother myself. This is one you can do at home.

Some wonderful Ballota ham – moist, fatty flavourful – I could have ordered and demolished many plates of this, but at £18.80 for a relatively small plate, I settled with the one. And we were advised to have some bread – can you believe that – being advised to have bread – as if I wouldn’t automatically choose it – but in all the excitement of the variety on the menu I had, I must confess, actually forgotten.

Suffice it to say that we finished the bread within the first 10 minutes and needed yes, needed, to order more. The bread and the olive oil was delicious – a sharp punchy peppery olive oil and beautiful densely-textured warm bread, with a salty crust.

And then pork belly – two large chunks, side-by-side, like a pork belly pair of vanilla slices– unctuous, tender with a very crunchy, crispy exterior and melting middle – tasty and rich – this was perfect.

And then arroz negra, black rice with squid. We both thought this was a great dish. A rich fish stock, the rice cooked just so, with an intense, almost meaty flavour. It came in a small copper pot and was near as dammit perfect. Sitting on top of the rice was two tentacles of squid, which we both forced ourselves to eat, both not being fans of tentacles per se. I managed to catapult the large section of the body of the squid onto the centre of the table which was not ideal.

I very quickly scooped it up onto my client’s plate, leaving a nice puddle of stock bang in the centre of the table. It’s a close call that, whether or not to take the squid from the table yourself, or to put it straight onto your client’s plate. Did I fail the Mr Manners test? He didn’t say anything. I know he noticed. You couldn’t not.

And no matter really because we covered the mess with some more of the many plates that we ordered. One of those plates was, of course, chips . They came with a dipping sauce. I managed to leave some. That that is how unmemorable they were.

Because we had to, we then had tortilla. There were four choices on the menu but we chose the spinach. I don’t know why when there was one with chorizo but sometimes I just like to sabotage myself. It was perfectly done, the spinach was combined with soft fried onions and the centre was nice and runny, or Ronnie, according to my voice recognition, which I think I prefer.

My companion was not overly impressed with it but I thought it was good and the reason that we left a quarter of it was because (and you will be surprised to read this), we had already over-ordered.

And lets not forget the healthy option, the spinach with chickpeas with some chorizo in it. I wouldn’t go out of my way for it. A filler.

And then dessert, because we really needed and because I clearly will not be happy until I literally have nothing to fit me in my whole wardrobe except tracksuit bottoms, I had the Santiago Tart. My excuse was that I had made my own Santiago Tart a few months ago and I wanted to see whether this was any better.

I’m sorry to say , using meaningless terminology beloved of poor lawyers everywhere, that it was actually substantially and materially better than my home offering – like a very grown-up Bakewell Tart, this is almond-based with a delicate pastry with a side of chopped almonds, dried apricots and sultanas and a little custard-y sauce on the side. Actually, it was excellent. My client had crema catalana, which was a grown-up and sophisticated creme brulée. I thought he was going to lick the plate, but he stopped just short. After squidgate, I wouldn’t have said anything.

I recognised only about two of the white wines on the wine list and one of them I ordered – a white Rioja. Another evening and I might just let the sommelier go mad, but this was not that evening, as I had to be up the next morning at 6:30am to see a man about a bathroom.

So, a slight bit of a over-ordering, a couple of gin and tonics, and the bill comes to a whopping £157. I’m not sure we saw that coming.

I’d say this is more for your client lunch/dinner, where you can book a table (notwithstanding the 2 hour table policy. Despite being tol, when confirming the reservation, that the table would be needed after two hours, the restaurant was still half-empty when we left, two and a half hours later.

I do so hate that. I understand why restaurants do it, but it’s very rare that I’ve actually ever been moved and it’s up to the restaurant to make sure that the food comes quickly enough that you don’t overstay the allotted time. The only time I’ve come a cropper is at La Petit Maison, where there is nowhere to move to. All it does is make you feel anxious that you’re going to be rushed when you don’t necessarily want to be.

Rant over, service was knowledgeable, enthusiastic and friendly and seemed to be mostly by Spaniards , which was great. The restaurant is in a sub – basement, which means your mobile device will not work (really, this is a crisis for some people). The decor is interesting with lots of blonde wood and decent modern art. I didn’t feel crowded and it wasn’t noisy and I wasn’t aware of any music. Yay. A restaurant for grown-ups.

And because I actually did take some pictures, here they are:

Padron peppers. The photo doesn’t do them justice

I know. A slab of bread. But it was really good

Wondrous meat. I don’t care if it is processed. 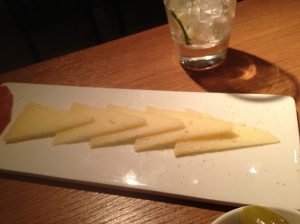 Manchego. I can’t get excited 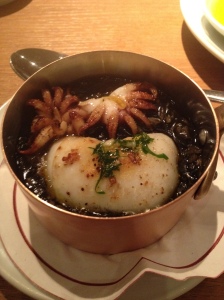 Black rice with squid. Yes, it was that big bit I flipped on to the table 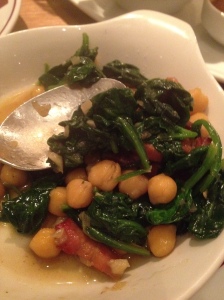 Spinach chickpeas and chorizo. A little bit so what.

Santiago tart.Worth a detour. Worth the calories.