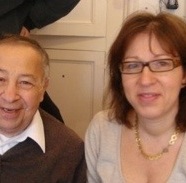 Dad, food and me.

My father really  loved food. His Humpty-Dumpty shape until the age of 70 was testament to that and he always joked that he’d only be able to lose it if it was a matter of life and death. And when he was 70, he was told that it was just that. So he lost just under seven stone. No fuss, no messing, he just did it.

He’d grown up surrounded by food, his mother  the owner of a grocery shop in Hightown, a fairly impoverished  area in the centre of Manchester, in the shadow of the infamous  Strangeways prison.

His father Harris had died when he was seven and there was never any money to talk of, before or after that, but there was always food. Part shop, part soup-kitchen, my grandmother never turned anyone away. The week before she died, she was still visiting her friends in an assortment of  old-age  homes, taking them home-made food. She was 86.

She cooked the food of her childhood, the food that everyone cooked then, or at least everyone she knew. All your Ashkenazi specials: chicken soup with kneidlach and lokshen, chopped liver, tsimmes, chopped and fried and gefilte fish. Shtetl food. Comfort food.

And growing up, I remember my father coming home every Friday night, laden with bags from M&S. In my world, it wasn’t  normal for fathers to do any food shopping, short of going out on Sunday morning for bagels and smoked salmon, but he was entirely at home in any retail food scenario.

He had built up  a chain of carpet shops and many of them were surprisingly close to an M&S. Not only did he want his shops to be next to an anchor tenant in each location, but the ability to drop in and pick up a few bits and pieces from the food hall was an added bonus.

And when I started my working life, tantalisingly close to Marble Arch, he’d call me  to see if I had seen the latest new launch from M&S,  telling me to go to the flagship store, that minute, to check it out and then call him back to report on it.

I discovered that he was on first name terms with the female staff in the food hall of the Liverpool branch when I went once with him to pick up the thirty Crème caramels they had put aside for him. Put aside, note. There were five of us at home at that time and two of us didn’t like them.  These women of a certain age, fussing over him. It certainly didn’t equate to any experience I’d ever had in an M&S then or since. And it wasn’t because he looked like Cary Grant. More a cross between Bob Hoskins and Danny de Vito and  funnier than both.

And when we unpacked the (at least eight) Friday-night shopping bags,  there were always empty packets. Half-eaten bunches of muscat grapes (“try these, you’ve never tasted grapes like them“) ripped-open packets of cake, remnants of chocolate bars. He’d had to sustain himself on the long trek back from Birkenhead to Manchester.

And there was also the traditional Sunday morning bagel smoked-salmon and pickle-meat fest. When very young, this meant a trip to Titanics (motto: you shop, we schlep) back where he grew up, in Hightown, near Strangeways prison. Big sides of smoked-salmon, ready to slice, vats of pickles, counters of cold meats and huge salamis. And when we finished, he couldn’t resist a little drive round, pointing out an old school here, a disused synagogue there, memories from his childhood. And Titanics? It’s still there, but I can’t go back. I want it to be 1970.

And because nothing relating to food could be left to chance in my father’s world, mid-morning, he used to phone in his dinner order to my stepmother, who would cook him whatever he wanted. This wasn’t as onerous a task as it sounds, given that nine times out of ten what he wanted was chicken and frozen peas.

And it had to be on the table within minutes of his arrival home from work. As soon as the car hit the driveway, we’d go into kitchen overdrive, like a well-choreographed dance, to get the food on the table  on time.

For someone who liked to eat so much, it was surprising that he never really bothered to cook. He always told us that he could, but I didn’t see him do so much as boil an egg. There was that one time he made lemon curd, but there was more curd out of the jar than in and the experiment was never repeated.

And why would he, really, when he always had someone to cook for him? My father was very good at letting himself be looked after. But then, as he would tell you, in case you might have forgotten, he looked after everyone else.

And there was no such thing as portion control. He would never eat a single orange. It was always four. He’d cut them in half, suck the life out of them and present the plate, with the halves turned inside out, clean. And chestnuts. Together with liquorice and the oranges, a holy trinity of fart.

And when I went away to school and moaned about the crappy apples, regular food parcels used to arrive, express delivery of course, full of Washington Reds and pink grapefruit,  from M&S, of course. Luxury.

That was the thing with my father. You only had to mention that you needed something, or were thinking about getting something,  and without telling you, he would go and get it. Whether you really wanted it or not. Without checking which one you actually wanted. And once you said you needed something, he kept on buying it for you, over and over. Need a document holder for work? I’ve got four, picked up at  his favourite bargain-hunting ground, TJ Hughes.

And with the internet, a whole new food world opened up for him. One of his favourites was something called helzel. Chicken or goose-neck skin, stuffed with a mixture of matzo meal, schmaltz, (chicken fat, solidified) fried onions and bits of meat, sewn together and roasted, it’s the nearest thing Jews have to Haggis. Every  artery-clogging mouthful taking you a step nearer to a heart attack.  He loved it. We found that we could order it online from Blooms and have it delivered to Manchester. Suddenly, the internet made sense to my father.

But then, at 70, he got ill. He had lost the seven stone because he discovered that he had PKD, polycystic kidney disease. It’s hereditary; one of those incredibly common, but little-known progressive and incurable illnesses. The deliberate weight loss was so that he could get a replacement kidney. And the loss was so swift and so dramatic that people wondered whether he was suffering from cancer.

He’d pre-empt them, joking that he wasn’t dying of cancer and had actually dieted, for the first time in his life. But within a year of the weight loss, he really was ill, with prostate cancer. Which meant that there could be no kidney replacement. And then, shortly after that, throat cancer.

And of all the illnesses that could have beset my father (and let’s not forget the hernias and the three hip replacements) the throat cancer was the most cruel. Because of the prostate cancer, only radiotherapy was possible for his throat. It destroyed his tastebuds and made it impossible for him to swallow properly, as he couldn’t produce much saliva.

For over a year, he could only eat porridge, and then slowly, other soft, wet foods. His appetite was shot. So were his tastebuds. Telling me the food tasted odd, or off. Only being able to eat tiny amounts. Gradually introducing more into his diet. Many long conversations, working out what he might eat that didn’t taste odd. Me trying to get him to see food as medicine, not as pleasure.

And in between this, going to work most days, running his business, refusing to accept his incapacity and railing at his lack of mobility. A brain as sharp as a razor, trapped inside a failing body.

And then slowly, little improvements. Eating a tiny bit of Dover sole or a baked potato a major cause for celebration. Calling me to tell me what he’d managed to eat. Any food beyond porridge a major victory.

And before he got ill for the very last time, he was eating a wide variety of foods, to the point where he could actually go to a restaurant without having to check the menu in advance. Telling me what he’d eaten at Cicchetti’s in Manchester, or at the local Italian. Enjoying himself. No salt, no citrus, nothing acid, plain white fish, maybe a cream sauce but no lemon in it. No fruit. But eating out,  a triumph!

I used to talk to him about food and asked him how he felt about not being able to eat normally any more, given his lifelong love affair with eating. He said that he’d eaten everything he’d ever wanted to eat and that it didn’t matter. It’s better than the alternative, he’d say, I’m still here, he’d say,  still telling the tale.

That was one of his favourite sayings. I don’t think there was a conversation that we had in the last year of his life where he didn’t say it. And in hospital, for the last three months of his life, he gave up eating altogether. I think that is when I knew he’d had enough and wanted to go, despite his protestations to the contrary. Food was love to my father and when he couldn’t love anymore, it was time to go.

He used to say to me that he would have given everything he had, for five minutes more with his mother. Just five minutes.

I understand, now, how that feels.

← Naoe. Not for the faint-hearted. The Company of Strangers. Quo Vadis. →