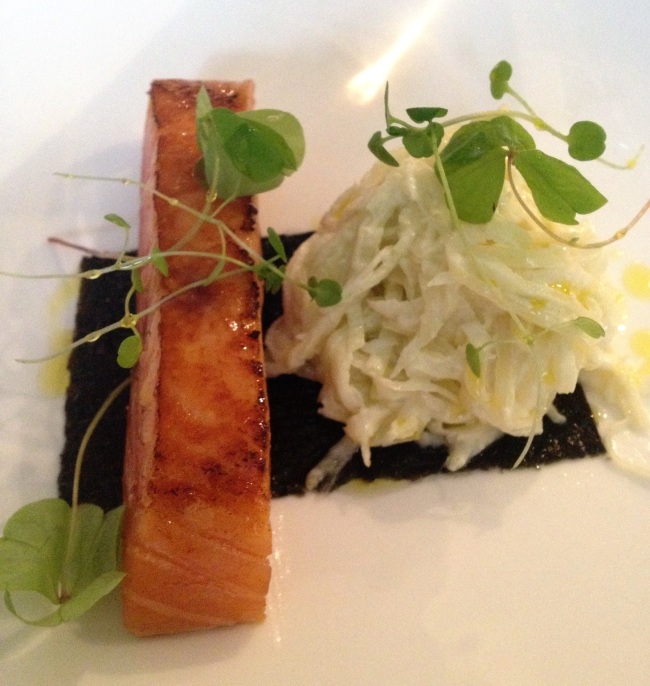 Salmon. Smoked on the rooftop of Bentleys. Who knew?

Lunch with K, ever-elegant elder statesman of German banking. Notwithstanding that I could have murdered a burger and I wanted to take K to somewhere unexpected, I sensed that MeatLiquor might not be the most suitable venue, so set to thinking about where I might go which was business-y, but not too formal; Mayfair, but mid-priced and most importantly, walking distance from my office.

Corrigan’s Mayfair is within the required zone, so I plumped for that. I gave up on trying to find something unexpected in Mayfair. The only thing that’s unexpected when it comes to Mayfair dining is a reasonable bill.
I’ve eaten at Corrigan’s twice before, both times in the private room. Ooh get her, you may say, but it’s true and both times were, I have to confess, rather raucous and rather enjoyable. He does a good private dinner, does Mr Corrigan.

The main dining-room is dark, clubby and fairly businesslike. Quite male in feel. Comfortable banquette seating and the sort of glass-blown lampshades you get in Starbucks but obviously more expensive – you know what I mean, those glass bells with bits of brown swirl in them.

It was a Monday, after all and I didn’t expect it to be full, but I didn’t expect actual tumbleweeds. I hate being the first in a restaurant. I wasn’t expecting it at 12.45. By the time we got going with our main course, only another 6 or so tables had been filled. The majority were suits, but there were also a few stray tourists.

Maybe it’s not in the right location. Or maybe this was just a bad day. Sometimes it’s hard to know why a restaurant doesn’t hit the spot, but I think here, the empty tables and the fairly formal atmosphere, not to mention the steep prices, makes this a little less than welcoming. If you’re looking for atmosphere, you’re in the wrong place.

We decided to really go for it and have half a bottle of wine. I confess that I had overlooked the wine by the glass/carafe section, which has some reasonable options, but went straight to the half-bottles. The cheapest starts at £39, rising to £64 and then £75. There are only three on the white section. Jaw-dropping, actually. So with service, the cheapest half-bottle works out at £43.87. I think they should look at that. Really.

And there is a set lunch menu, of which more later. From the very British, seasonal menu I chose rooftop-smoked salmon with horseradish sauerkraut and apple. So did K, who as a German, feels that he has a patriotic duty to order it. This was not sauerkraut as we know it, but it was fairly similar to rémoulade and good with the salmon, providing a sharp counterfoil to the rich oiliness of the fish, though I’d rather have had the real thing, as advertised.

The salmon was a thick, solid tranche. A little too thick and it took some effort in the cutting. It was perched on a bed of nori (seaweed), which I liked very much. It also came with very good dark rye bread, spread with seaweed butter. Notwithstanding the toughness of the salmon, the flavour was good.

And then my main course of lamb. I’d been torn between this and the gnocchi. I made the wrong choice. The gnocchi looked pretty, with porcini mushrooms and basil and came sprinkled with Parmesan.
The lamb came on a bed of pea purée, with lettuce, broad beans and fresh peas. I really liked that part of the dish. It tasted fresh and green. The lamb came very pink and quite tough. Good flavour, but not a pleasure to eat, because too much like hard work to actually get to the point where you could swallow it

And then because one must, dessert. We ordered strawberries and cream, to share. It came with a Chantilly cream, a strawberry sorbet and a home-made biscotti and to me, this was the highlight of the meal and I never thought I would hear myself say that, about something which is mainly fruit. Each bit of it worked, and the strawberries were dressed well and tasted like summer.

And a lovely touch; warm madeleines, still in the baking tray, brought to the table. They were excellent.
I confess I was rather surprised when the bill came to a rather unexpected £166.22. We had ordered from the set menu, plus two starters, one dessert, an extra side and tea and coffee.

Checking the menu, I see that the small portion of Jersey Royals was £9. Sticker shock.

I really hate that – you think you’re going out for a set menu and a reasonable lunch, you deviate slightly from it have half a bottle of wine (albeit not cheap) and you find you’ve spent about 60 quid more than you expected.

I have to say, this restaurant feels a little unloved. Maybe the great Mr Corrigan is spending too much time at Bentley’s, his new love. I’ve met the man and he is larger-than-life and everything a chef should be – passionate, driven and extremely committed, but I’m not sure whether he’s ever in the kitchen here anymore. It doesn’t feel like it.

Best for: a formal client lunch where money is no object and where you need privacy. The table next to you will be free
Worst for: a relaxed lunch in real life
Food 6/10

← Bird Of Smithfield. Something for everyone. Il Baretto – Bland in Blandford Street →