I’d been up till two am the night before, discussing the merits of good lighting with Hugh, my new BFF and the man who is going to help make my house look mid-Century-modern-fabulous, so I really hadn’t planned on being sociable, especially not with clients.

I’d been to the opening party for a new development I’d done the legals on and after that, taken out by the developer for a great Chinese meal and after that, the choice of a bar in Mayfair, or home.

I ignored the alluring sign that said big night out, because the small print read hangover and a two-day recovery period. And I had a 60 page report on my desk to review the next day. Sometimes I even bore myself.

But, for all the use I was in the office, I might as well have gone to the Mayfair bar and after a morning of unproductive faff, a lunch invitation was really too hard to turn down.

And the lunch was with lovely clients, one a developer, the others his bankers. Also clients. Confused?

The banker wanted Italian and I wasn’t in the mood to argue, or make suggestions. For once.

I’ve been here countless times, because I used to work in Marylebone and it was client-friendly and fairly reliable. Fairly traditional Italian food, meat, fish, pasta and a Robata grill. Which you’re paying for.

My favourite here is undoubtedly the pizza, from a wood-fired oven. I’d be happy come here just for that.

And pizza and champagne is a surprisingly good combination and one could quite happily sit upstairs in their tiny bar (the Il Baretto) and get sloshed on bubbly and mop it up with some lovely carbs. But once you go downstairs, something else altogether.

The décor looks a bit cheap to me. A bit café-style and not inviting. It certainly doesn’t prepare you for the prices. When it opened, it was cheaper. But prices have crept up. And there are other irritations, if not affectations.

“Il Baretto is situated in the heart of Marylebone on Blandford Street, prestigiously placed between Marylebone High Street and Bond Street”.

Unless the layout of Central London has undergone some miraculous alteration since I last looked, that is a statement of pure fabrication.

It is actually prestigiously placed between Marylebone High Street and Gloucester Place and is a damn sight nearer to Baker Street than it is to Bond Street. But that doesn’t quite have the same ring does it? And ‘prestigiously placed’? Shoot the copywriter.

Well, I think you’d know by now if the food was amazing, because I’d have mentioned it.

The banker ordered a pizza for us all to start with. For a control-freak, this ordering by other people on one’s behalf is anxiety-inducing in the extreme, but actually, it was a good choice. Decent thin crust and a good, gooey sloppy middle, I could have had a lot of that.

I sampled the bread basket (extra) which was not bad. Not Locanda, but not inadequate. It comes with some reasonable pugliese, some focaccia and some of that very thin flatbread that tastes of nothing, but that you have to keep stuffing into your face just because.

Then, because it was all about carbs and comfort, I chose veal cannelloni. I was worried that there would be too much food, but that was a worry too far. There is no choice as to pasta portion-size and this was four sausage-sized tubes of veal, covered in a bit of bechamel sauce and a few pea sprouts.

The veal was a little dry and crumbly and could have had more seasoning. The bechamel was good, but there wasn’t enough of it. When I have cannelloni as a main course, I want a big bubbling dish, covered in cheese, and stuffed with whatever filling it is I have chosen. I want something homely and generous. I want to feel like I’ve eaten too much. I want to be full.

I want never gets, as my parents used to say. And here, they were spot on.

Because I needed to feel like I’d had a proper meal, i.e. one where I’d eaten a bit too much, I bulked up with the fried courgettes. This is the lying to yourself that these are vegetables side dish. Not too greasy, these were long and delicate matchsticks of crispy-coated courgette and were my favourite part of the meal.

And then affogato. Espresso coffee, with ice cream floating in it. They asked me whether I wanted one two or three scoops. The alarm bell should have rung right there. Affogato is, traditionally, a cup of very hot, very strong espresso, with a scoop of vanilla ice cream. It is not a frosted iced dessert bowl, with a little ball of ice cream at the bottom and a bit of lukewarm coffee to pour over the top, which freezes immediately it hits the bowl. Poor.

Why mess around with it? Like the tiramisu. Have a look. What is that? I didn’t taste it and it may have been utterly gorgeous, but really. What’s wrong with the classic dish? Over fussy and over-presented, I got annoyed just looking at it.

Or maybe I was just still thinking about at the comment from banker client that the (admittedly boyish-looking) developer client and I looked like mother and son; a comment that destroyed my day. I’m booking the Botox.

And this isn’t cheap, for the quality of the cooking. Unless you stick to the pizza, you’re not going to get much change from £150 for two, with a moderate bottle. And when you compare this to Zafferano, or Locanda, or so many other places who do this sort of food but better, that just doesn’t make sense. But the expense-accounts and the ladies who lunch here don’t seem to care. 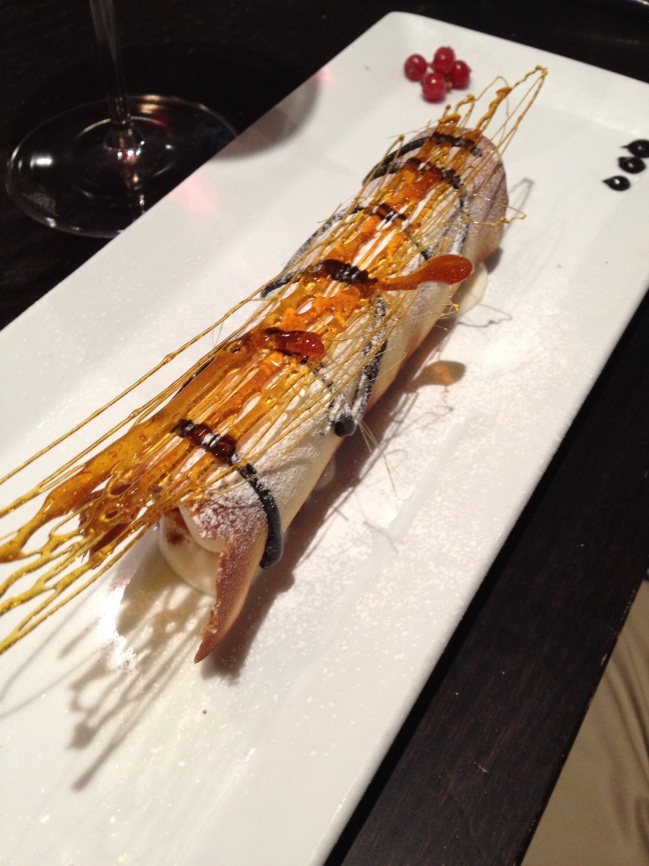