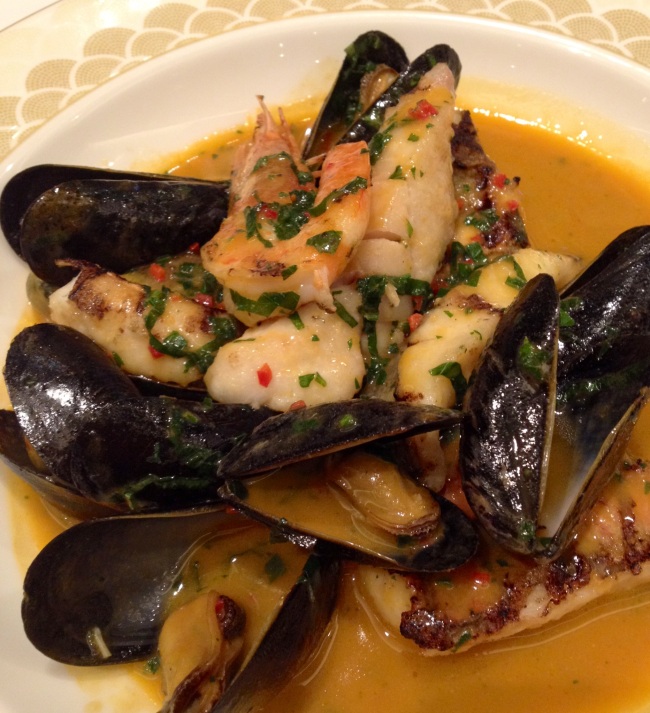 When I think of Scotts, I immediately think of two people. One is Nigella, who, if the Daily Fail sidebar of shame is to be believed, practically lives here with her husband, “multimillionaire advertising tycoon” Charles Saatchi. The other is Richard Caring, who also happens to own, on the same road, the Mount Street Deli and the private members’ club, George. I’ve been to both. Obviously.

You’d think that Caring had been around the restaurant business for years, wouldn’t you, such is the size of his fame, not to mention the spread of his portfolio, but no. It seems that he started his restaurant-buying spree in earnest in 2005, after his near-death experience in the Asian tsunami. After which he is reported to have given £1m to the relief fund. He’s a big philanthropist.

His fortune was made in the rag trade and he’s a good mate of Sir Philip Green, but you could probably have guessed that.

Even though he keeps coming across my radar, both professionally and personally, I haven’t, until now taken a really good look at the Caring Empire and where it’s going. The plan seems to comprise the creation of a very large portfolio of restaurants and clubs, not only at the luxury end, where he owns, amongst others J Sheekey, the Ivy and Le Caprice, but also at the midmarket level, where he has an interest in the Côte chain and also, if the internet has not failed me, Carluccio’s.

Scott’s is also to be found in Abu Dhabi and the Ivy in Dubai. Bet you didn’t know that. This is a global brand. He doesn’t lack ambition, Mr Caring. I wonder if he has a white Persian cat as well. I could lend him one.

Those of you who know me will know that, despite all rumours to the contrary, glitz doesn’t really do it for me, but there is a certain slice of London which absolutely loves it and who knows, you may be one of them.

I’d been to the original Scott’s in the late 1980’s, when it really was an institution. Old-fashioned and formal it was, but to my inexperienced and naïve self it seemed fabulously glamorous and grown up. I remember champagne, silver domes, a massive plate of prawns and if I’m honest, not much else.

I was taken by a lovely client, old enough to be my father and who often behaved as if he was, giving me unsought-for but often sensible advice about my personal life. He’s dead now, but I still have fond memories.

I cut my law-learning teeth on his large portfolio. He was very patient. Haggle with me dear, he used to say; I can’t pay the fees, just like that, so load them up by 10%, I’ll haggle and then we’re both happy. Bless.

And the fees aren’t the only thing to have changed since the 1980s. Scott’s has been glammed-up for London’s monied elite. Glitzy yet understated, it feels reassuringly expensive. If it were a car, it would be a baby Bentley.

Once you have got past the doorman (fully liveried, naturally), there’s a seafood bar in the middle and beautiful mosaic tiles on the floor. Mirrors everywhere, so that you can see yourself and everyone else. And this is the sort of place where everyone stares at everyone else, as soon as they walk through the door, or indeed when you walk past their table. Maybe they’re hoping for a glimpse of Nigella.

Scott’s is all about the seafood. It always was. There’s a vast menu of fishiness. Everything you could imagine and then some. Oysters, caviar, seafood platters; all present and correct. The cooking is more Italian than it is anything else, although it’s sort of modern European, as much as it is anything particularly definable. As is its clientele.

I ordered potted shrimp. It came de-potted. I was a little surprised at how much pale yellow there was on the plate. Prawns drowned in clarified butter. Far too much of it. And a few little rather inadequate toasts on the side, which shattered as soon as the (rather stiff) buttery mixture was smeared over them, so I made a mess on the tablecloth. Not the first time. I had to raid the bread basket for some of the rather mediocre bread, in order to be able to finish it off, because you really couldn’t eat this from a fork, unless you really wanted a mouthful of fishy butter.

And then spiced mussel and saffron stew with char-grilled seafood. I had considered ordering Dover sole but I looked at the price. I would have felt duty-bound to have ordered the large one (in case I would be left hungry – you understand). But at that price, I just couldn’t, especially as I wasn’t paying.

But no matter, because this I liked. Firm pieces of white fish, prawns and mussels, with chopped herbs, this was simple, yet well done and tasty. The seafood was extremely fresh and firm and the stock was balanced and strong, yet not overpowering. Like a slightly watered-down fish soup. But the fish didn’t taste char-grilled and it was only when looking back at my notes that I remember about the char-grilling. Oh.

G reminds me that we usually spend a large proportion of our lunch talking about weight; the pain, the gain, the losing. He’s known me for at least 15 years and least six dress sizes. We hadn’t talked much about weight this lunch though, which was a change and either his wife has got him extremely well-trained, or he knows how to say the right thing or shocker he might actually really think it, but he told me that he thought I looked better at this (rather ample) weight, not the thinner version that I was only this time last year. A client once referred to me as zaftig. I’ve decided to run with it.

It would, therefore, have been the height of rudeness not have acquiesced to his request that I share his ice cream with hot chocolate sauce and honeycomb. Good thick honeycomb, like old-fashioned wafers, dotted round the ice cream and rich, good hot chocolate sauce in a separate silver pot. Sometimes the simple things are the best and this was a posh deconstructed ice-cream Crunchie. What’s not to like?

I’ve eaten in the modern incarnation of Scott’s five times now three times as a guest and twice on my own ticket. Paying for myself, I have felt hard done by. I suspect you might feel the same.

I have no idea who the chef is and it’s not a place that sells itself on the quality of its cooking. It trades on its name and the celebrity sightings. My client thought he’d spotted two. Both of them turned out to be lookalikes. This looks like a great restaurant but it isn’t, which is a shame for all those normal folk who save up thinking that this is the place for a special celebration, an institution even. It hasn’t been that for some time.

UPDATE: I don’t think we will be seeing much of Nigella here any more, sadly. Or at least, not with Mr Saatchi.

Butter. with some prawns.