I’d walked past this on my way home. It’s in that that non-area of Marylebone, leading to Edgware Road tube station. I was surprised that I’d never heard of it and thought it was some dodgy little sushi operation.

I asked Twitter whether there was anyone who had heard of it, or who had actually been there. I immediately received some very positive responses and one in particular, from another lawyer who seems to be as interested in food as I am. Which is saying something. In fact, there is a whole community of fairly food-obsessed lawyers out there on Twitter. You know who you are.

It happens now and again, that something really good just doesn’t get onto the radar. And given the amount of restaurants in London, I suppose that isn’t really surprising, but I did feel like a complete food failure.

So it made absolute sense that my dining partner for my first Dinings adventure would be that very same lawyer.

This is not a big operation. There is a sushi bar as you walk in on the ground floor and you go down some dodgy wooden stairs to a fairly cramped basement. Black and brown feature heavily. Do not go looking for a private conversation.

The chef hails from Nobu and if you like that style of cooking, you will love this. This is Nobu, by way of Peru. Very on-trend. In fact ahead of the curve because it has been here way before the likes of Lima and Ceviche. And notwithstanding the very non-Nobu decor, the prices are comparable i.e. it doesn’t come cheap.

At first glance, the menu is a little confusing. There are some bar snack type appetisers, including Padron peppers, with chilli Salt, which obviously I had to order, together with cold starters and hot starters – tapas- style, then main courses, then various types of sushi and sashimi. You could have a completely traditional Japanese meal, or you could have an entirely unusual Peruvian/Japanese experience. We combined both.

Skip the taco-style chips at about £4 a piece – one bite and they are gone. Not worth it. Likewise the cocktails. Not good value. And I didn’t write it all down – and believe me when I say all, there was a lot – but stand-out dishes were the Dinings take on a Caesar salad, the crispy softshell sushi, and the unusual open sushi with crispy scallop on top. In fact, I liked this dish best of all and the sauce was reminiscent of one I had at Lima. Which is not entirely surprising given the Peruvian influence on the food. Beautiful fresh scallops deep-fried in tempura batter and covered in a piquant sauce, atop a piece of vegetable sushi. The Blythburgh pork belly the only slightly disappointing dish on the menu – nothing wrong with it – just not as interesting as some of the other concoctions.

Many of the dishes on here were very familiar from Nobu – the black cod for example and the wagyu beef and everything was done well and presented properly. There were also dishes here that seemed to me to be unique, Peruvian/Japanese not being a combination that is available anywhere else as far as I know. But it works surprisingly well.

I was really pleasantly surprised at the quality of the food, the delicacy of the presentation and the somewhat ambitious menu. Given the surroundings, the prices seem rather steep but I couldn’t fault the food at all and the level of expertise displayed by the chef–I would never advertise myself as an expert in Japanese cuisine but this seemed to me to be of the highest quality. Just don’t expect luxury and comfort.

We looked at dessert, but decided against it, in favour of yet more sushi because we really needed. That was somewhat straying into the one more waffeur-thin mint territory, but what the hell. We managed to eat it all

We ended up spending something north of £100 a head, which included a £33 bottle of wine and 2 cocktails each at £10 so, eating sensibly and not going for it, the minimum that you would get away with for a reasonable amount of food and stuff that you actually want to eat would be about £80-90 a head.

So satisified, and much lighter of pocket, I ambled back to Paddington and A folded up her bike, ready for Hailo.

Oh and sorry about the rubbish pics. Better than nothing. Just. 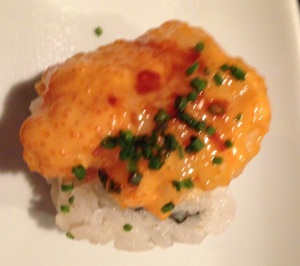 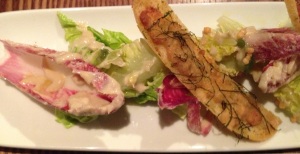