I’d been here in a former life. When this was a great restaurant. When Giorgio Locatelli used to be the chef. When they had a special truffle menu and even the dessert had truffles in it. I remember it well.

I will remember very little of this meal, other than that it was overpriced and underwhelming.

I have read that the loss of the Michelin star here led to the loss of the chef. I don’t know what it was like before, but on this showing, there will be no stars here in the foreseeable future.

Some bread to start: a decent selection but nothing memorable. Apparently they have stopped doing complementary canapés. Meanness, at these prices.

The focaccia was quite nice though and fluffy-fresh. A bit salty. Then burrata and tomatoes. It came with something unidentifiable and jellied, scattered around the tomatoes. I tasted the jelly thing a few times. Insipid. I don’t actually know what it was. Translucent, tasteless jelly. It added precisely nothing to the dish. The tomato selection was fine and the burrata good fresh and creamy. The dish could have done with a bit more of the basil and a bit less of the jelly, in fact none of the jelly and would have been much better for it.

C ordered the minestrone with cereal. A safe choice. Boring even. But it wasn’t what I’d recognise as minestrone, and was more of a creamy saffron vegetable soup. Not what C was expecting either.*Not impressed face* was starting to surface.

And then, for me, turbot Milanese, with a side salad of cucumber and chilly (sic). It came on a slate, not a plate, served diagonally. Breaded fish. Basically a big fat square fish finger. The turbot not firm. Not a great piece of what should be a great fish. The breading coming away from the fish, so gaping spaces left underneath. The tartare sauce lacking any bite at all, not enough capers in it. The fish needing lemon to zuzz it up. Poor.

And the accompanying salad so incredibly salty that I couldn’t eat it. And I’m a veteran salt-adder. So salty was it that I didn’t trust my judgement and thought that my tastebuds had, perhaps, been affected by something else I’d eaten. Or hormones. On which I blame everything these days. So I asked C to check.

One taste of the offending salad and C had cats’ arse mouth. You know what I mean. Puckered. They asked if everything was alright. I said it wasn’t. They took it away and brought more salad. It was exactly the same. The overripe rocket didn’t help either. You know that bitter taste that rocket gets, when it goes past its best? That.

They asked if it was okay. You can’t fault the service here. They were all over it. But I couldn’t lie. And I told them not to worry, as I didn’t want my plate whisked away for a second time. They brought me a bowl of plain salad without dressing and plonked a bottle of olive oil on the table a few minutes later. More overripe rocket.

And C had veal chop, which came on a bed of mash with bobby beans draped over it and fruit mostarda. Adequate, was the description.

And the speed of service? There’s quick and then there’s indecent haste.

And I never thought that I could say this, but it was all too fast, even for me. No chance of a lingering, relaxed meal. The waiting staff were charming, but all over us. Except when it came to the bill.

And then, when asked if we had had a nice meal, I said that it was okay. I used that word. I’d assumed that the salad saltiness situation had been communicated. Nothing was said.

Okay. Not a word which generally indicates to a restaurateur that you’ve had a great meal. Had the woman taking the money actually been listening, she might have clocked that my response was less than ideal. But she wasn’t and we left, £100 poorer for two courses, two bottles of fizzy water and no booze. I could blame Belgravia for the prices but really, that’s no excuse for serving second-rate food at top dollar. This isn’t a poor relation to its former star, Locatelli, it’s not in the same firmament. 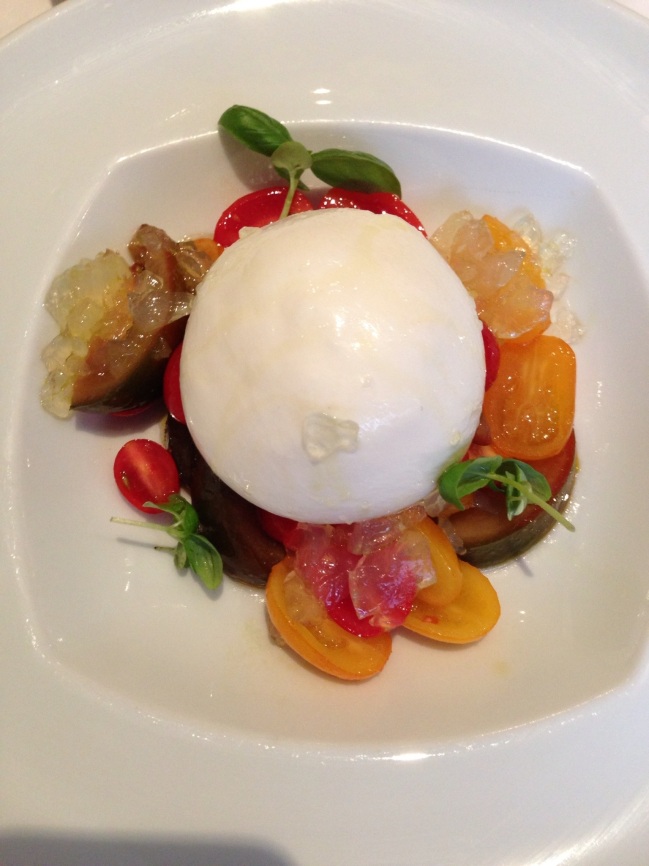 ← I confess : Cocomaya, Vintry, Pizza Pilgrims and Gelupo. I get the Picture. →