I am predisposed to love Theo Randall because of his chocolate cake recipe. I noticed that it was on the menu. Perversely, I didn’t order it.

It was a Friday night and we wanted to avoid rush-hour traffic. You will not be entirely shocked to find out that my Internet browser is set to open at Top Table and I did that aimless scroll through the tables available at pensioner’s choice, 6.15.

After the Zafferano disappointment, I wasn’t particularly keen on going for another overpriced Italian and shocker: Italian isn’t my favourite cuisine. But C wanted it and sometimes I do what he wants. Sometimes. Actually barely ever. Once. Maybe.

And there was an enticing offer of two courses, with a glass of prosecco, for £27. Not that it would make any difference, frankly. I don’t know what it is about me and set menus. Even if I fancy the food on it, I have to choose from the à la carte. If I choose the special offer, I feel like I’m going for cheapskate choice. Which is ridiculous.

So we make yet another wrong decision and get a cab and when we get there, we find out that there is valet parking. Which is useful.

The Intercontinental on Park Lane is not a hotel I frequent very often. It doesn’t welcome you in. It’s a bit too soulless. A bit too glitzy. A bit too dead.

To the right, is the entrance to the restaurant. And the restaurant is a cavernous, windowless, characterless shiny box. I’d forgotten how entirely lacking in atmosphere this room really is. There are plenty of great large underground rooms. This isn’t one of them.

I was going to suggest that the very fact that it’s in an hotel kills it, but then I think of Locanda Locatelli, or Marcus Wareing. Both are examples of successful in-hotel restaurants and both reflect the chef’s personality. Unless Mr Randall is dull and entirely lacking in character, then I suspect that this room doesn’t quite get the man. It does him no favours.

I read somewhere that every Four Seasons hotel, wherever it is, has an Italian restaurant in it. It’s the most popular global cuisine apparently. And despite the promise of the menu, the Italian food on offer here was very hotel-safe. Even the bruschetta was bland. For ‘popular’ here, you might read safe. For ‘popular’ here, you might read dull. And the people who were eating here? I couldn’t possibly comment. And I was one of them. Oh.

Some decent bread, foccacia and aforementioned bruschetta, but nothing out of the ordinary. Easy to leave. Then some complementary zucchini fritti. You can’t go wrong with that. And they were good. Could have done with a little more seasoning, but delicious nonetheless.

Granted it’s difficult to make bresaola sing off the plate, but this was a workmanlike showing. When a dish is simply an assembly of ingredients, the quality of those ingredients needs to be superb. They were not. The meat was lacking in flavour, the Parmesan not sufficiently strong.

And then, pasta Genovese, which came as wide flat pasta, papparedelle, with fresh pesto, green beans and potato. Fresh pesto? I’ve made it myself many times and when I can’t be bothered, I’ve used good stuff, from the jar. This did not taste fresh. Moreover, there was too much of it and the whole thing was an undifferentiated and fairly claggy mush. I wanted spaghetti. If I’d known they were going to do the dish with papparedelle, I wouldn’t have ordered it.

C was happier than I was, with his decent seafood risotto followed by a massive portion of grouse, but not quite as happy as he was the previous evening,  with the grouse at Racine.  Again, here it just wasn’t particularly memorable.

And because he is entirely predictable, C chose tiramisu. I was pretending to myself that I wasn’t having dessert but the waiting staff were having none of it and just brought a spoon for me, unbidden. They were of course correct that I was going to want to get involved, albeit in a limited way, and so I did. But it was easy for me to have just a spoonful,  because again, it wasn’t particularly notable. I wondered whether there was actually any alcohol in it at all. There was none of that boozy hit that I like in a good tiramisu – the sponge nicely soaked in marsala wine. Couldn’t taste it at all. I wondered whether it was an alcohol free-version especially for their hotel guests. Meh.

This was food with the flavour button turned down. Catering for the hotel crowd. Promising much on the menu, but delivering little of real interest. Workmanlike and dull in the age of the modern Italians who do this so much better. Why would you come here when you could go to Locanda, to Murano, to L’Anima or Bocca di Lupo?

When this opened, it got paens of praise from those in the know. And when it opened, there wasn’t that much in the way of competition. And it feels staid and dull in comparison to its competitors. I’ve been three times, twice with clients and once in real life. Until it catches up, I won’t be going back. 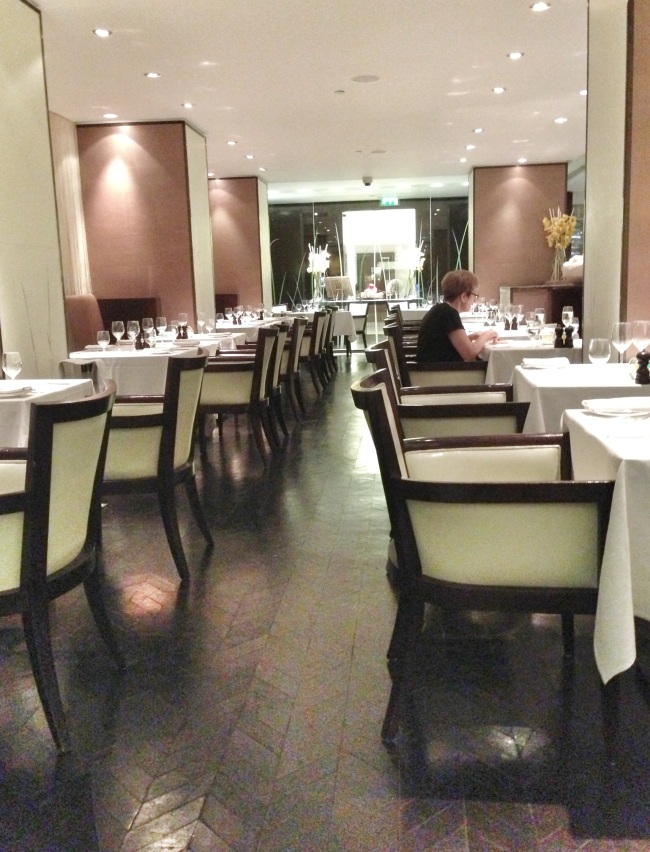 A room without a view 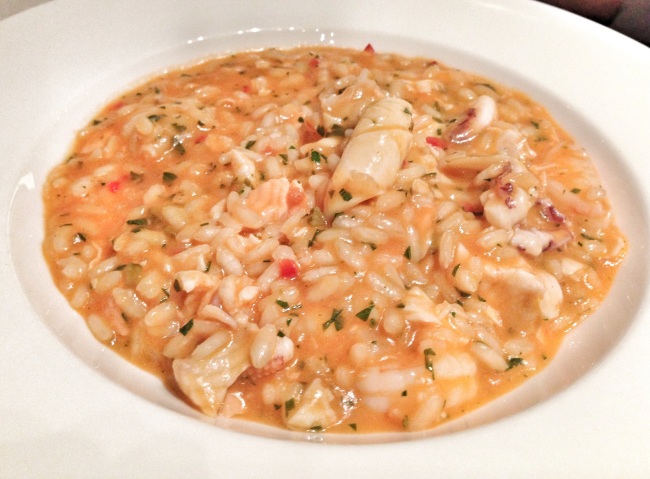 Seafood risotto. Possibly the best dish of the night.

← I get the Picture. Tommi’s Burger Joint. Plain, lovely. →