Medlar. Not an open-ers in sight.

Medlar. Not meddler. Which is sometimes said of me. Unfairly, in my view. And medlar is a fruit which is rotten before it is ripe. Have a look:

Not so difficult to see how that name came about.

My favourite reference to it appears in Chaucer. An old slang name for medlar is open arse. I’m glad I know that.

“This white top writeth myne olds yeris
Myn herte is mowled also as myne heris-
But if I fare as dooth an open-ers
That ilke fruyt is ever lenger the were,
Til it be roten in mullock or in strew
We olde men, I drede, so fare we:
Til we be rotten, kan we nat be ripe.

It’s been hovering around on my list for some considerable time, mostly due to the fact that it’s at the open-arse end of the King’s Road, in Chelsea. Near the Harbour. Too far to take a cheap cab and no decent buses home. Obviously I’m not going to drive there. Not with that wine list.

But now I’ve been, I realise that unlike other places, which have been raved about by others and found wanting, this place justifies the hype. I will be coming back often. Especially since it does a set menu on a Sunday night, when I am most in need of being taken out of myself and least inclined to go on a big blowout.

I’d decided to walk from Sloane Square tube. My Google maps thing said it was a 23 minute walk but that didn’t take into account the twenty or so unscheduled stops in the various furniture stores and shoe shops which line the route. I’m avoiding clothes shops at present. You know why.

It was warm and sunny. This is a summer we can’t complain about. We can’t complain. Everyone says. Before they do. The tube. The not sleeping. The it’s ok if you’re abroad by a pool. You’ll be complaining come October.

And there was a table free at the front. The view isn’t one that you’d travel for, but it is outside, and being British we have to make the most of it.

I had time to study the menu. My first impression was that it was a menu of grown up and complex food. There were two things on it I didn’t recognise. I like that. And each dish had a slightly unexpected ingredient. Sand eels on a dish of Cornish lemon sole. Snails on a dish of under-blade fillet. This is a menu which deserves proper consideration.

And the wine list is sensibly priced as well. Some very reasonable bottles of Mersault jumped out but I went for my old favourite, a very pleasant old-world gewürztraminer at £37.

I was torn between the signature duck tart and the tagliatelle with girolles, fresh broad bean, pecorino and summer truffle, but the broad beans swung it. I’m powerless in the face of fresh broad beans and we’re surely tasting the last of them now. This was a delicate, satisfying dish. Good smattering of truffle and no surcharge. This is a restaurant where you can be greedy, even if the restaurant isn’t.

My companion had the duck egg tart, with red wine sauce, turnip purée lardons and sautéed duck hearts. Seeing little duck hearts on the plate is a bit too real for me but I did manage to try some of the sauce. The egg sat on flaky pastry which sat on a bed of spinach. This is a gutsy, rich and unctuous dish. I may have to put aside my duck-heart squeamishness.

And then the roast cod, with Bayonne ham, piperade, cod champ, verjus crème fraiche and salted almonds. To assist those of you who don’t spend most of your life in restaurants:

1. Piperade = A Basque dish made with peppers tomatoes and onions

2. Cod champ = I don’t know, but I think it was the fishcake in the middle.

3. Verjus = an acidic juice made by crushing unripe grapes or crab-apples

Look at it. Go on. Look at it. I loved it. So much happening on the plate but not an ingredient out of place. Nothing overwhelming anything else. The deep fried parsley, the almonds, the crispy cod. All of it properly cooked, beautifully presented and entirely delicious. I couldn’t fault it.

And I looked with envy at my companion’s Cornish lemon sole, with palourde clams, coco beans, trompette, baby carrots and sand eels.

2. Coco Beans = not to be confused with cocoa beans obviously. Haricot beans, usually used in cassoulet.

3. Trompette = Usually trompettes de la mort – trumpets of the dead. The name derives from a myth about the growing mushrooms being played as trumpets by dead people, under the ground. Nice.

4 Sand eels = Apparently the name for a number of species. Most of them are sea fish of the Hyperoplus – greater sand eels. Now you know.

It wasn’t simple but it was simply delicious.

And the dessert was great too. Blackberry beignet (think deep-fried doughnut) with lemon-curd mascarpone. I loved this. Crispy delicate and creamy sweet/sharp mascarpone to cut through it.

And then, because we obviously needed, we were brought some lovely truffles. I expressed my approval. I was brought four to take home. The charming waitress told me a salutary story about how she’d had them in her bag and they’d melted. That would never happen to me,

Page 1. I felt that you needed to see it in all its glory

Look at the truffles on that.

Duck egg tart with a heart. Or two.

Cod. A party on a plate 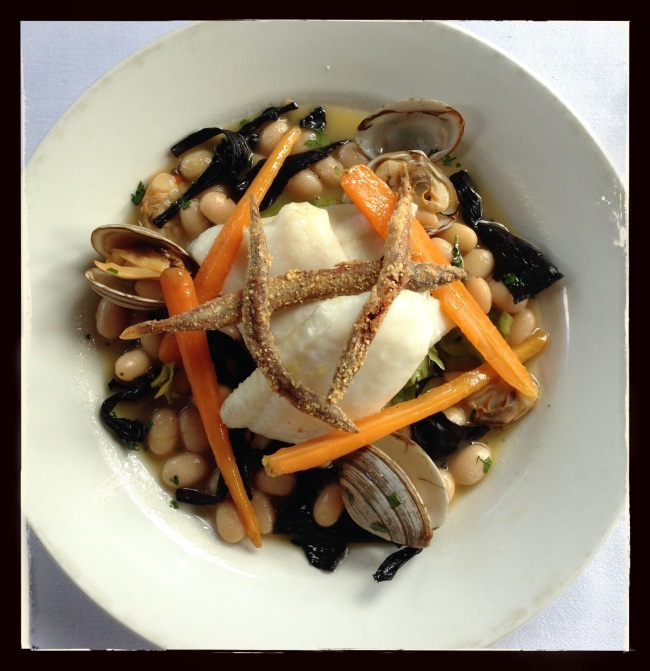 Blackberry beignets and lemon curd mascarpone. I need that recipe. 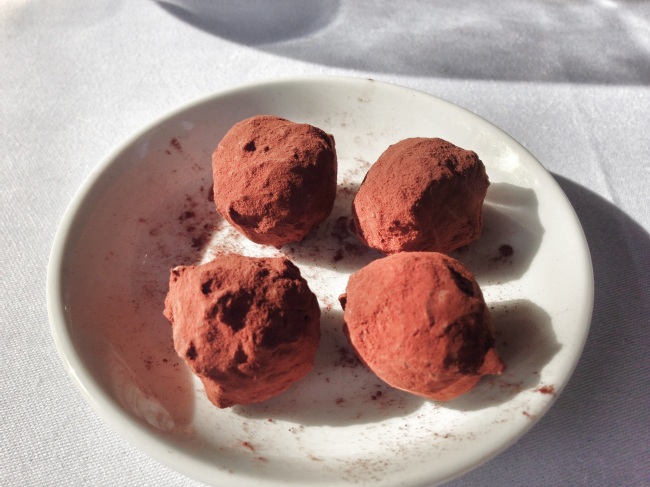 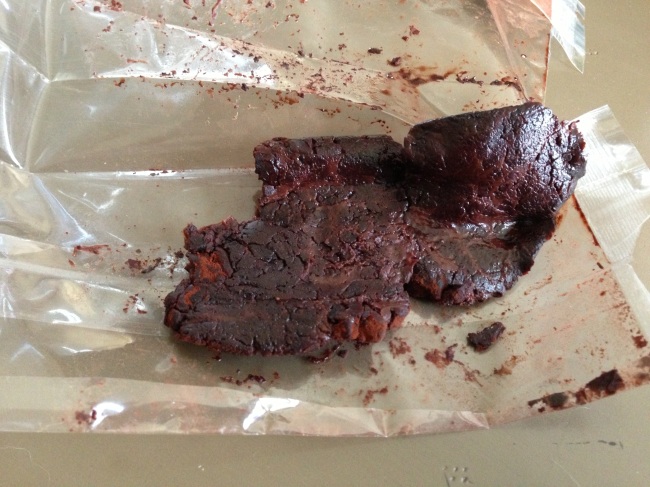 Chocolates in my bag. I still ate them.