Sometimes I am the client. It happens quite rarely in my life as a private practice lawyer. Sometimes I even get taken out to eat by other lawyers. And as I am obviously perceived to be a food fascist, I’m often asked to choose the venue.

And at one level, the control-freak one, I’m clearly ecstatic to be in control of the destination decision, but then I have to consider what the other person might actually like. And the cost. Oh.
A normal person would go somewhere tried and tested, somewhere safe and sensible. A normal person. So I choose to go to somewhere that I’ve never been before, haven’t really heard much about and where they specialise in a style of wine I don’t really like. And even worse, it’s on St Martin’s Lane – home of revolting chains, theatres and too many tourists. Perfect.

The last foodie foodblogger entry about Green Man and French Horn on Urbanspoon (please don’t tell me I have to explain what that is) dates back to February 2013. February. That’s practically prehistoric in the world of fashionable food.

But because I am also practically prehistoric, that is absolutely fine. Sometimes I want to go somewhere that isn’t full of people wanting to be seen at the next new thing. This was the next new thing some time ago and I thought it had had enough time to settle down a bit. It’s an old pub, a small narrow and long one, with a wonderfully welcoming atmosphere, simple semi-industrial décor, plain brick walls and cosy but comfortable seating.

And it’s all about the Loire, from the Ardèche to Saint Nazaire. Seasonal cooking, with wine from that region, matching the food.

Holy Shist. That’s the wine list. Written with a sense of humour, it was informative and unusual. So unusual that unusually, I needed help. And I was recommended to try a “natural” wine. I didn’t know it was a natural wine though, when they recommended it and I might have baulked. For natural wine is made with the very minimum of technical or chemical intervention. And please don’t confuse it with organic or even biodynamic wines (keep up) – they are entirely different. And there is, apparently, a great deal of controversy around it, partly because there’s no certification system. Or maybe it’s just because it doesn’t actually taste very nice.

I’m glad I’ve tried it, though, in that way I’m glad I once tried a high ropes course, to scare the crap out of myself. Which it did. I wouldn’t try either again. Astringent apple juice with alcohol was the verdict. Apologies if I tread on the dreams of natural wine makers everywhere, but unless you’re feeling adventurous, I’d avoid.
But what about the food? Much more successful. A simple and very French menu, from which we chose Radishes, Sea Salt and Butter (£5), Whole Dorset crab with Mayonnaise (12) and something described as Fresh Cheese, Black Pepper and Roscoff Onions (£5). My companion T would have liked a warning about the wholeness of the crab – it was a small table and we had to make a temporary side-table out of a low stool and the wine bucket, for the crab detritus and the bread – the crab itself was only partly dressed, but it was spectacularly fresh.

I just loved the fresh cheese with herbs, resting in a bed of olive oil, with sweet Roscoff onions dotted around the top of it. It came with excellent crusty bread and good very salty butter. This just really worked. The sharpness of the cheese was set off by the sweetness of the onions, the peppery olive oil and the black pepper. I mopped up every last bit. I have no shame.

To follow, T ordered Lemon Sole, with Seaweed Butter (£19). A good slab of very fresh fish , this was swimming in a rich, partly crispy seaweed–flecked butter sauce. Served simply with a slice of lemon, this was a delicious and rich dish.

I don’t know what possessed me to order the Grilled Mackerel, a fish I don’t normally order, with Cucumber, Horseradish and Watercress (£16.75). No matter, because this was excellent. The fish skin was beautifully chargrilled, the cucumbers were pickled and hidden beneath the cucumber/ watercress combination were slivers of new potato, all of which worked perfectly with the horseradish sauce. Every bit of this dish was cooked properly. It wasn’t complicated cooking, but sometimes it’s harder to get simple cooking and simple ingredients to stand out, as they did here.

And then because we both really needed, Fig and Almond Tart, with Crème Fraîche (£6.25), Pear, Salted Butter Caramel and Sable Biscuit (£7.25). I would never have combined poached pear with salted butter caramel. Who knew?
Great service, gutsy food, good atmosphere and a keenly priced three course pre-theatre meal, at £15 deserves special mention.

And schist? It’s a medium grade metamorphic rock with medium to large grains of mica flakes in a preferred orientation. You’re welcome.

Scores on the doors 8/10,
Best for: Relaxed entertaining with friends/clients
Worst for: People who only drink Chardonnay

The crab, the whole crab and nothing but the crab 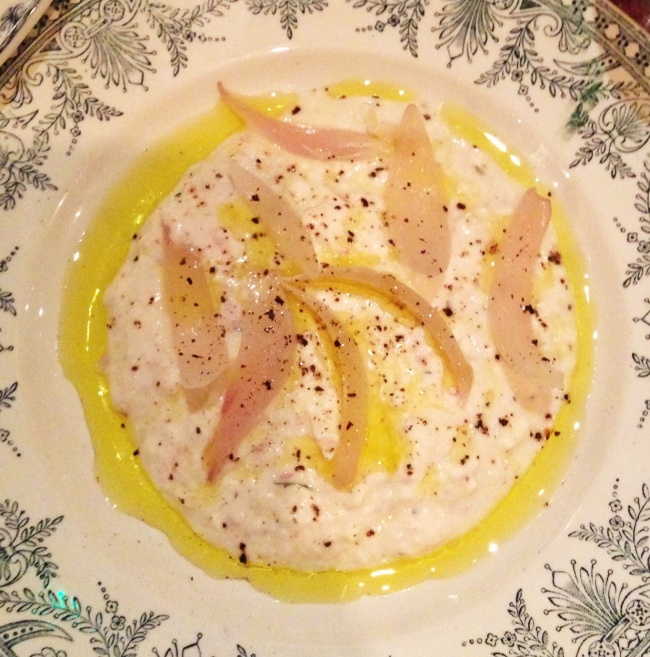 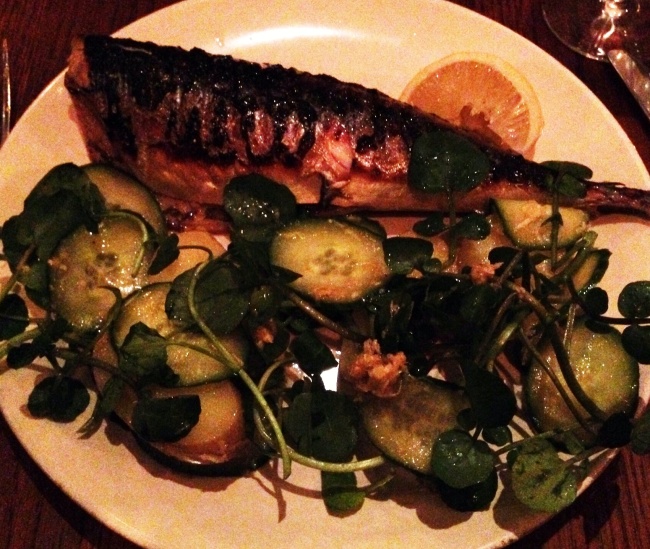 Fig and almond. The creme fraiche was a bit shy

← Hutong at the Shard. Lord, love a duck. Little Social – I can be, sometimes. →