I’d broken my no lunch rule, just before Christmas. A few mouthfuls of delicate and delicious Vitello Tonnato, a client called and I had to leave. For those of you who don’t know – and why would you – my day job is as a lawyer. A property and finance lawyer. And property transactions generally have to complete around lunchtime.

By this point I can feel your incredulity. No lunches? But it’s true. My eating out is generally done at breakfast and dinner. Less stressful that way. Less likely that I’m going to have to check the device every three minutes, or take a call. And less chance of me sending ill-judged, in vino veritas emails to other lawyers when I get back. I might, if sufficiently oiled, unwittingly turn into my old-school old boss. He had a stock response to lawyers chasing him for documents. What do you think I do here all day, son? Eat paper and shit mortgages?

I’m not sure how many laws of political correctness he broke on a daily basis, but I suspect it was well into double figures.

So I’d been feeling robbed and was looking for an opportunity to go back and finish the job. Trusty Toptable to the rescue. It’s very busy and I’ve tried a few times without success. But lo! A 5.45 slot. Secret joy. Pensioner special and I get home well in time for The Bridge. What’s not to like?

I’m sure you’ve made the connection between this and the mothership, Murano, just up the road in Mayfair. This is an Angela Hartnett venture, back to her old stamping ground. Literally. She worked here, alongside Marcus Wareing, when it was Petrus of blessed memory. Bang on trend with its informal dining and the possibility, but not the necessity, of sharing plates, this is a well-priced and very welcome addition to the area. And it’s packed. According to our very friendly waitress, they were expecting 150 covers that evening, the busiest ever. And she was looking forward it.

The room is long, narrow and simply furnished with stylish lighting. there’s a long bar, where I’d be quite happy to dine alone, tables set along the wall and a wider restaurant area at the back. I like the window tables at the front. That’s because I’m anti-social and don’t want to squeeze in next to other diners. And I like to hear the conversation on my own table rather than every one else’s. I know. Fussy.

And the food? A small daily menu. Great wine list, reasonably priced. Some little plates, which we passed on, this time. I still recall the truffle arancini balls from the ruined lunch. Memorable.
And instead of the light, delicate starter that my body was crying out for and which I could so easily have chosen, I went for Osso Bucco, with Risotto Milanese. Osso bucco, for those of you who need to know, means bone with a hole and refers to the cross-cut veal shank which makes up this dish. This was excellent. The risotto was perfectly cooked, the correct bite to the rice, not too much saffron and the meat intensely flavoured and tender. This was the starter portion, but in my life outside restaurants, this was more than enough for a complete meal.

C was not altogether taken with his carbonara. It was a fairly deconstructed version of that dish, with large pieces of guanciale and no cream, ( I am reliably informed that there should be no cream)  and I thought it was nicely done and that he had a closed mind, expecting a dish he knew well and not adapting his brain to the dish actually in front of him.

And then, sticking with the Milanese theme, Chicken Milanese, with a rocket and parmesan salad. A simple and entirely satisfying dish. piping hot, buttery moist and crisp, I loved this. The salad, far from being the usual extraneous bit of limp rocket was dressed with a strong and piquant citrus dressing and had large slices of good quality parmesan, which worked really well with the chicken. It was bigger than it looked. I couldn’t clear the plate.

Although obviously that didn’t stop me from doing a swift and brutal demolition job on the moist, alcohol-drenched Tiramisu, in concert with C. It was over in a matter of seconds. I almost inhaled it. Looking at pictures on the interweb, I think that it has shrunk. That’s probably a blessing.  If it had been the size of the table I would have managed.  Easily.

Breadliness. And peppery olive oil of loveliness, out of view.

Osso bucco. I should have stopped there. 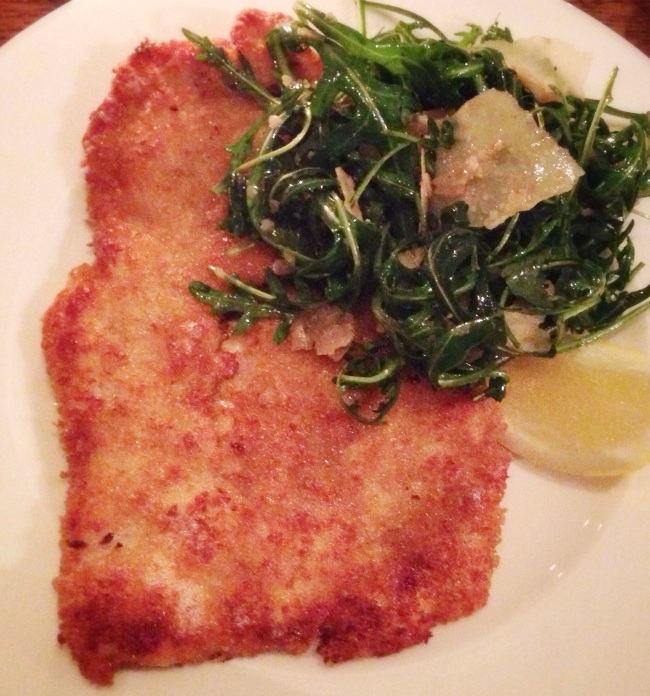 Chicken Milanese. Bigger than it looks. 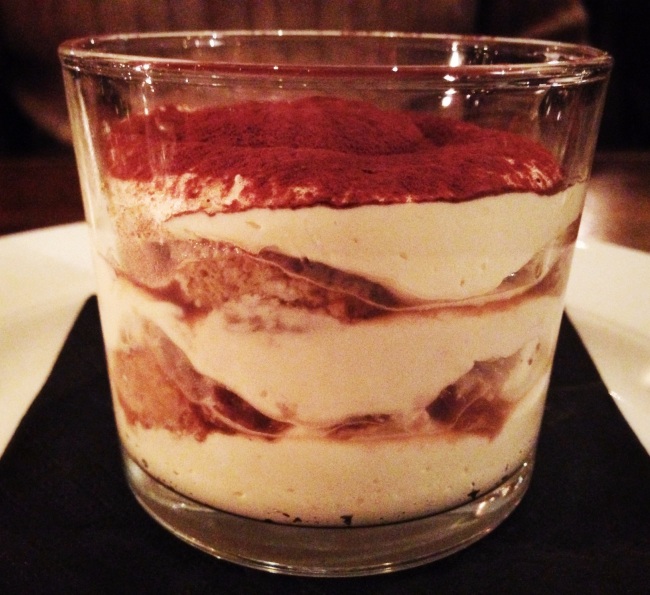 Tiramisu. Predictable can also be delicious.

← Claridges. The Reading Room. Shhh! Per Se. Of itself. →