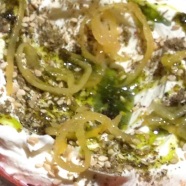 “They tried to kill us, we survived, let’s eat”.

So it says on the menu. I’m not sure how you’d react to that sentence, if you’re not Jewish. Jews recognise it as a typical example of blacker-than-black Jewish humour.  There is nothing that Jews won’t laugh at. Jews other than C, that is, who wasn’t at all sure. But he’s Canadian so maybe it doesn’t count.

I feel that non-Jews might worry about its appropriateness. Especially in a Jewish cultural centre, which is where Zest JW3 is situated. And notwithstanding the quite spectacular press coverage that it has received, its location will mean that it attracts a mainly Jewish or local clientele, which may or may not mean the same thing. And it would be a shame if it doesn’t get a wider audience than those in the “community” because it’s better than average and let’s face it, Finchley Road isn’t packed with great restaurants.

And it’s Israeli food,  in the main, with influences from places where Jews have settled, so there is a lot of Middle Eastern spicing, liberal use of  ingredients such as tahini and harissa,  and then some Ashkenazi, Mittel-European influences, like cheesecake.   The format is flexible. You could have mezze and nothing else or go for the conventional two/three course meal. The mezze are more modish than your average places along the Edgware Road.  More Ottolenghi than Maroush. Traditional dishes such as labneh (yoghurt) come with za’atar, sesame and spiced lemon and  the delicious and creamy hummus comes with tomato and cardamom salsa and soft-boiled egg. And there’s great bread – chollah, pitta and wholemeal, when we came.

I’ve had the whole stuffed sea bass (mejadra stuffing – lentils) currants, lemon yoghurt, pan-burst cherry tomatoes and flaked almonds. Perfectly cooked, this was full of flavour and a meal itself. No side dishes required. On the next visit, the blackened aubergine,  Iraqi tabit (as far as I can work out this means a slow-cooked meal), strained yoghurt and mixed herb salad. A whacking great aubergine,  stuffed with lentils and yogurt and topped with fresh flat leaf parsley and coriander.   Simple yet satisfying, lovely smoky flavour counterbalanced by the sharpness of the yoghurt and herbs and made more  filling by the addition of the lentils. Enough for two to share, with other dishes.

And the desserts are also comforting. We thought about the rosewater malabi,  a sort of Middle-Eastern blancmange, with a rhubarb and blood-orange braise and pistachio praline but in the end went for the safe-sounding chocolate torte.  It was large, intense, rich and creamy. I was expecting a delicate slice.  No. This was the size of a large camembaert and with more calories. The sort of texture which needs a spoon and a fork to get through it and none the worse for that.

And there is wine. But unless you’ve spent some time in the kosher wine shops of north London, I expect that you won’t recognise them. Kosher wine is not well known. Unless you had to, you wouldn’t.

Really, I’m not the sort of person who would  rush to eat at a Jewish Cultural Centre. In fact I’d normally run a mile. Not only would I not want to see anyone I know, (Jews are particularly good at that looking you up and down thing to see if they know you)  I just wouldn’t be expecting to find food of this quality. But I was pleasantly surprised, not to mention impressed at the centre itself and the many and varied courses and entertainments on offer there. I might even be a regular visitor even if (heaven forbid) I might meet someone I know.

n.b. The photos here were from my first visit – not all of them my food. One day I will add the aubergine. I expect you won’t have to wait very long.

There’s a fish under all that lot

Fish burger. But so much more than that.