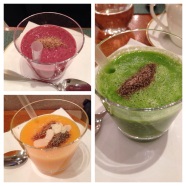 The Fountain at Fortnum & Mason.

The first time I went to Fortnum’s it was the 1970s. It was a school trip to London, to an exhibition at the Royal Academy. I was 13. There was a massive queue. I was impatient, even then. My very sophisticated schoolmate Jacques, all of two years older than me, suggested that we bunk off and go across the road to Fortnum’s and specifically to the Fountain, for an ice-cream sundae.  It took me about one second to weigh up  the relative merits of standing in a queue or eating in a grown-up restaurant.

This was my very first trip to London and going into Fortnum & Masons was, for me, the height of sophistication and glamour. So we sat at the bar, no-one called the police and I demolished a Knickerbocker Glory and many cups of hot chocolate.  I was put in detention for that little foray, but it was worth it.

So I’ve always had a bit of a soft spot for The Fountain Restaurant and I find myself here quite regularly, for client breakfasts. And the reason I choose The Fountain Restaurant is that even though it is not trendy or ground-breaking in any way, it opens early (7a.m.), is consistent, the seating is widely spaced (ask for a booth), it caters for business people and there is a wide and interesting breakfast menu. And if you are on your own, they will bring you a paper to read. And you will be able to read it because the room is rather bright. A bit too bright for my liking. Maybe it’s for all the old people who tend to populate this later in the day.

That is not to say that the Fountain Restaurant is completely old-fashioned – today I had a delicious Antioxidant Smoothie (£6), consisting of mango, papaya, orange, lemon, ginger, flax seeds, almonds and chia seeds. Chia seeds? Rich in omega-3 fatty acids and something I’d expect to find in Wholefoods not Fortnum’s.   And they have a “Refreshingly Healthy” section which obviously I ignore and which is both gluten and dairy free – today there was Clafouti, consisting of quinoa flakes, Goji berries, blueberries, apple, pecan nuts, hazelnuts, cinnamon, coconut and honey. This was described as “healing, replenishing, invigorating, waist-friendly, mood balancing”. That sounds rather ambitious for what is normally a traditional baked French dessert of fruit.  Someone has clearly been looking at their menu and attempting to modernise. No bad thing.

But of course I wasn’t there for a health kick and I was particularly attracted to the Boiled Eggs & Soldiers (£7) especially as they are blue and remind me of the ones laid by my own chickens. I will leave you to digest that sentence. And because I was with an Israeli who had never experienced the joy that is a well-toasted crumpet, or indeed a toasted teacake we ordered the “breakfast bites” which was a basket containing a toasted teacake, a crumpet and a muffin – not an American muffin but a proper English toasted muffin of the sort we used to have before that word was hijacked.

And not only that but thoughtful: overhearing that it was the birthday of my colleague, they brought a box of chocolates with a little candle at the end. We all sang happy birthday. Even the maitre d’. My colleague was less than amused.

The attention to detail is notable; teaspoons with a nice long handle, for the boiled eggs. Extra toast in a basket for when you (inevitably) run out of the toast that they bring you and good jams for the extra toast. And the coffee is good too, although until they get their new machine you may find that there is some delay in obtaining your coffee, as there is one coffee machine, which is in the pastry section of the kitchen (which appears to be some way away) and serves the whole restaurant. The excellent maître d’ was at pains to tell us that in her 26 years of hospitality she has never quite experienced the single coffee machine scenario and that this was being remedied in a matter of weeks.

Clearly, no review of a breakfast menu can pass without a look at the Full English. Not the cheapest I have ever come across,  at £22 but it does include your two eggs (any style), two Sausages, one “house,” one “guest”, Back and Streaky Bacon, White and Black Pudding, Grilled Tomato and Field Mushrooms and a choice of juice and tea or coffee. And all the ingredients are nicely sourced. The White Pudding is described as Ramsey’s of Carluke, Scotland Mealie Pudding called “Jimmies” by the Aberdonians.

They put a lot of store by their ingredients, as you’d expect from Fortnum & Mason and the service is smooth and grown-up, for when you need to be.

But I notice that they have an ice-cream parlour, and they’re still doing Knickerbocker Glories and hot chocolate, albeit a double shot of molten Amadei  with a jug of hot Amadei chocolate milk and sugar stick.

All I need is my friend Jacques and we’re set.

Best for: Breakfast for grown-ups, somewhere to take your parents

Worst for: Post-hangover recovery. The lights will show up your bags.

Three smoothies. The winds of change…

Brighter than the sun

We sang. She cringed.