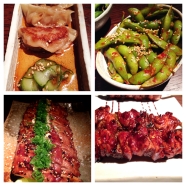 Lipstick Rose, by Frederic Malle, is one of my very favourite perfumes.  You don’t have to be a genius to work out what it might smell like. Traces of grandma’s handbag, rose and violet creams and a rush of memory. So when I saw a cocktail of that name here, I was bound to order it. It was, I’m afraid, medicinal and slightly odd;  the only really duff note of the evening, leaving aside the service charge issue, of which more later.

I was pleased to see that the bloody awful mistake that was Banca, the previous occupant of this premises, was shut down fairly quickly by its owners. It was joyless, clinical and misconceived. An overpriced pizza too far, even for Mayfair.

I’ve been watching the building works, hoping for something I might actually like, or at least not hate. And given the radical transformation, I would never have known I was walking into the same premises, so very different is the feel. All dark wood, moody lighting and buzzy atmosphere, despite only having been open for a week or so, this is much more the ticket. It’s a great fit-out.  And given the dearth of smart yet lively places to eat in the vicinity,  I predict a long life. I’m now calling the area NoMa. You heard it here first.

As you walk in, conventional tables are dotted around a huge central area, which is surrounded by a large and beautiful carved piece of wood, where you can sit, eat and watch the chefs in the centre, preparing the food. It would be quite easy to eat on your own here, which I like.

And the speciality here is the robatayaki cuisine, which is translated as “fireside cooking”. You and I would describe it as barbecued food. It reminded me of Nobu, not a restaurant I love, with a bit of the silly shouty thing going on between the chefs and it is Japanese food aimed at people who don’t really want the austere sort of experience you might get at the more traditional Japanese restaurants.   There’s plenty here for people who think they don’t like Japanese food or who would be worried about eating raw fish.

I was out with my colleague J and a potential recruit. Knowing my control-freak proclivities, J suggested that I order. Obviously, I was thrilled with this suggestion, although slightly daunted, as I had no idea what the potential recruit might like. I felt that the best policy was to slightly over-order, as too much food can never really be a mistake.

Obviously we hoovered up two types of Edamame – spicy and salted. The spicy ones were exceptionally good. Following that we had the Nigiri selection (raw fish on rice), Beef Ginger and Sesame Gyoza, which were delicious, Beef Tataki, , which was lightly seared beef, in a spicy sauce, wrapped round cucumber, topped with something crispy which I couldn’t identify and shaved with truffle, in soy sauce. All good.

Following that, Crispy Prawn Maki, which were sushi rolls, with the rice on the outside. Again, delicious. And then particularly wonderful were the Baby Back Ribs, glazed with Spiced Master Stock and Cashew Nuts. I have no idea what Master Stock is, but the dish was superb. Topped with black and white sesame seeds and chopped spring onion, with lime juice squeezed over, I am already planning my next visit, to try them again. Enough for two people to share, if needs must.

I also liked the Aubergine with Ginger and Mirin, done on the robata, as were the Chicken Yakitori, which divided opinions, as the spring onions skewered between each piece of chicken were not to everyone’s taste. Also notable was the Salmon Teriyaki, the salmon skin delicately crisped and the salmon itself soft and translucent, if you like that sort of thing, which I very much do.

And normally, desserts in Japanese restaurants can be a bit of an afterthought. Not here and especially not the Banana Ice Cream Puffs, little choux buns, filled with banana ice cream and with a caramel dip, this was not an entirely traditional Japanese dessert, but one which disappeared from the plate extremely quickly.

One thing they need to sort out is the fact that they have the optional “Add Gratuity?” pop up when you pay by card, which most people do. And  an”optional” service charge of 13.50%  (!) is already added to the bill, which irritates me and to have this option come up on the credit card machine, which some people will mistakenly take to mean that service has not been added is, in my view unacceptable and should be changed straight away. It’s that old open credit card slip trick.   I’m hoping that’s teething trouble and not policy. It will be disappointing to have to complain about it every time I go.

Spicy edamame. I could eat a lot of these. I did. 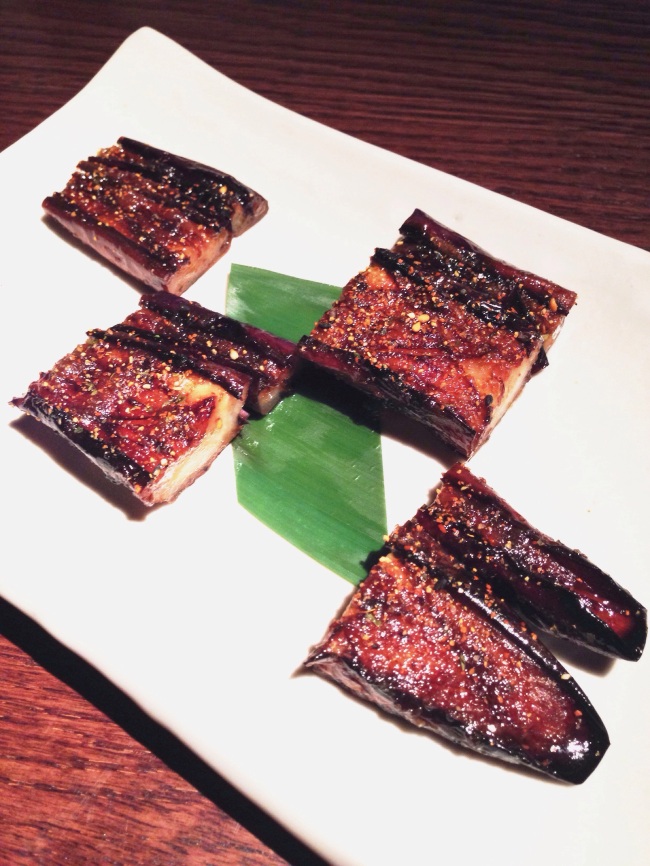 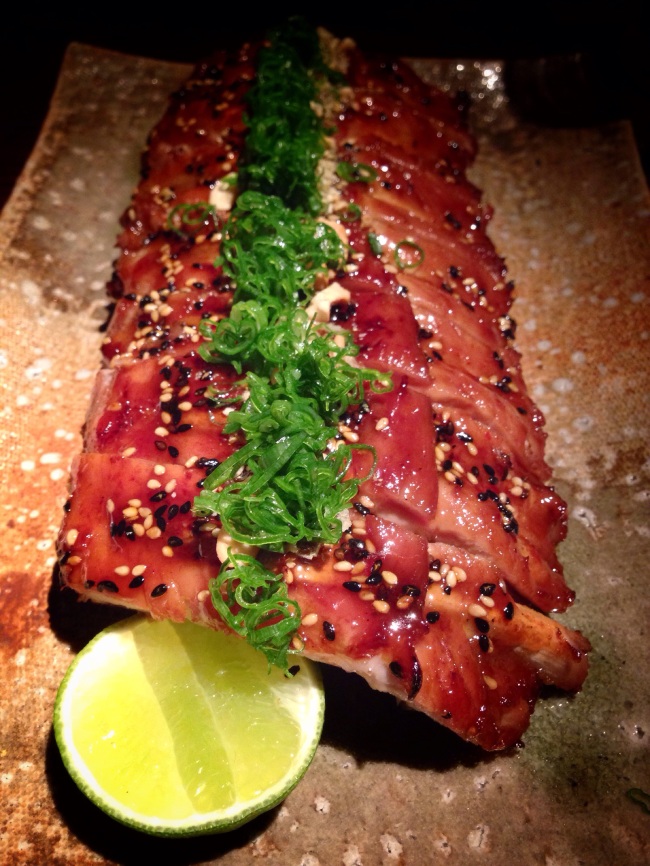 Ribs. I can’t feel mine anymore.