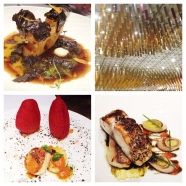 I’d really not fancied going to Ametsa. It wasn’t only the name that put me off. The negative reviews didn’t help. Ametsa with Arzak Instruction? What does that even mean? I’d heard of Arzak, the restaurant in San Sebastian. It’s on my bucket list. A look at the Arzak website shows Arzak has a separate arm, called Arzak Instruction, which offers consultancy services to food operators. So this is the reason for the unusual name. It’s very literal. And a bit of a mouthful.

The restaurant is in the Halkin Hotel, yet another one of those London places that I can’t believe I haven’t been to before. I was dining with legendary PR guru I.P., who was game for a bit of food experimentation. The table was booked for 7pm and we were both early. We were shown to the bar and sat there happily chatting for forty-five minutes, until I was forced to ask the waiter whether we could actually have a menu or indeed be shown into the restaurant. Nothing was served with the drinks.

And so we go into the restaurant, which is all silver and white tablecloths and bright light and the most extraordinary ceiling I have ever seen. Test tubes of all different lengths, filled with what I am given to understand are various spices but could easily be something else. Something less savoury.

I looked at the tasting menu, but at £105, decided that it was a little ambitious for a Wednesday evening in early March.

I was, I confess, a little worried that the portions might be on the small side so we went for three starters. Because we really needed.

But before that, some excellent bread, with good olive oil and a few little extras including  their signature Kataifi, with Scorpion Fish Cake – a pungent fishcake, covered in that thin pastry you sometimes find on certain types of baklava but which looks like Shredded Wheat. Delicious. The other extras? Not particularly memorable.

The proper starters were much better. We had a long conversation with the very helpful head waiter about the truffled potato. I wanted to know what it was. He said that you had to really like truffles to order it and I wondered why you would order a dish called truffled potato if you didn’t actually like truffles. It was rich, intense, very truffle-y and had a sharpness to it which tasted to me like sherry vinegar. I thought the sharpness was good and counteracted the richness of the rest of the dish. . I am afraid that I mopped the plate clean with my bread.

The lobster with White Olive Oil was also delicious. Plump pieces of roast lobster set amongst what looked like snow, but tasted like mild olive oil. I have no idea how they made this but it was interesting and it worked. The Scallops and Spider Crab with the Cassava “soufflé” was good in parts. The scallops were delicious but the spider crab was dark meat chopped beneath a bizarre lid of red edible paper. It looked amazing and dramatic but the crab was slightly dry and bland in the red paper thing tasted of nothing in particular. It wasn’t a “soufflé” and the inverted commas were there for a reason.

More successful was my main course of Sea Bass with Leek’s Ash. It was a fairly conventional looking piece of sea bass, perfectly cooked, with three pieces of leek to the side and a sauce made of the ash of a cooked leek. As you do. It didn’t taste particularly ashy but I liked this dish. The flavours were clean and balanced. Sadly the side dish of Potato Tagliatelle with Trompettes Du Mort was only lukewarm when it got to the table and stone cold by the time I got to eat it. IP wasn’t entirely enthusiastic about his Cod with Horn of Plenty “Pil Pil” and Seaweed – he didn’t quite like the sauce it came with. I did have a mouthful and quite liked it, but then I have a very soft spot for morels.

Obviously we had to have a dessert, but because I had managed to make quite a large dent in their bread basket, I was only in the market for sharing and we settled on the Smoked Chocolate, with Tonka Bean Ice Cream. This was a small chocolate mousse and I could taste no discernible hint of smoking and on top were “fried milk” squiggles of what looked like set custard, but which tasted of very little. It came with a Pedro Ximenez sauce which didn’t pull the whole thing together. I wouldn’t order it again.

And to finish, some petit fours, including a parsley macaroon, which tasted better than it sounds.

Thing is though, I did enjoy it, notwithstanding its inconsistencies. Some dishes were really good, some just odd. But it’s a style of cooking that’s unique – high-end Basque cuisine – and I quite like its uncompromising oddness. It’s not for everyone. Indeed it’s not for you unless you have a yen for the quirky. Which I do. 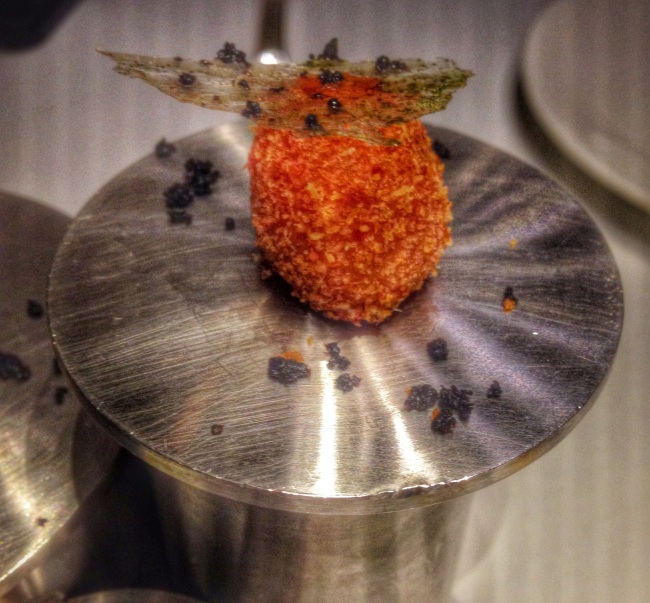 Something with Serrano ham 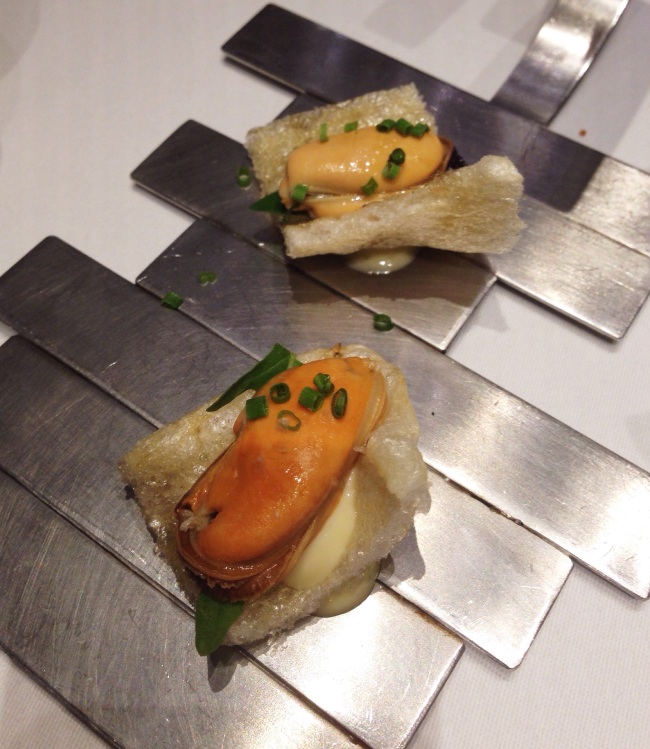 Something delicious wrapped round something fishy and delicious 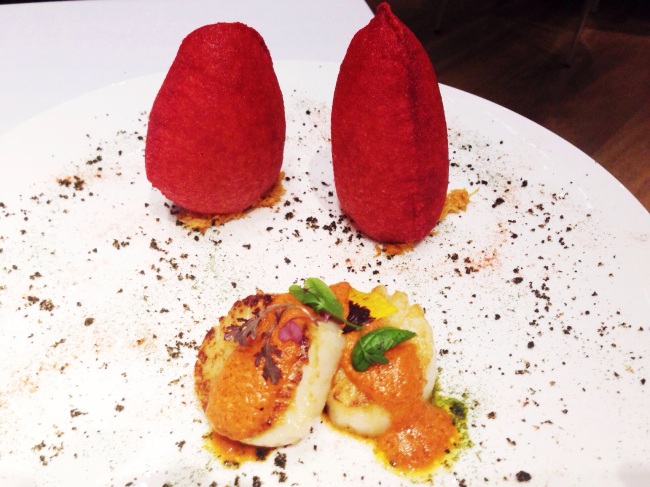 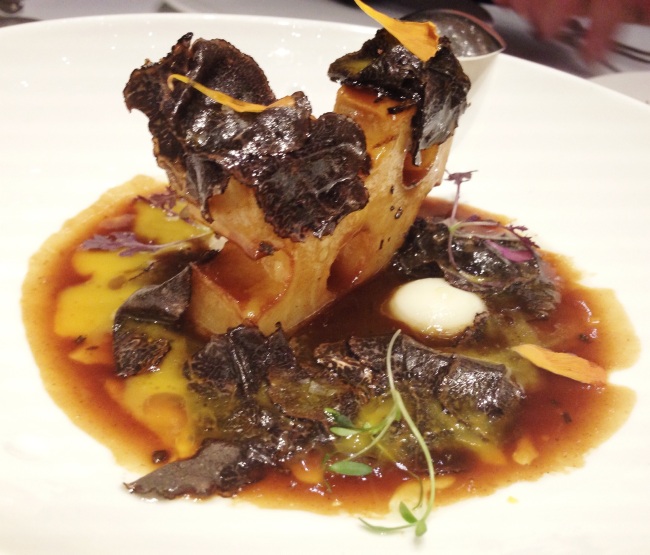 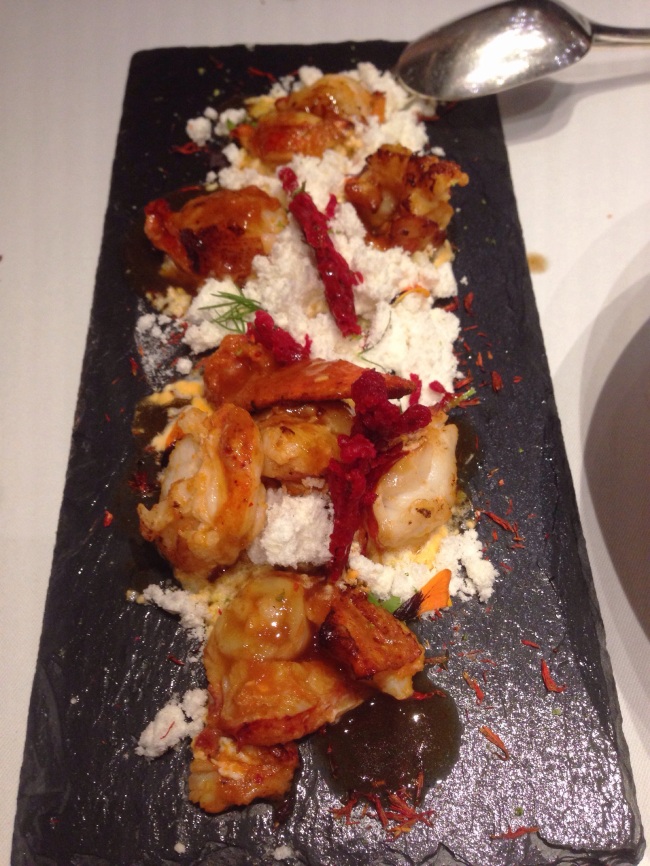 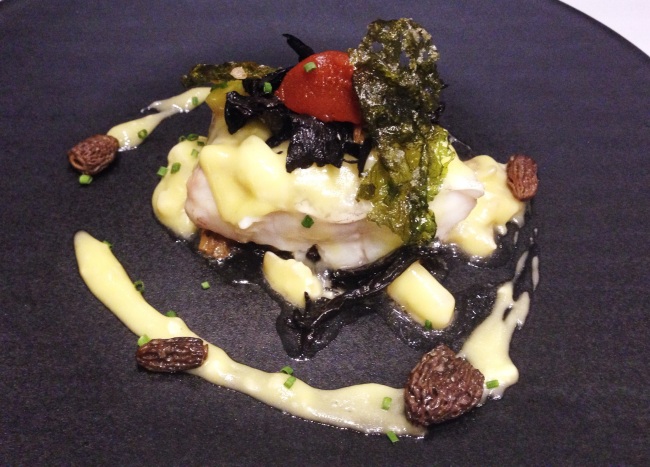 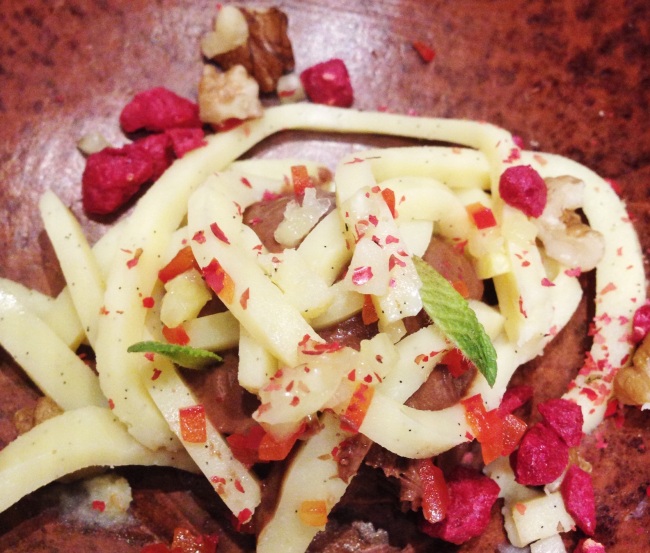 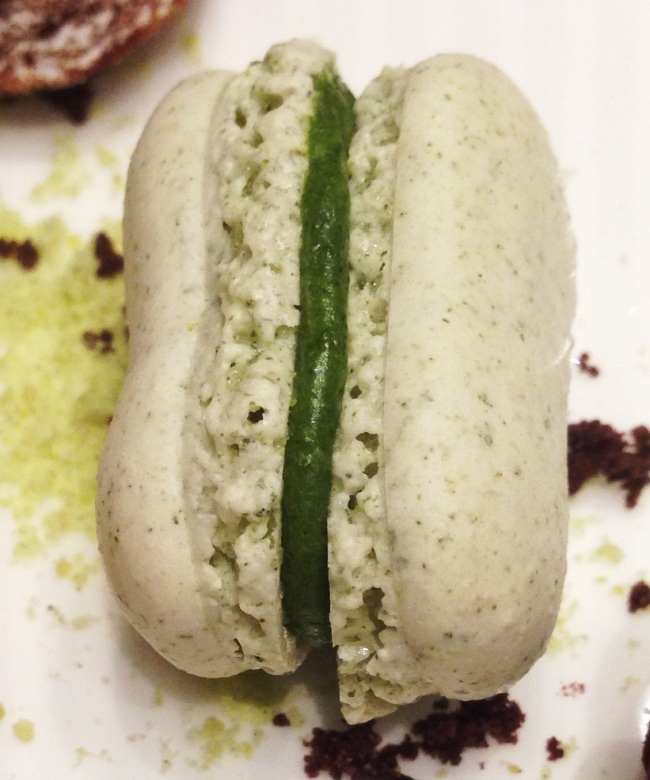