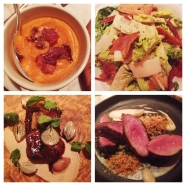 I was worried that a property developer would snap this up and turn it into yet another residential development. I’d been eyeing this place up for years, hoping that it would be sold to somebody who would recognise its gorgeousness and do something interesting with it.

I like a bit of Gothic in a property and this is a fine example. And whilst the owner of this beauty is a residential developer he is also an hotelier and it is as an hotel and restaurant that this property is being brought back to life.

I have been banging on to anyone who wishes to listen that, in my humble opinion, the New York mid-range food scene is slightly ahead of the London offering.  It pains me to say that, but I can’t lie. Partly it’s about value for money, but partly it’s to do with an adventurousness with ingredients and mostly it’s to do with fantastic service. But if you aren’t going to New York any time soon and want to have that New York experience, come here instead, because this is the closest thing I’ve seen in London to it.

You walk through the large wooden doors to what was the outdoor area of the fire station, but is now a stunningly pretty courtyard. I suspect that you will need to be extremely important or glamorous to be able to get a table here in summer.

Greeted by a uniformed doorman, it’s service all the way. Once you have gone through the garden of Eden, a pleasant, smiley gentleman opens the door into the restaurant; an impossibly glamorous girl takes your coat and then you go to the greeting lectern, and another immaculate member of staff takes you to the table. So far, I’ve had to smile and say hello to four people before I managed to sit at my table. The staff/customer ratio is extremely high.

On our way to our table, we walk past a happening bar, full of glamorous young women and their somewhat older male companions,   who have been told that this is the place. For once, I think they are right.

I faff about at our table because I can’t decide which seating arrangement will hurt my back least (ruptured disc – not the chairs) and the maître d’ gets bored and walks off. We had clearly spent longer than our allotted walk-to-the-table time.

And we were lucky with our end table, as we had plenty of room. Tip: ask not to be seated on the back wall, in a run of tables so close together that you have no choice but to listen to your neighbours’ conversations. Don’t get me wrong, I like a good eavesdrop, but I also like a choice in the matter.

But for all my griping, I immediately knew that we were in capable hands. It’s fun and funky and I loved the decor (ceiling envy), the music didn’t get in the way and the serving staff were willing,  if a little inexperienced.

There’s a baby drinks and bar snacks menu on the table that I didn’t notice until too late i.e. after I had ordered. Next time I might try the crab doughnuts. The dinner menu is simple and inviting. Given that the chef is the much-lauded Nuno Mendes, formerly of the rather experimental hipster hangout that was Viajante, one does expect the unexpected. But this isn’t a menu which will scare off the well-heeled denizens of the West End.

Both C and I ordered the crisp chicken skin Caesar salad. Little Gem lettuce hearts, good dressing, delicious crisp skin. Inexplicably C left some of his. I don’t know how that works. At the bottom of the dish was what I believe to be some slightly unnecessary avocado cream. Not a portion which will ruin your appetite, by the way.

And then C had the Iberico Pork Chop and I had the oh-so-of-the-moment shortrib. It came on a wooden plate, on a bed of hazelnut smear, with you-guessed-it kale and some tiny onions. It was a great piece of meat. Slow-cooked, soft, deeply flavoured. Love. On the side, candied sweet potato with bacon, which was cloyingly sweet, the only duff note.

C, went very quiet as he tasted his pork. Even more so than usual. I thought something was wrong but no. It was admiration. The best he’d tasted he said. I tried it. Joy. Order it.  Trust me.

Our dessert hopes had been raised by the mains. I would normally have given it a miss (okay, I might have given it a miss) had the mains not been so interesting. Unfortunately, the desserts lacked the simplicity and punch of the mains. The citrus tart I ordered was a rectangular slab, with shaved lemon ice on the side. C ordered rhubarb sundae. He didn’t like it so we swapped. I liked the rhubarb better otherwise I might have refused. Rhubarb poached and grilled with some jelly-like texture in the cream/ice cream – oh, I don’t know, it was a rhubarb and ice cream sundae and if was perfectly fine but I don’t want the recipe, if you get my drift.

I haven’t enjoyed a new place in London so much for quite some time. Not perfect, but a confident, sophisticated mid-priced new player on the London scene. There is a reason it is hard to get into and that’s not because it’s small. I’ve already got three reservations in the diary. 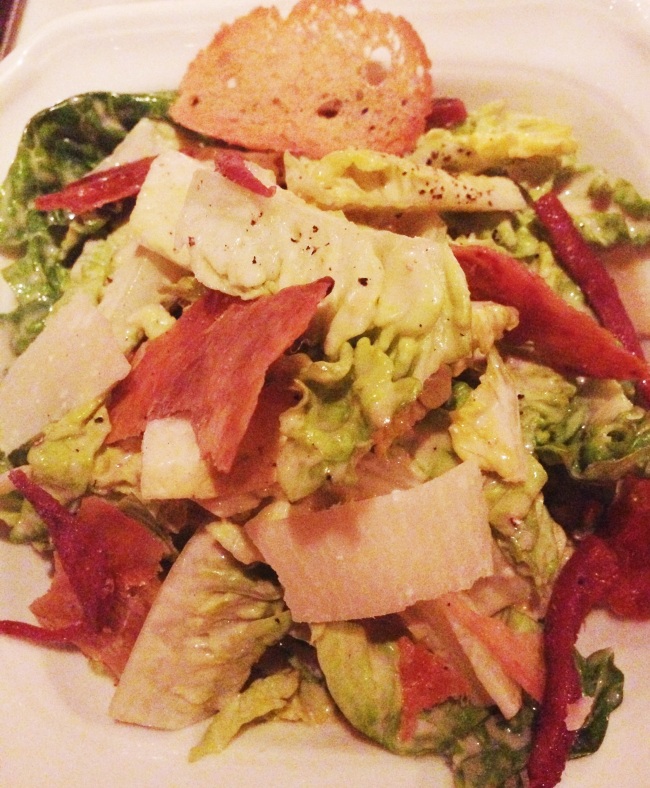 Caesar salad, but not quite as you know it 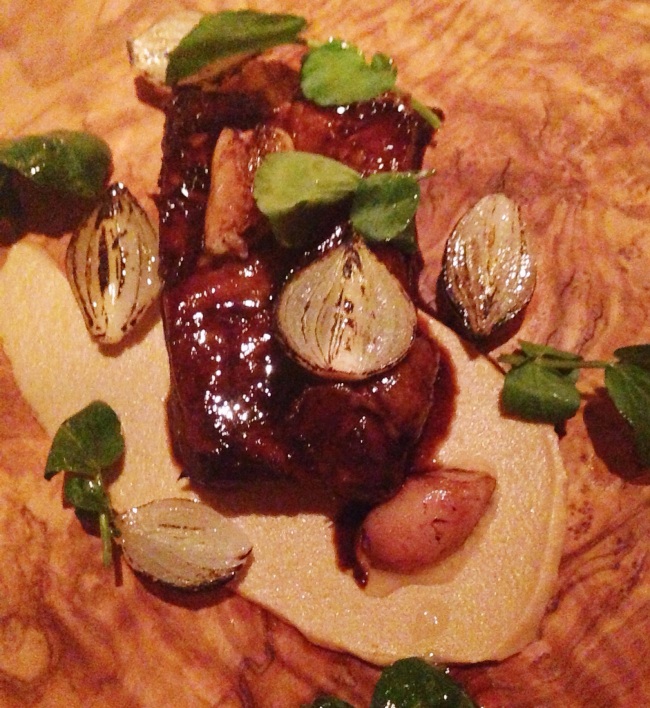 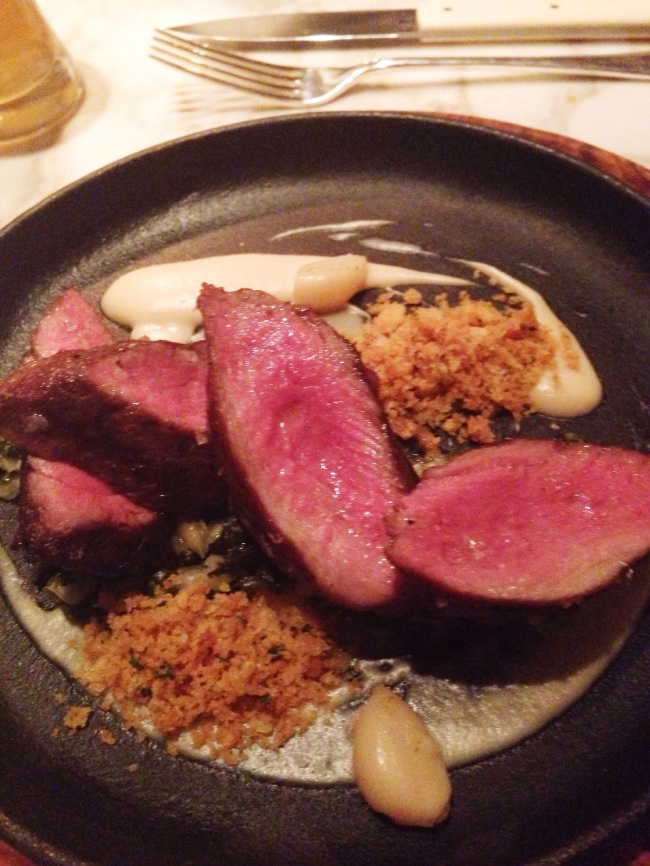 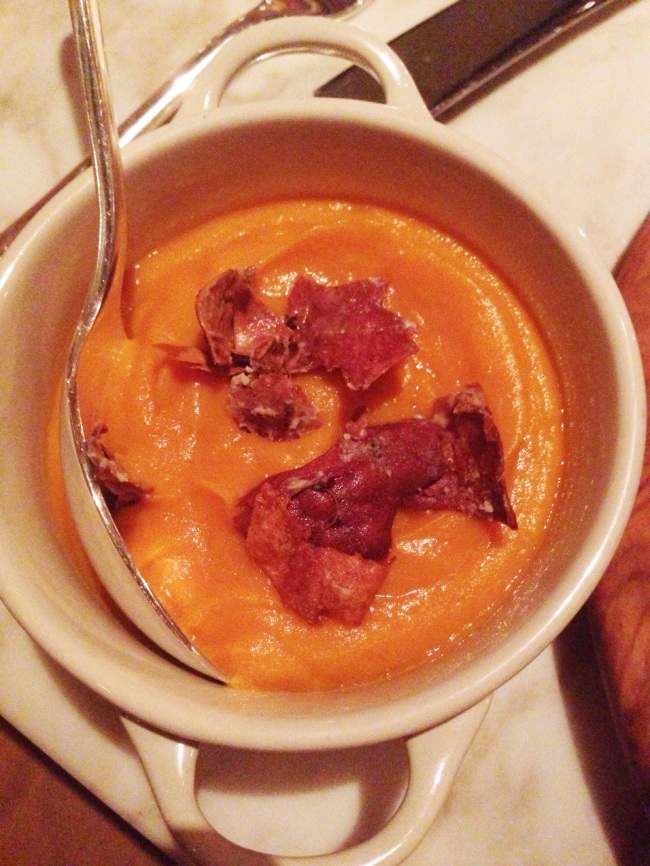 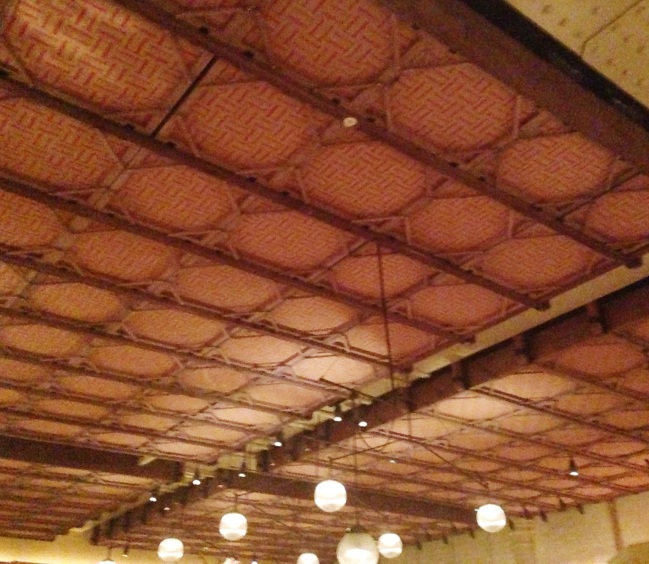 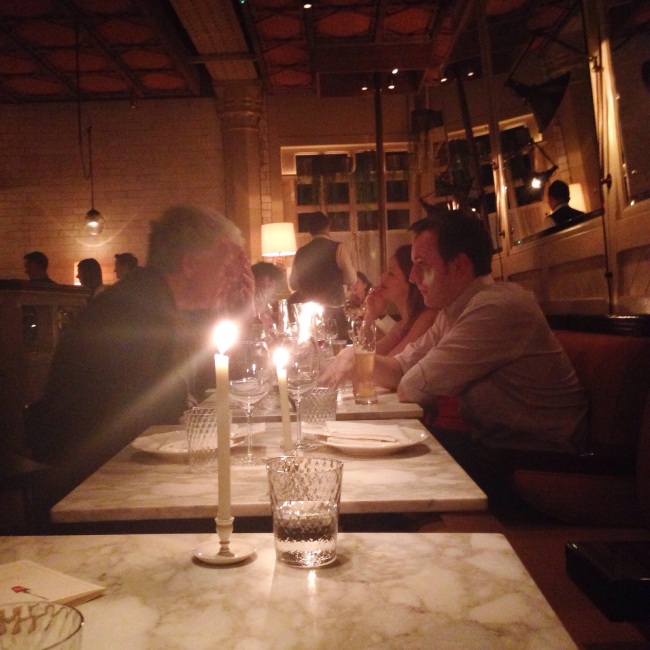 Love thy neighbour – you have no choice 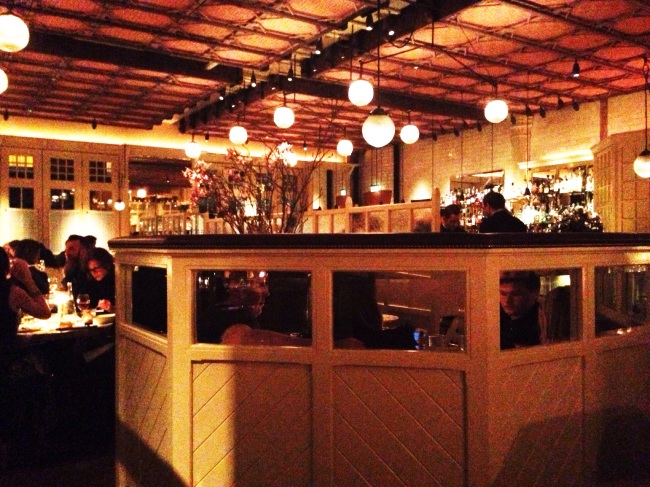 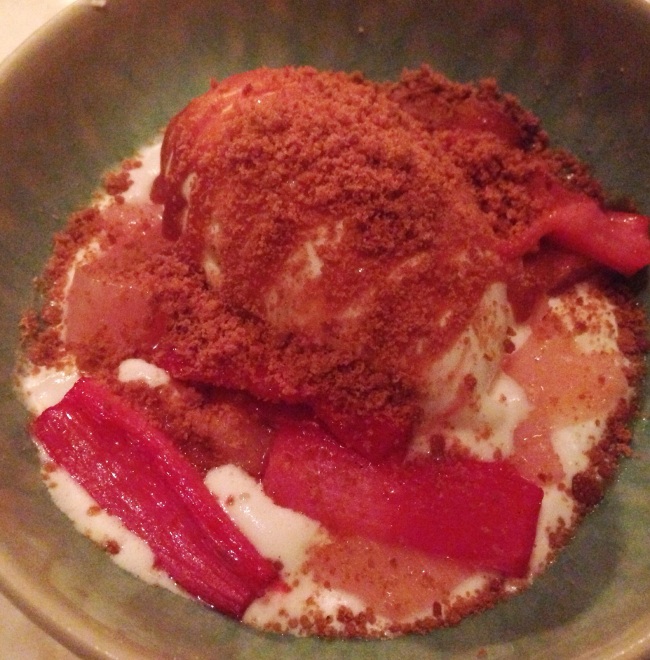 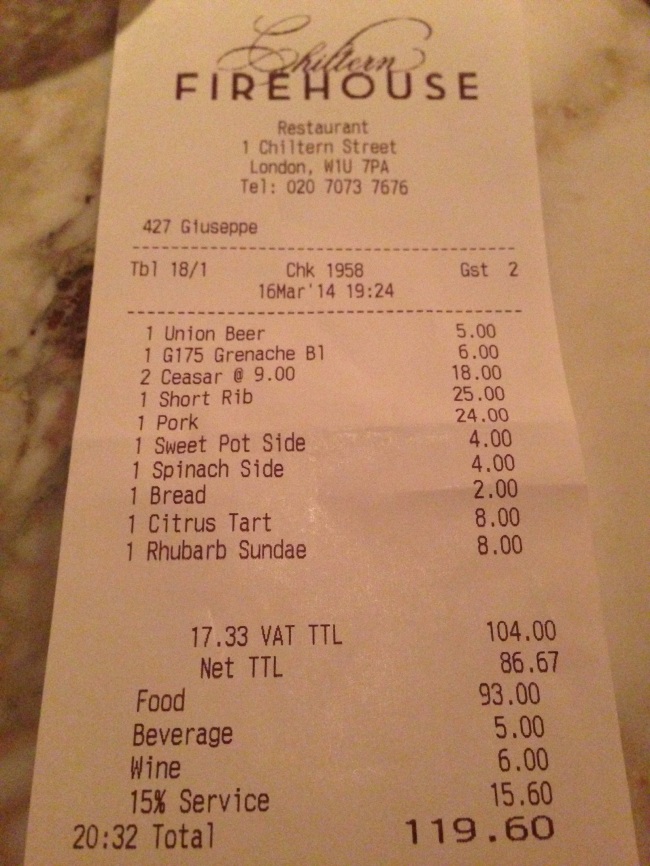 ← I’m a food blogger not a food blagger (or why there’s no such thing as a free lunch). Bocca di Lupo. We wolfed it down. →