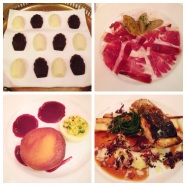 They had me at the Kir. Regular readers will know that Kir is my aperitif of choice. On the menu, Kirs Royale, Vin blanc, Impériale and Pêche. With these Kirs you are spoiling me.

I would never have tried this, had I not read the glowing reviews. And as I walked through the nondescript door, I was transported straight back to rural France,to one of my many get in the car and see where we end up holidays, and of those local restaurants you come across by pure chance, serving well-cooked classic dishes for thrumpence. Not that you’ll be paying thrumpence here, mind.

The décor may best be described as eclectic. Ornate and chintzy, with red velvet banquettes, lots of dark wood and cushions in Warhol’s Marilyn, bang on trend this is not. Over-bright lighting and bizarre figurines on every table are also less than welcome. But it doesn’t matter; just accept that you’re having an old-fashioned dining experience and let yourself go.

Only a couple of years old, it feels like it’s been here forever but its true age is about 40. We’re back in the 1970s, but in a good way. Back to that time of waiter dominance and formal service, reminding me of nothing so much as those fancy, silent meals I used to endure, where only the waiter party tricks made the thing bearable to my 10 year old self. Crêpe Suzette prepared at the table; a Dover Sole de-boned in front of your very eyes. Waiters who made a fuss of you. Theatre.

And if you’d like to drop £140 on the duck press dish, you can have a real bit of grown-up theatre all for yourself. But you need to pre-book. Which I didn’t know, so unfortunately B and I had to make do with the à la carte. Given that B had just finished a mini-detox, this was probably a hidden blessing. I won’t tell you the whole duck story, it would spoil it for you. But the duck comes from the House Burgaud in Challans, which supplies Tour d’Argent in Paris, where this dish was made famous. I’ve had it there. A hammy, dreadful tourist trap, but a food bucket list item nonetheless.

But back to the here and now. Really good French bread, with chicken liver pâté and cornichons. Showing unusual restraint, I only had the one piece. But it was enormous. B and I both fancied the smoked salmon and the Pata Negra ham, both of which are prepared table-side. The smoked salmon comes with all the trimmings, the ham with caramelised pear and quince chutney. Here, more is more. My sort of place. Nothing knowingly undergarnished.

Following that, I chose the light option of Coq à la Royale. Slow cooked boned rooster, stuffed with foie gras, truffle and Madeira sauce. Red cabbage and blueberry chutney. A bowl-shaped mound of poultry pieces, stuffed with foie gras and on a bed of deep purple cabbage, this was unlike anything I’ve eaten in the last three decades. Dark, rich and intense, it hit all the taste buttons. Salty, sweet, sour, bitter. I always default to Asian for that combination but they were all present and correct here. Glorious. A dish of sheer excess. I ate every last bit of it.

B, still clinging to the memory of the detox, had the filleted wild sea bass, parsnip mousseline, coated samphire and salsify and chicken jus. I tried the fish. Moist and tasty. But it wasn’t the rooster. And talking of poultry, there’s also La Poularde de Bresse Demi Deuil. According to the menu, the recipe was created by la Mère Filloux, mentor to Mère Brazier, the first female chef to be awarded three Michelin stars. Truffle slices placed under the skin, the chicken is poached in a sauce Suprême for two and a half hours, before being served at the table, in two courses. Ideally enjoyed by two, according to the menu. At £140 (price may vary according to the truffle season – I bet it doesn’t go down though) you may want to spread the joy.

We ended with a Mango Tarte Tatin, white chocolate mousse and raspberry coulis. Not my favourite dish of the evening, the mango being a little too juicy. I prefer the classic version. I should have stuck to the 1970s option and gone for Oefs à la Neige, floating islands. Next time.

For there surely will be a next time, and I will, again, be torn between the duck, the chicken and also the brand new/old lobster made in the lobster press, manufactured in the 1920’s and rescued from an hotel by the owner. A labour of love. Almost unique. Like this restaurant. 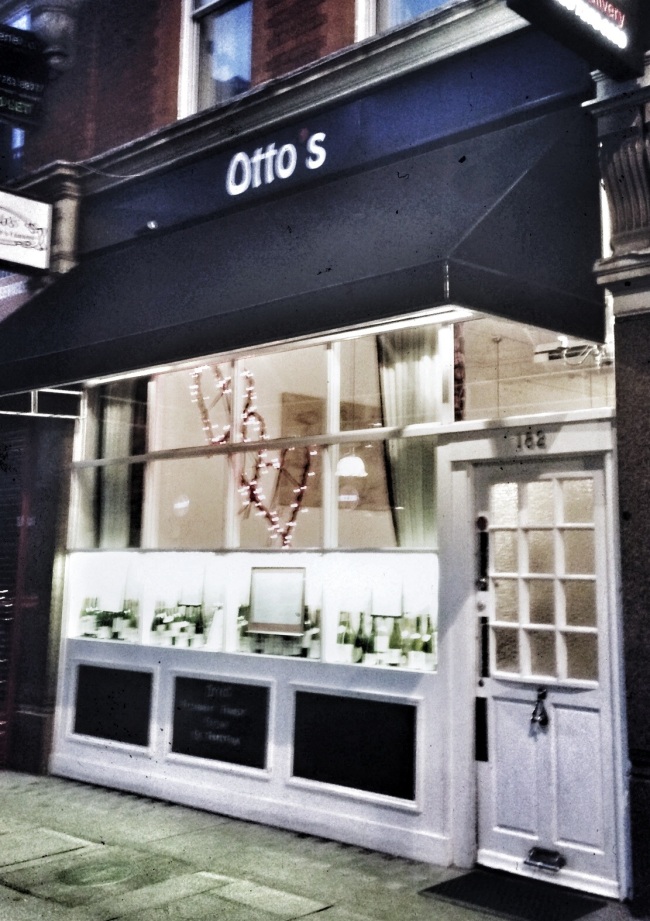 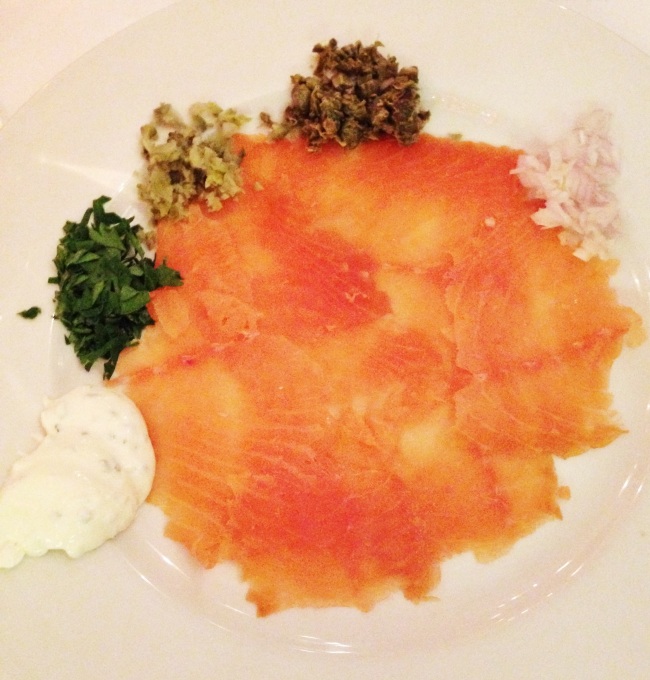 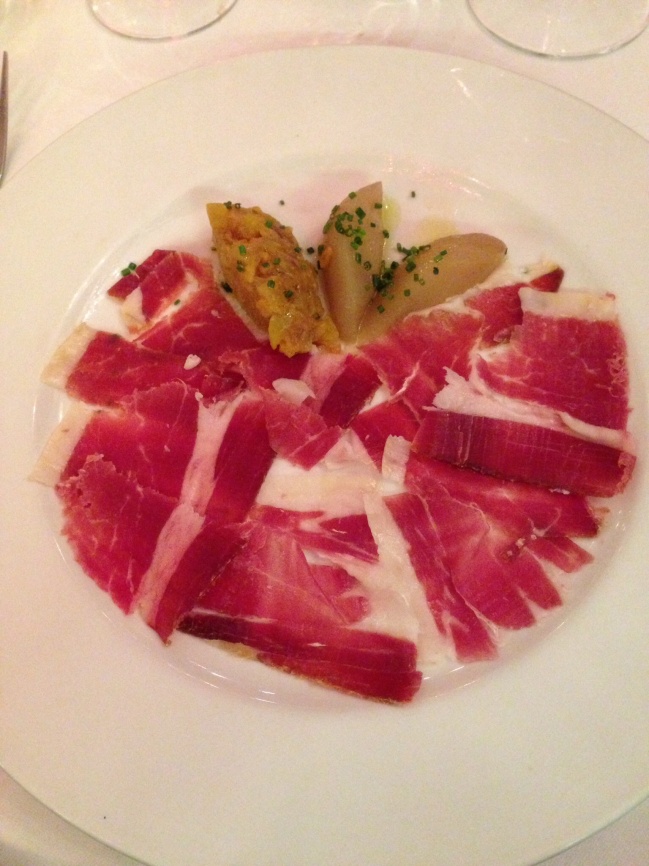 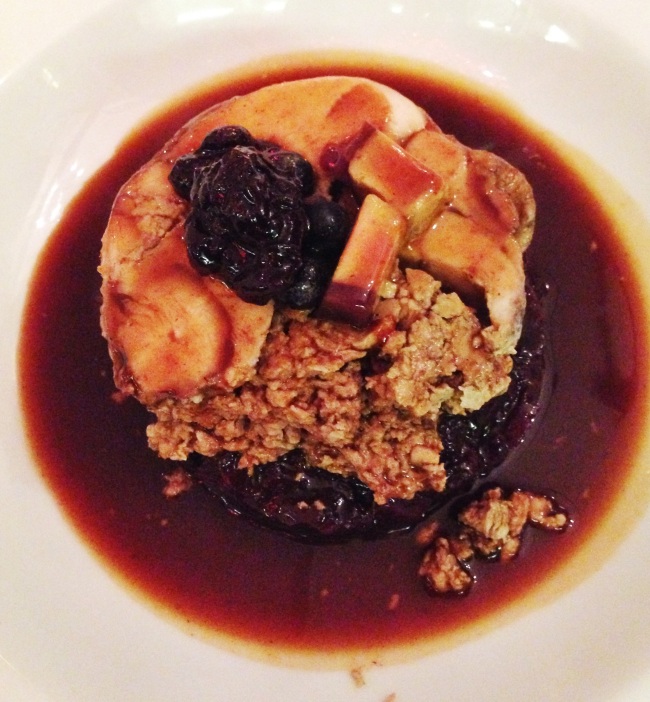 Coq à la Royale. Fit for a king, too 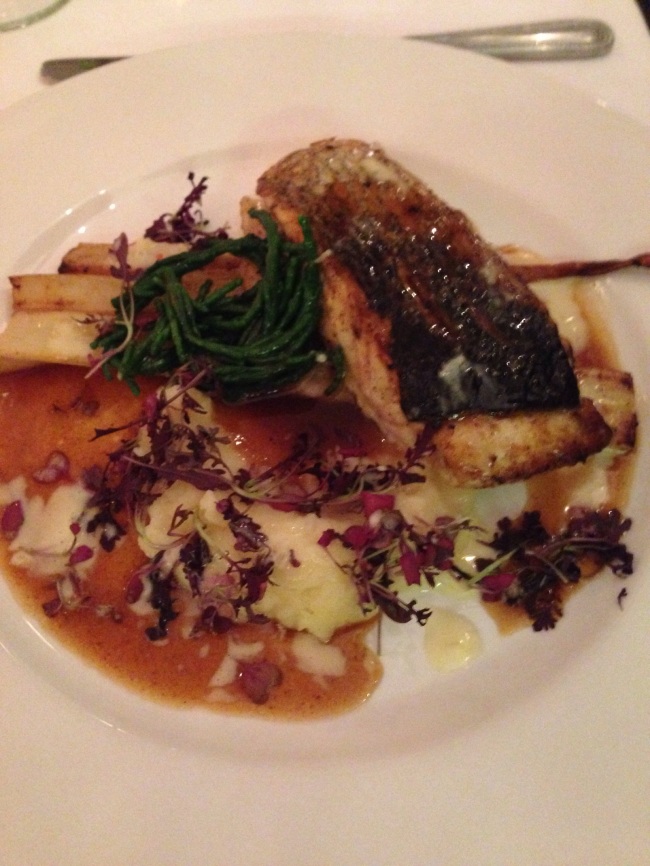 Sea Bass. With chicken jus. Not quite surf n’turf 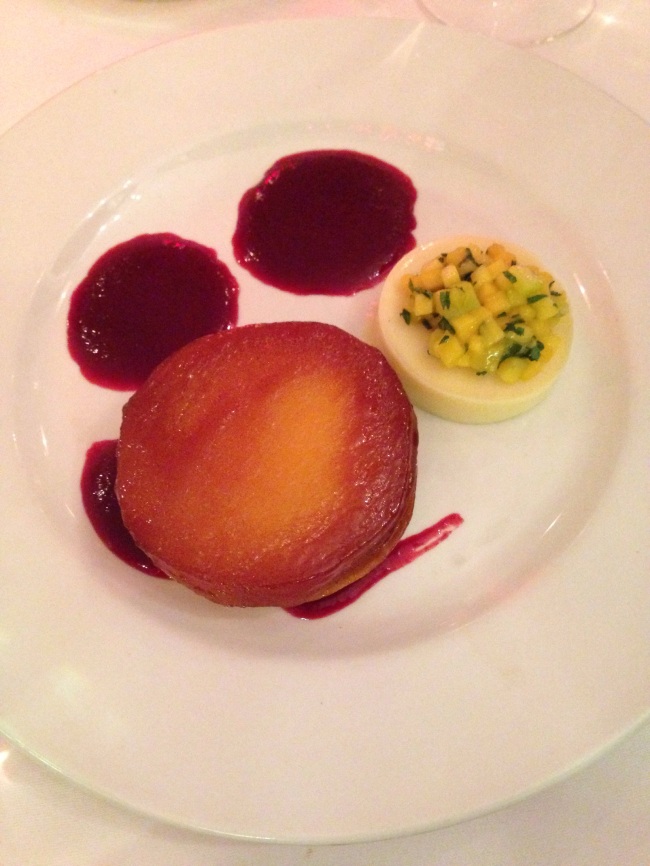 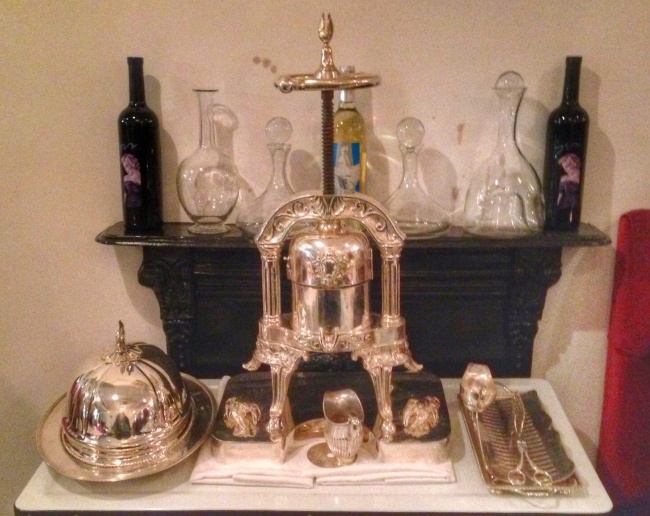 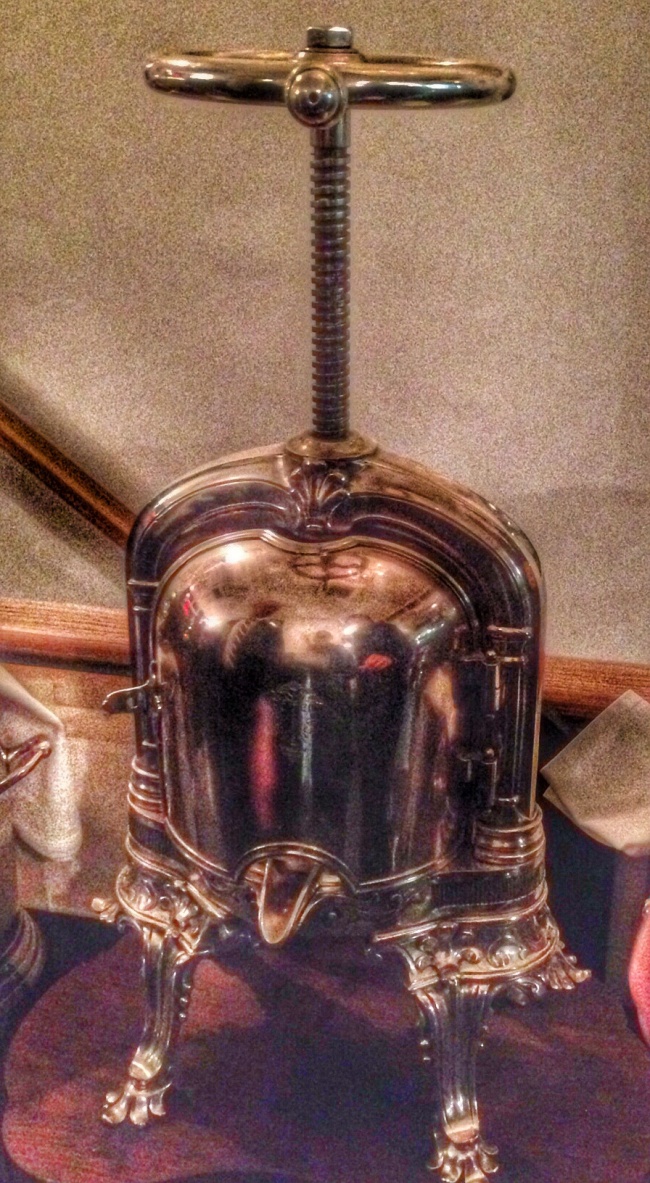 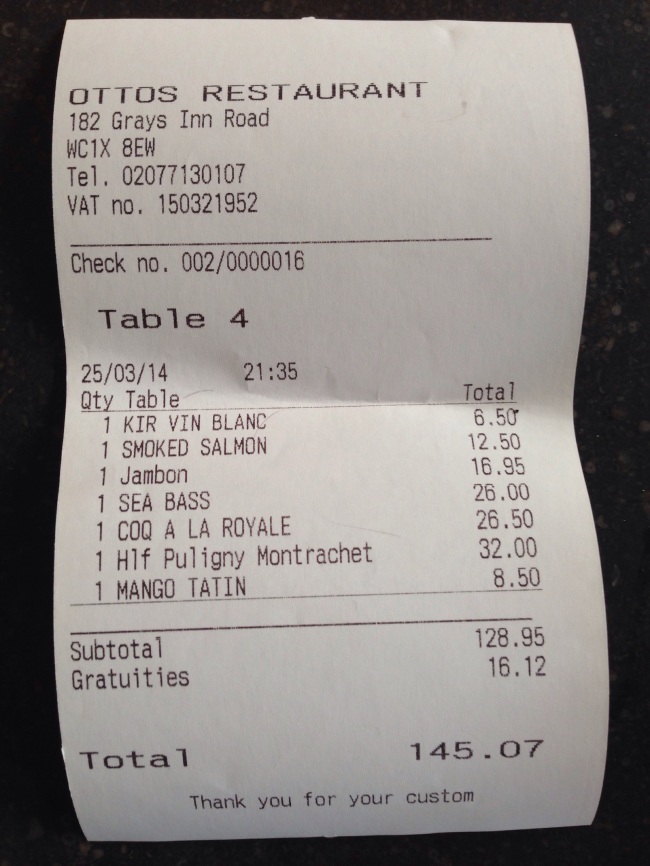