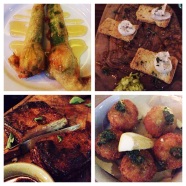 I have a confession. My blog has a big fat Salt Yard gap in it. No, I have never been to Salt Yard, Dehesa, or, most shockingly, Opera Tavern. I thought that I had a Salt Yard jinx and I was fully expecting this visit to be derailed by some sort of crisis, but clearly the Salt Yard hex has been lifted and I will shortly be making my way to Opera Tavern, for their legendary Iberico pork burger.

I expect that the ember reference is something to do with the fact that there is a charcoal grill and that it is the main event. Eight out of ten of the fish/meat dishes on the menu had the word chargrilled in them. And I know of no other place where they tell you what type of wood they are using in their grill.

This week, we will mostly be using Hazel and Silver Birch. And single species charcoal and wood. Next, they will be telling me from which forest it was gathered. And there will be one of those symbols which reassure you that you are not contributing to global warming and there is a replanting scheme. I am sorry, but I cannot take the truly special timber thing entirely seriously.

Out with regular dining companion, fellow lawyer and food enthusiast A, we were both in the market for meat. There is an interesting selection of fish dishes but we skated over them and went straight for the dirty stuff. A had already put a marker down for the Hot Smoked Gloucester Old Spot Pork Belly with Basque Cider, Smoked Apple and Oregano, whilst, I had not really got much further than the Ibérico Pork Fat Chips with Chorizo Ketchup. Understandable.

The menu is, unusually, Spanish and Italian, divided into fish, meat and vegetables, about five or six dishes in each section, with a couple of large plates to share. There is also a good selection of bar snacks, which you could use as starters. You can also have plates of cheese or charcuterie. Or even both.

There was a time when I could not have resisted Padrón Peppers. As I have discovered that you can buy them easily and make them at home in about five minutes, I have made so many that I am actually bored by them. I regret that, slightly. So instead, I ordered the whipped Lardo Crostini, with Guindilla (pickled pepper). Lardo, for those of you who don’t know, is a type of Salumi. Not salami – there is a difference. And it’s not lard. It will not surprise you to hear that this was rich, fatty and delicious.

Because we felt that vegetables needed to play a part, we also ordered Broad Bean, Smoked Ricotta and Mint Croquettes with Wild Garlic Pesto. Like a quirky falafel, these were deep-fried balls of deliciousness. And I will generally order a stuffed courgette flower, wherever it appears. This version is stuffed with Goat’s Cheese and drizzled with honey. Each courgette flower is £4.50, which is quite steep, considering their size. I would have preferred a larger courgette flower stuffed with a little more cheese and less of the courgette itself, but I have no complaints about the dish.

As a small nod to the healthy, we ordered Jamón Brined Free Range Chicken with Baby Leeks and Romesco. I’m not entirely sure what they mean by Jamón Brined. Brining normally means soaking in salted water. Does it mean that there is ham in the water? I have no idea. Anyway, the chicken was tender and tasty and whatever jamón brining is, it seems to work a treat.

But the main event was always going to be the pig. And very wonderful it was too. A massive slab of pork belly, fatty, crispy, tasty, juicy – served on a wooden slab with a rich sweet sauce and a smoked apple this was a behemoth of a dish. We were unable to finish it, between us. Perhaps that was because I had, within two mouthfuls of tasting the chips, ordered another plateful. Save yourself the trouble and just order the two, as soon as you get there. I could attempt to defend myself by saying that the portion was quite small, or that we had not ordered that many other plates, but I won’t.

A felt that there should be the option of the pork belly in a half portion. It is slightly too much for two, should you wish to partake fully of the rest of the menu. Or like A, you could just enjoy the remnants for breakfast.

Because both of us really needed, we thought we might force ourselves to have the Bitter Chocolate Ganacha (sic) with Salted Caramel Cream. I think it was at this point that A admitted that she had never had salted caramel. I hid my surprise not at all.

Despite the inability to finish the pork belly we both managed to locate our dessert stomachs with ease. A cast iron pot, with a piping hot baked chocolate pudding and salted caramel ice cream, this was not what I think of as a ganache. Or ganancha. But it was rich and not too sweet and in our eagerness to dig in, we both ignored the waitress, who said the pot was very hot. Tip: don’t touch the pot. I didn’t notice the music levels, which is unusual for me, so either I’m going deaf or it wasn’t intrusive. I did notice the table of blokes next to us, one of whom let out a loud “shitting hell” when presented with the bill. I wouldn’t have quite put it that way myself, but I can see how one might quickly reach shitting hell levels, with all those small plates and a little more alcohol.

Falafel sort of. But better

Objects in this photo are smaller than they appear 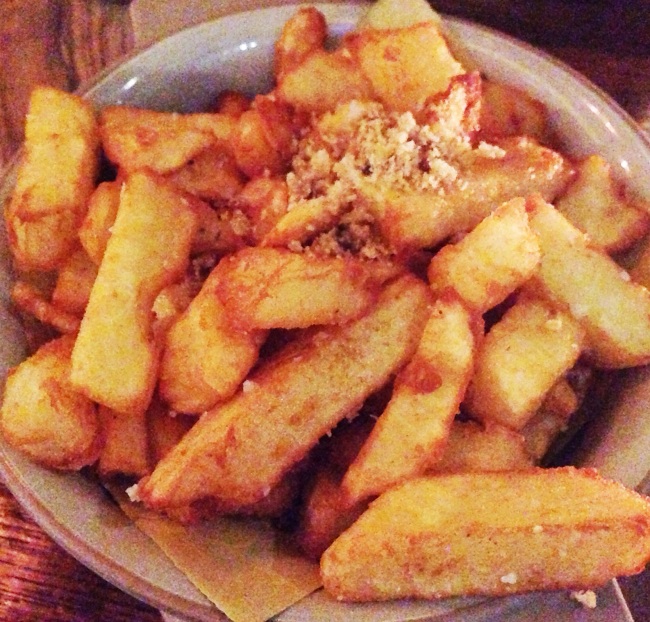 How could I not?

Pork. Pork. And more pork. And an apple.