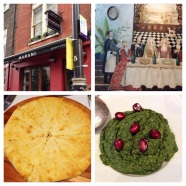 I wanted to like it, I really did. I’d been angling to go to Marani, a Georgian restaurant,  ever since reading a glowing review and I suggested to my good friend M that we go together. M is not only a brilliant dinner companion but also Georgian. Result.

First signs were promising, if slightly bizarre. I was asked if I was happy with the table I was shown to.I said I was waiting for someone and I had a chat with the friendly waitress. She’d noticed me staring at the large  mural opposite and particularly the real rifles embedded into the walls, which I feel  is a rather unique design feature.

A few minutes later I was asked if I was ready to order.    After  three attempts, I managed to persuade the waitress that I wanted to wait for my friend. At the next table, three slightly excitable men had arrived and were talking about their prison experiences. It became difficult to concentrate on the menu.

Given my well-developed control freakery, it will surprise those of you who know me that I would surrender all menu power to M. I’m not sure when that last happened. Perhaps when I was about 3. Probably not even then.

Looking at the menu, M was delighted to see various Khachapuri at the top. We had the Imeruli. It’s a traditional Georgian cheese and egg bread; flat, stuffed with melted cheese, like a soft calzone.  Delicious.  Another version is the Ajeruli, named after the region.  My family ruled that, says M, casually. I forgot to mention that she is a Georgian Princess.

We had Mixed Pkhali to accompany the bread. Three small dishes. Spinach and walnut in one, a little too fridge-cold with a strange aftertaste we thought might have been from  raw walnuts. M: this isn’t how it’s supposed to taste, it tastes of practically nothing. The artichoke and walnut salad was delicious. The cold aubergine stuffed with walnuts was  fine but the dishes were quite small ( M: not very Georgian-generous).

It’s a Georgian tradition not to clear any uneaten food from  your first course, in case you don’t like what follows. I thought it was a lovely idea. I didn’t realise it was going to be essential.

The Khinkali, traditional meat dumplings, were large soft purses,  filled with meat (beef, as far as I could make out) flavoured with coriander and red peppers. M: red peppers are not authentic. Insides, the meat sits  in gravy, so you have to eat these rather carefully. I’m glad that I was warned, otherwise I could quite easily have been wearing most of the gravy down my front: not a good look.

Less delicious was the Lobio,  Kidney Beans seasoned with Georgian Spices, served with Mixed Pickles. This normally comes with a sharp plum condiment, I am advised. Unfortunately, this version was bland slop, with very little flavour. The pickles that accompanied it tasted strange. Unpleasant, even. We had about two spoonfuls of the stew and gave up. At this point M was getting rather exercised about the lack of authenticity and flavour and telling me that we had to go back to her house, so that she could show me the real thing.

Also unpleasant was the Sacivi,  Chicken in a Walnut Sauce with Georgian Spices, served with couscous or rice. M was visibly shocked at the mention of couscous in a Georgian restaurant, like finding bacon on the menu at Blooms: just wrong. M: couscous doesn’t exist in Georgian cuisine. That may be so, but I suspect that  it would have been better than the disgusting rice that was served with the inedible, tough chicken.  Cooked to the point of melting sogginess, almost like a rice pudding, the rice tasted of nothing other than starchy cooking water.

At this point a quite scary- looking man came over to ask if everything was okay. He looked like he might be the owner. He was so forbidding in his appearance that unusually,  I felt unable to be entirely honest. I pointed out the dishes that we liked and I was conspicuously silent about the others. This was clearly too subtle an approach.

We  contemplated dessert. Georgian Yoghurt, Served with a Walnut Preserve, which we almost fancied; Mille-Feuille Puff Cake with Light Mascarpone Cream.  M– mascarpone cream not authentic, so we can’t have it. We gave it a miss. At this point the lure of M’s kitchen was too great and we skedaddled out of there.

It’s not cheap. And they add “optional service” without telling you how much it is. 12.5%, by the way. Not that there was anything wrong with the service. If the food had been half as accomplished as the service we might have had a decent meal. 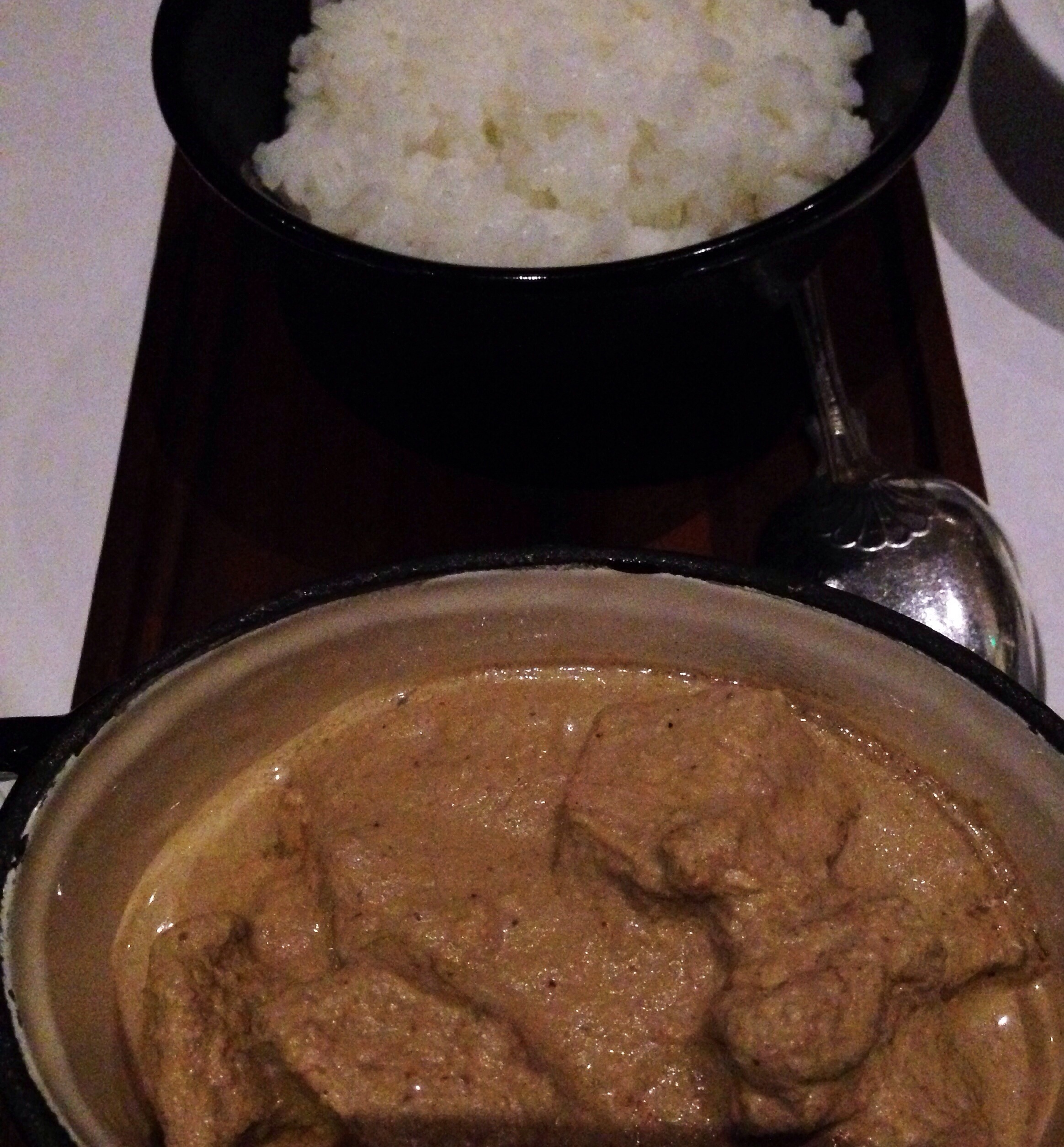 Leek and artichoke. And walnuts, obv.

← The Ivy. Clinging on. The Magdalen Arms, Oxford. A Life of Pie. →