I used to go to that Marcus Wareing place in the Berkeley Hotel when it was a dead posh gaff, with its dark velvet walls and more waiters than you could shake a stick at, not that I’m in the business of shaking sticks at waiters. It was proper faine daining, with its two glittering Michelin stars, fabulous wine waiter and gloriously camp sweetie-chariot, from which you could choose a little going-home present, the demise of which causes deep sadness to this day.

And some truly memorable meals there, mostly dinners, including a brilliant dish of cauliflower, seven ways and a pasta dish with vegetables embedded like fossilised ferns, pretty as a picture. I loved MW for that vegetarian menu and they always remembered that I was, (was, note) and that care in all things (as well as THE TART, of which more later) was one of the reasons that I was, for years a regular visitor.

I’d stopped going though; a few mistakes in the kitchen, someone heavy with the salt-cellar more than once had taken the shine off. C, my regular MW companion, is, unbelievably, even more unforgiving than me (two salty strikes and you’re out) and was unwilling to try again so I was extremely pleased to be the plus one at a lunch for the other half of the Axis, hosted by two luminaries of the Bar from a set with a lagomorph in its address, and a number 3. You can look that up. I can’t always be doing your work for you, you know.

I’d wanted to see the re-vamp and the new casual atmosphere.

And in a first for this blog, a little Vimeo of the refurb, so you can see it for yourself and save me the trouble of explaining why I don’t think that this is a more casual restaurant than the Marcus Wareing of old.

I confess that I found the room somewhat cold at lunchtime and given the formality of the service, almost indistinguishable in feel from its predecessor. And they still iron the tablecloths on the tables during the lunch service.

And whilst the cheaper lunchtime “plates” menu looks to be a bargain and they promise to get you out in 40 minutes, in a Michelin does fast food sort of way, to me that is missing the whole point of Marcus. It’s a destination restaurant. Somewhere I would choose as a treat. I would never think about just dropping in here, even now I know I could. According to a recent interview, the idea is to cater for people who want a course, a glass and be out in half an hour for £20. I didn’t see many of those when I was there. Half-empty, it felt a little flat. None of that good dinner party atmosphere and American-style service that’s Marcus has said he’s looking to create. Maybe that just happens at night; you can’t really have a dinner party atmosphere at lunchtime.

And for lunch, you can have the plates thing, or a choice of two three of four courses and a tasting menu at £120. Given that we were guests, choosing the tasting menu would have been inappropriate, nay rude, so we did the conventional 3 course menu at £85. Split into four sections, it’s simply laid out and the language is unfussy. I chose the burrata, lemon and lardo. But before that, caraway seed bread, crusty and light. And some gougères. They took three away before bringing a new bowlful. We protested, but to no avail. I think they thought we were joking. I hope the staff ate them. I couldn’t bear to think of those puffs of pleasure being wasted.

And the burrata was fabulous. The lemon and lardo a great foil for the delicate cheese, I loved this,  simple, yes, but delicious. And then Turbot, Dorset snails, shallot, gnocchi. I baled out of the snails. I’m afraid that I can’t eat anything that leaves a slime trail and whilst it would give me some pleasure to ingest those garden terrorists, I’m afraid it’s a taste too far for me. I would fail any bushtucker trial because I would actually die as the centipede, or the kangaroo’s anus or other boak-inducing delicacy was placed before me.

It may be that the snails would have added something unimaginable to this dish but I’m sure not. This was rich and salty, with an onion-y jus, the gnocchi browned on the outside and a perfect piece of turbot on top. What elevated the dish was the use of the pickled shallots. Brilliant. Deceptively simple.

We did not even pretend that we would not eat dessert. There is, apparently, a thing that I do, when I am considering uber-gluttony. I sort of play a piano with my fingers, over the relevant part of the menu, drawing it all in.

Well, I ask you, when faced with these choices, what is a girl to do? I was persuaded away from the strawberry and the pineapple, but not before we had negotiated two of the warm chocolate crunch items. It seemed necessary. But it was to console me for the lack of THE TART. I mean look at it. If it’s good enough for the Queen (for whom it was prepared) it’s good enough for me. And when Mr W came to our table, we practically begged. How long would it take, we said, we can wait, we said. But no, he couldn’t oblige. We could, however phone up and request it in advance, if we would like it next time. That man knows how to talk to a woman. That was all he needed to say. But not before Axis-half had made sure that he had a business card in his hands. As if he had any choice.

Standout star of the show for me was the toffee, peanut and milk chocolate nougat, but they were all good. A kitchen which doesn’t see dessert as an afterthought, they were all good. As were the raspberry-powdered chocolates and the posh chocolate Jaffa cake thing which came with the coffee. It’s not the trolley, mind, but I forgive him. Almost.

And soon, we will be seeing Marcus does Masterchef. It will be interesting to see what effect that has on the empty seats at lunchtime – it certainly did wonders for Le Gavroche. Marcus says he won’t be giving up the day job and I hope he doesn’t. With this and the Gilbert Scott, not to mention Tredwells in Covent Garden, he is starting to move in the direction of his old master Mr Ramsay, to the world of restaurateur, rather than chef. Hmm, television. I wish him luck. Meanwhile, remember to phone up for the tart. You know you want to. 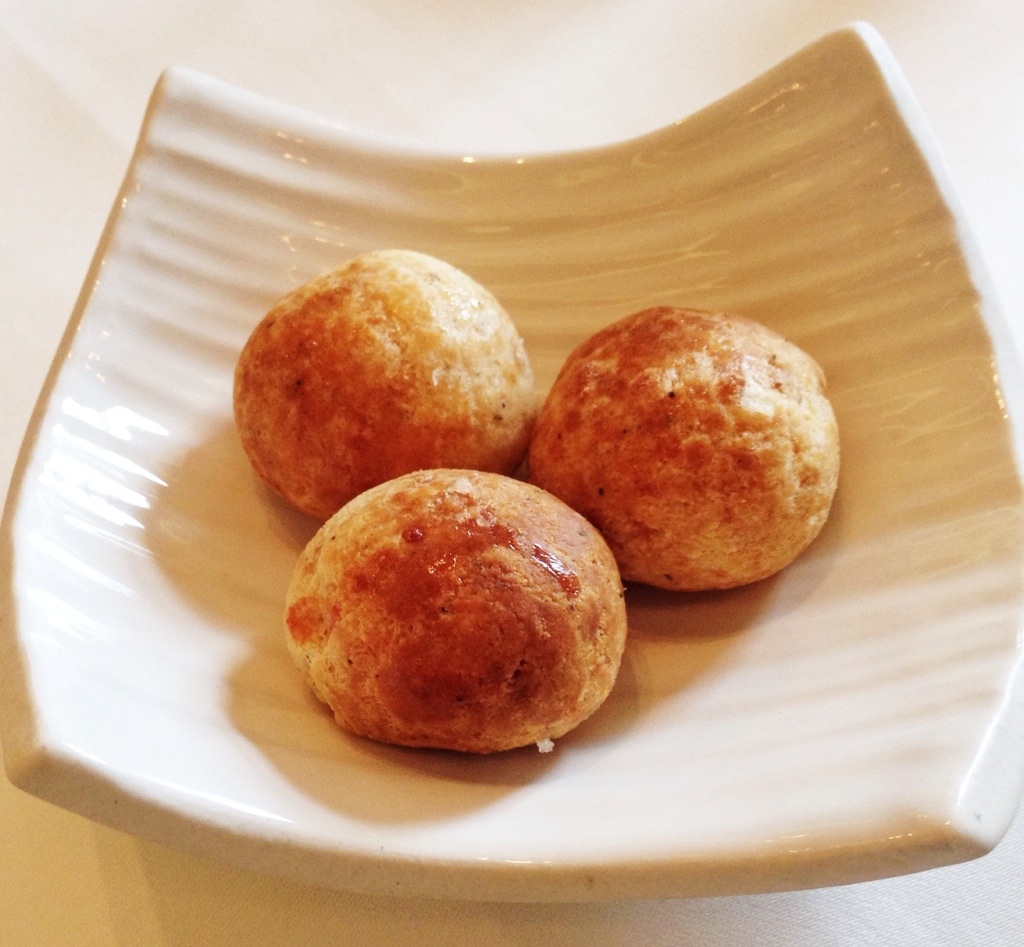 Gougeres? We was robbed.

Caraway seed loaf. caution : Bread is bigger than it appears

Axis does scallops and cauliflower. I was allowed a taste despite the sharing issues.

I liked the shallots a lot.

Here’s one you can’t make at home

Because we hadn’t ordered enough chocolate.

I prefer these to Jaffa cakes, strangely.

Lemon and tea thing. If you like that sort of thing you will love this.

The wall covering. From velvet, to something you could grate ginger on. The jury is out.