Persian cookery. I’ve always been a little bit captivated by it, since I was first introduced to it at boarding school, where there were a number of Persian pupils, refugees from the last days of the Shah. It must have been a bit of a shock for those evacuees, the journey from Teheran to Wallingford, what with the damp weather and the grim boarding school food.  It was the boys in particular who  used to try to recreate the food of their memories,  in the school car park, on a simple primus stove. Thus it was that I first came across that wonderful crispy rice, tahdig, in a school car park in South Oxfordshire, circa 1979.

Living in central London, I can visit Iran without leaving my home. Which is fortunate.

I’ve been to Pardis, on Connaught Street,  which is slightly more upmarket than some of the hookah-smoking joints on the Edgware Road. Excellent bread, cooked in a tandoor, but the tables are ludicrously small  and they can’t cope with the concept of lone female diner and when they said they wouldn’t bring me tap water, I felt that the restaurant/customer balance was somewhat out of sync.

Just round the corner is Colbeh, which I had always wanted to try, but been put off by the large groups of rather vocal Arab men and the preponderance of burquas. I wasn’t sure whether I’d be the only Jew in Connaught Village,   but there is a man kneading dough in the window next to an open clay oven and I might as well be Mowgli with that hypnotic snake as there is no way I’m going to resist the pull of that, burqa or not.

Colbeh has been operating since 2001 under the present management. It’s a plastic tablecloth, no-frills sort of place, more a café than a restaurant, and none the worse for that. I wouldn’t want you to think that you might be having a bit of a posh night out, just because it’s in Connaught Village, notwithstanding that you could pop in for a fireside chat with Tony Blair,  down the road. Though if you do try to see him without an appointment, you might be shot by one of the armed police permanently stationed outside his Connaught Square home.

Colbeh, as they say on their rather glorious website, “a cosy spot well used by our loyal customer’s and tourist.” It is not grand and you would not linger. Whilst they do allow you to bring your own bottle and there is no corkage charge, their attitude to alcohol is demonstrated by the bold red writing on their website, which tells you in large letters that there is a limit of one bottle for two people. They don’t actually say what size bottle though and the lawyer in me wants to test this by bringing a magnum.

But back to the bread. Beyond gorgeous. Light, crisp, warm, it is the perfect accompaniment to the various dips and sauces that we order. Hummus, because it had to be done, salad Shirazi, a chopped salad of tomato red onion and parsley and of course the tahdig. I was expecting a simple side dish of crisp rice, but  this came topped with a tomato-based sauce containing oka and lamb pieces . Where the sauce seeped into the rice, this made it slightly chewy but it was still fluffy underneath and crunchy on the outside. On its own, this could be a meal and at £5, that meal would be a complete bargain. I feel that I must eat it at least once a week.

Not realising that the tahdig was going to be of epic proportions, I ordered the Chelo Koresh Gheymeh Bademjan, a rich stew with lamb pieces, fried aubergine, yellow split peas and dried lemons, served with rice, for the princely sum of £7.90 and C had Joojeh Kabab Bhaktiari, which translates to the slightly less glamorous-sounding char-grilled baby chicken in a saffron sauce.  I particularly liked the side dish of crisp fried onions and raisins. More than it liked me, but one has to suffer at times. Simple food, well done, this was just up my street. Do note, however, that if you are vegetarian or just a fish eater, this place is probably not for you, what with its preponderance of meat and poultry dishes. I note with joy that they deliver locally.

Kateh, just behind Clifton Garden Centre in Maida Vale, is altogether different in feel. Simply decorated with Persian art, this  actually is the cosy neighbourhood restaurant that Colbeh thinks it is. I thought I was going to like it more than Colbeh when I first stepped in.

the man who greeted us must have been the  owner, so imposing and proprietorial was he. He may feel that it is part of his job to make physical contact with the customers and maybe some of his customers like that but I think it’s a golden rule of restaurants, not to be touched by your server. Unless you know them of course. Even then, perhaps. And pouring the dregs of an old glass of beer into a new one?   But I was the only English person in there and maybe I’m just a little buttoned-up about these sorts of things. Though I noticed that he touched C as well, which is not something I’d recommend.

It was a Sunday night and I wasn’t in the mood for a major blowout, so thought that I would just have a sort of mezze-type meal comprising three starters. First came some Taftoon, a wholewheat flatbread, which was freshly made, crisp and soft inside and altogether delicious. I used it to mop up the sauce which came with the Koofteh Berenji, meatballs with rice, split peas, minced beef, fresh plums and fresh herbs. Two meatballs for £7. They were lukewarm, but still good. Maybe they are meant to be at room temperature, I thought. Because I could see that the starter portion sizes were small and because C had ventured way beyond his own starter, I ordered another portion straightaway. The second portion was hot.

We also ordered the rocket salad with feta and pomegranate, which was fresh, but nothing special for £5.50 and the home-made beef sausage with braised artichoke – three small bites of beef sausage which, whilst tasty, seemed a rather measly portion for £7.50.  The grilled baby aubergine with dried mint, salad yoghurt, fried onions, walnuts, was delicious, but again, a really small portion. C ordered the baby chicken (again). It came with a large pile of saffron rice, studded with barberries and with a lump of butter which didn’t melt as the rice wasn’t hot enough.  But the chicken was moist and tasty, with plenty of saffron. The bill was substantially more than that at Colbeh.

The cooking at Kateh is slightly more refined than that at Colbeh, presentation is more careful and the portions smaller. I suspect that the cooking is slightly finer but if you ask me where I’d like to return, it would be Colbeh every time. Slightly chaotic, full of people talking very loudly, entirely lacking in airs and graces, the food at Colbeh makes no concession to western sensibilities which is why it’s full of Iranians, looking for home and me, back in that school car park, in 1979. 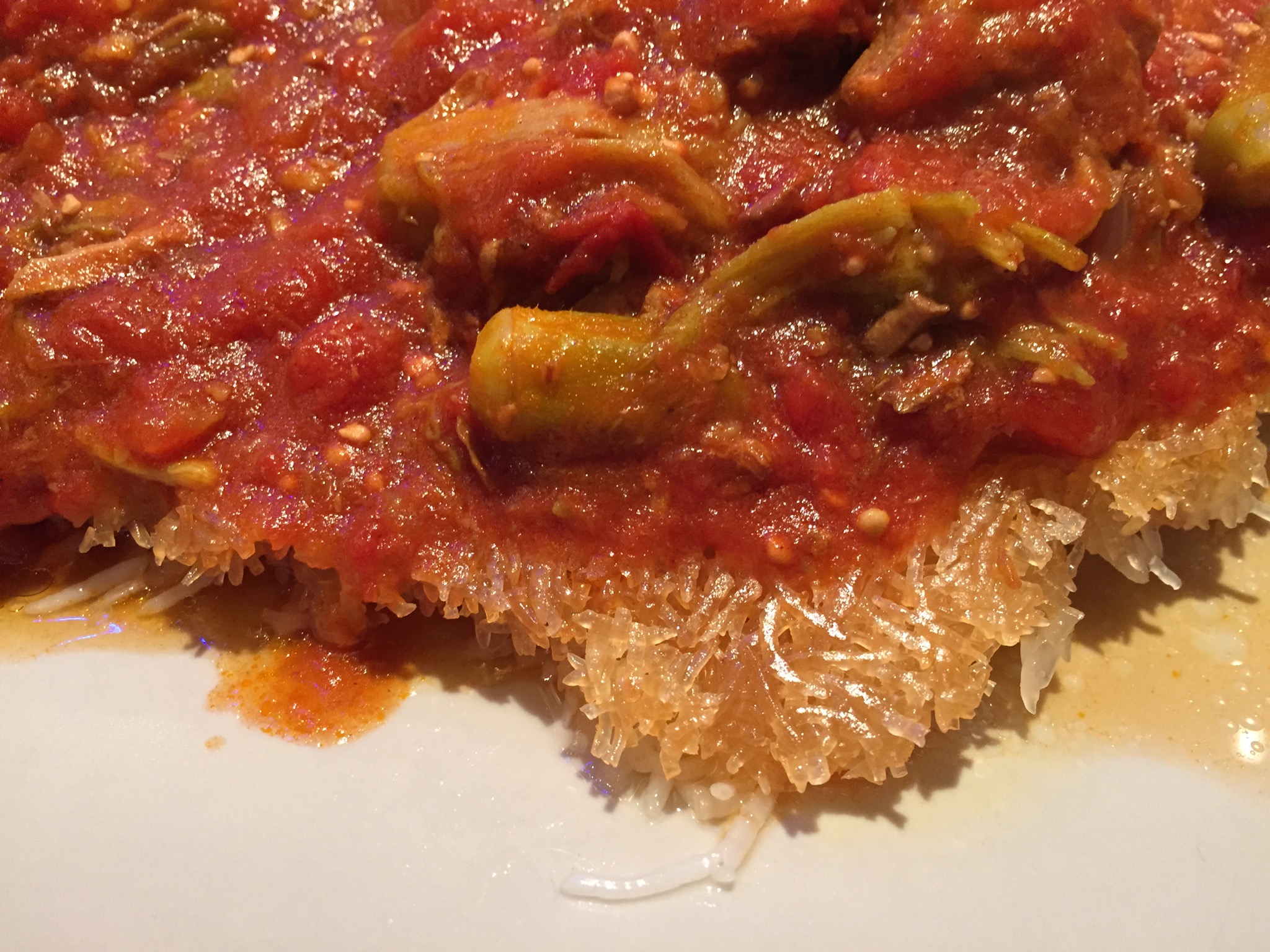 Rice crispies: what’s not to. love, at Colbeh. 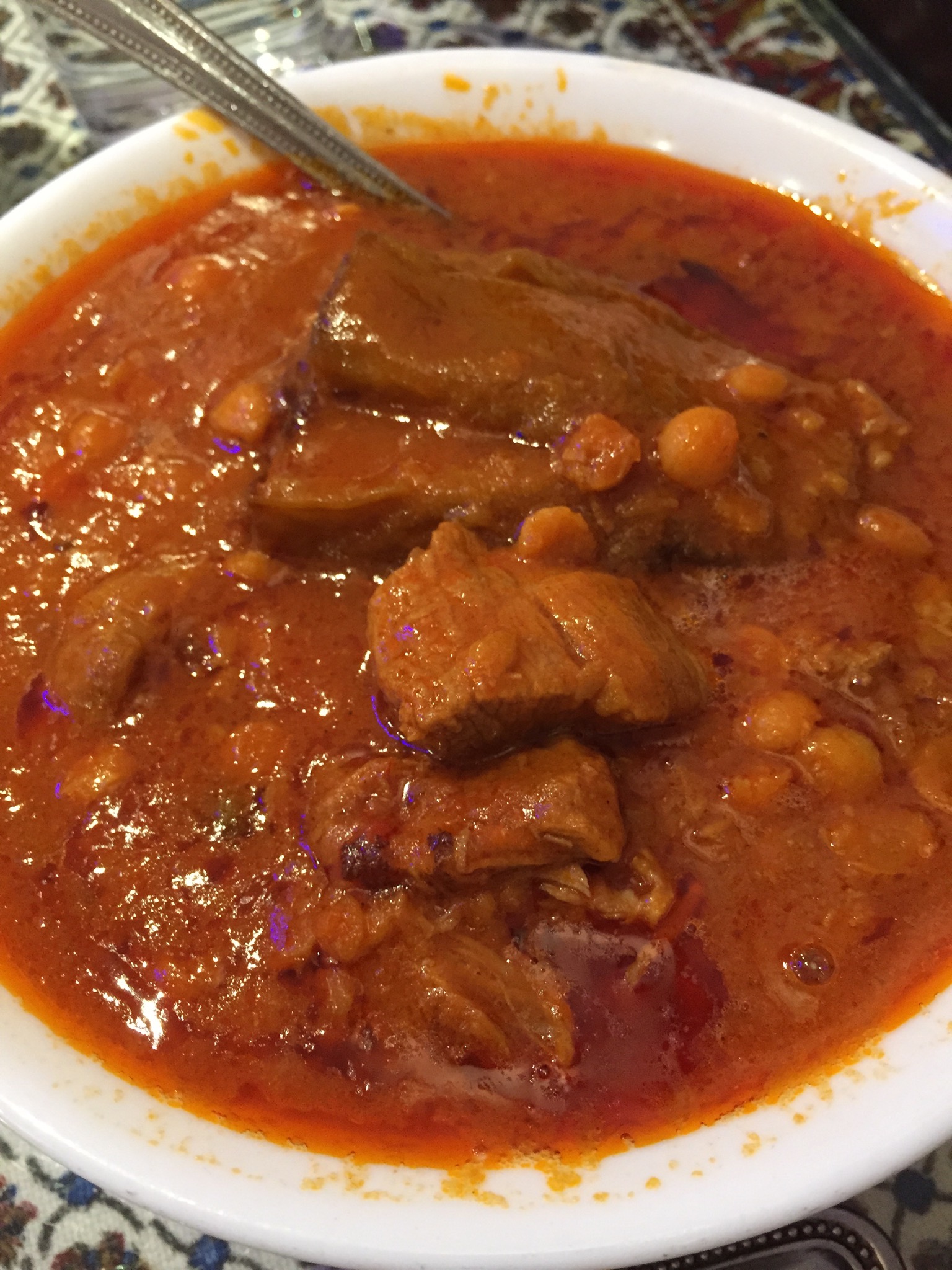 Got myself into a stew., Colbeh 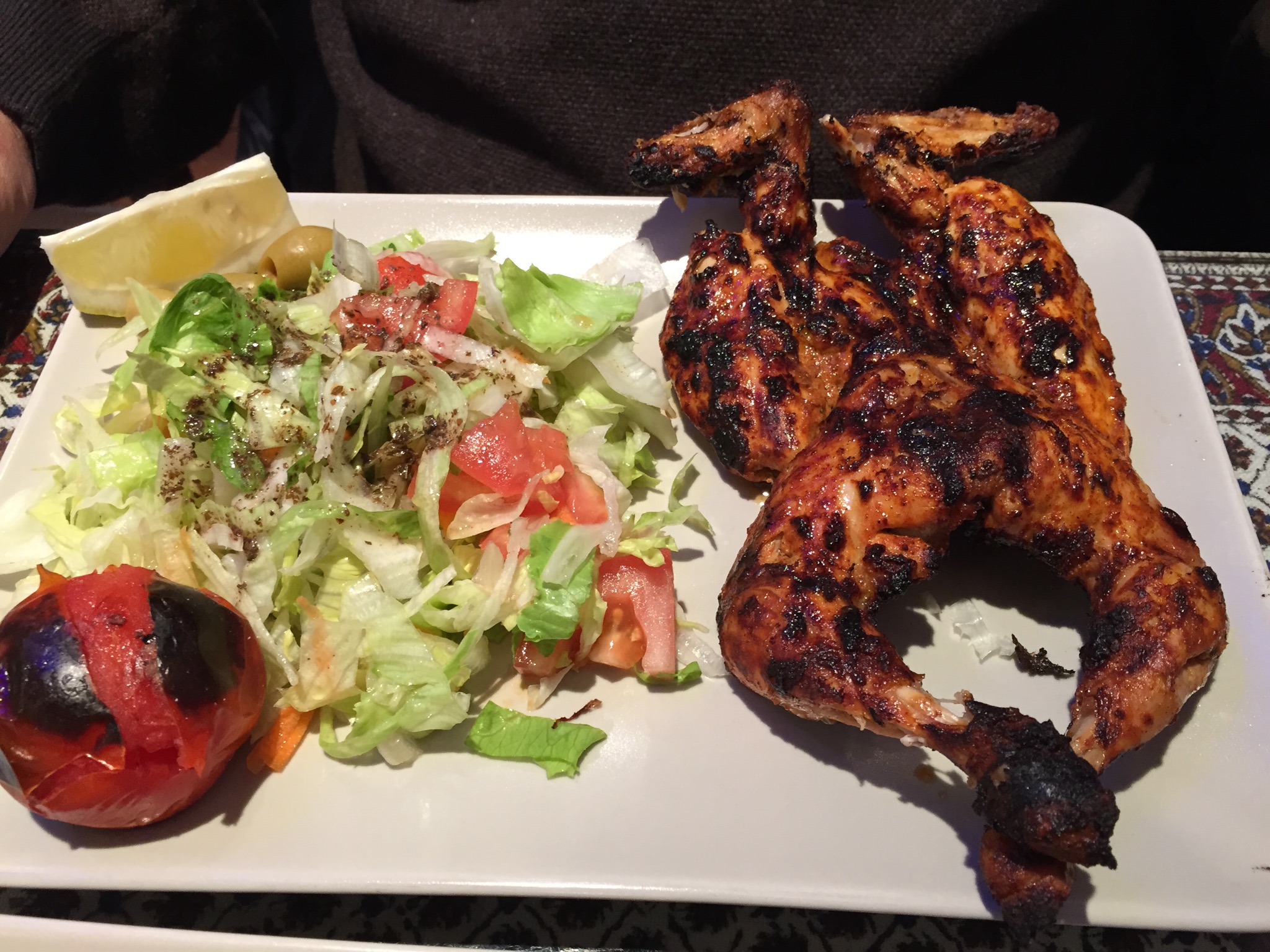 A lovely pair, at Kateh 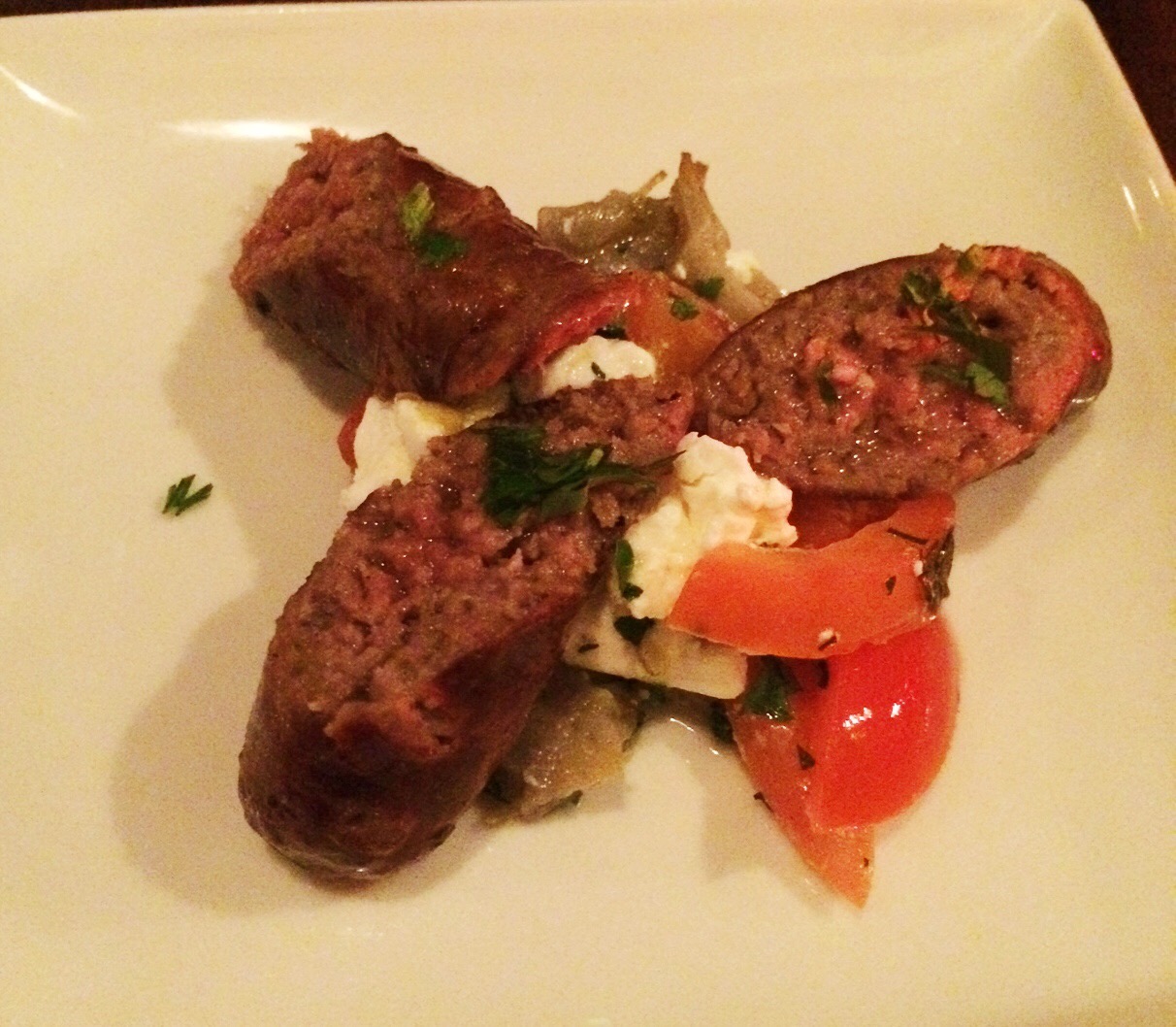 The damage. Colbeh was under £40