Let’s go to Roka, says J. It works for the diet and it’s just round the corner. Roka (pronounced Rock-a) has become our local client lunch eatery of choice, in that culinary hotch-potch that is NoMa.

What is NoMa, you may ask, unaware that is my pathetic one-woman attempt to turn the outer reaches of north Mayfair into a funky gastronomic destination. The arrival of the ludicrously-named Smack Lobster, with whom I had a little Twitter run-in (sexist signage, since you ask), was,for its brief existence  something Soho this way comes, but along with Roka and the not-bad North Audley Cantine, it is a drop in the proverbial.

But Roka is full other than a counter which doesn’t work for a group of three. What about Maze, says J, they do sushi. I am not entirely convinced about Maze because I know there is literally no time when it does not appear, touting its wares on OpenTable, with availability at very short notice.

Maze was once fashionable, in another century, when Jason Atherton, then a Ramsay protegé was in charge of the kitchen. It is still operated by Gordon Ramsay Holdings,which does little to increase my optimism. In a spirit of adventure tinged with resignation, I say yes.

As we walk in, there are lots of soft large chairs scattered around, in what looks like a bar crossed with an hotel lobby. There is both a drinks and a sushi bar, the latter with stools around it. Only one stool is occupied. We are shown to the sushi bar.  We ask them to move us to a table.

Each bar has an illuminated curved wall looming over it, backlit in purple. It is an unusual feature. The rest of the room is on various levels and is sectioned off by large printed screens of blown-up photographs, like something you might get in an adventurous motorway service station.

We are handed a menu. I see that there is a tasting menu at £75 for four courses. Another section of the menu lists dishes of what I believe is known as fusion cooking, here, according to the website, a fusion of French and Japanese. There is no sushi or sashimi on it. I ask how many plates you would need. Oh, three to four, says the waiter. With dishes ranging from £13.50 to £18, this is not going to be cheap. But I want simple sashimi says J, not all this stuff.

We ask the waiter. He seems surprised that we want  sushi and sashimi and comes back with a different menu. One with sushi and sashimi on it. In a restaurant which may or may not be called Maze Sushi they seem rather reticent about the sushi/sashimi offering.

Whilst we are spending seconds reading the tiny menu, we ask for edamame. We first eat the complementary biscuits with cheese in the middle. The cheese is oily.

Lukewarm, flaccid edamame beans appear, the insides slightly slimy, because they are overcooked. There is not enough salt and the portion is too small for £3.50. I am beginning to feel that three in a row at Roka would not have been so bad.

At this stage I would normally have ordered miso soup but I am rather astonished to find that it is not on the menu.

We order sea bass truffle, with shiso, and ponzu truffle oil. It is fine. Not sufficiently seasoned, under each tranche of fish is a sort of pickled sliced cucumber. The yellowtail with pecan, and pecan oil is less good. It is sliced too thickly and the dish lacks and zesty zing. Again with the pickled cucumber under the fish. Like their tiny menu, perhaps they only have the one pickled vegetable.

We order seared salmon roll, a selection of nigiri (raw fish on rice) and sashimi. Two servings of sashimi, because the description was unclear and we clearly over-order. The waiter does not stop us.

Before that though, spicy tuna tartare, with chili, garlic, sesame oil, yuzu avocado and wonton crisps. It takes a special skill to make food with those ingredients taste of so very little. The tuna was slimy and almost entirely without flavour. The avocado came in a hollowed-out lime. We get it taken off the bill.

The sushi selection is fine, but without any discernible wasabi on the rice. It is no better than Yo Sushi. The seared salmon rolls are adequate, but clumsily presented.

We are asked if we want drinks after the meal. After drinks are served, a dish that we (and they) have clearly forgotten about is set down with a flourish. We fuss and tut a bit and I do say the words ‘too late’ but they ignore that.

Other than the too-salty broth they were floating in, the lobster, tiger prawn and salmon dumplings,  which come after coffee,  are under-seasoned.

Service is shambolic and uninterested with a side of smarm from one of the waiters, which makes me bristle. I am still reeling over the bill of £230.44, which includes three moderate glasses of wine.

Summing up: Notwithstanding that it advertises itself as Maze Sushi on OpenTable, it would appear that the main restaurant is not a sushi restaurant and that you are meant to sit at the bar for that menu. The selection of sushi is woeful. It’s a poor man’s Nobu except I think it’s probably as expensive.

There are Japanese tourists in there. I want to tell them that we can do so much better than this.

When I get back to the office I see an email notification from OpenTable, telling me that my reservation at Maze Sushi had been cancelled. If only it had been.

Hamachi with pecan. On top of pickled greens 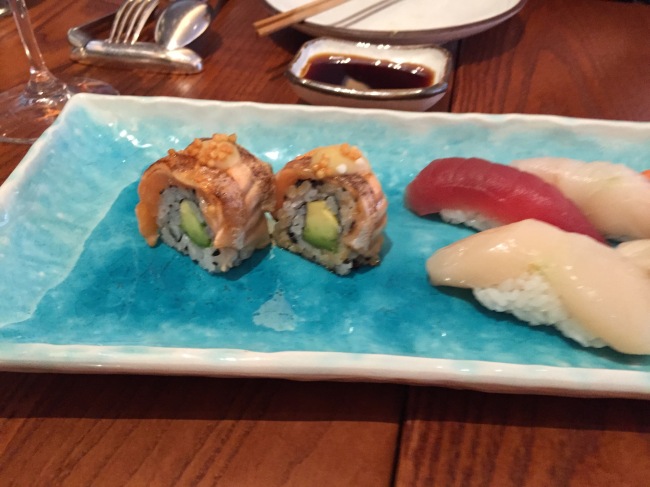 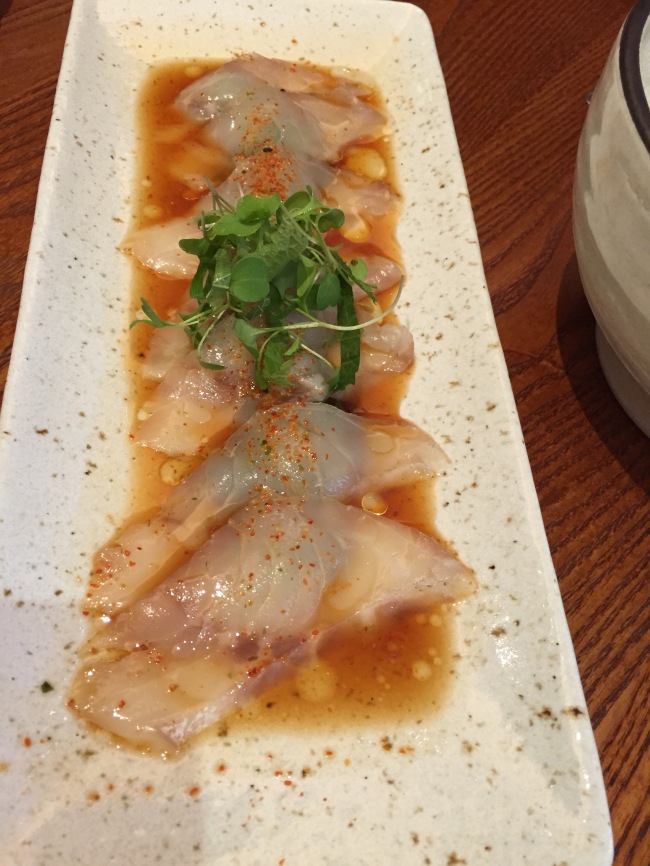 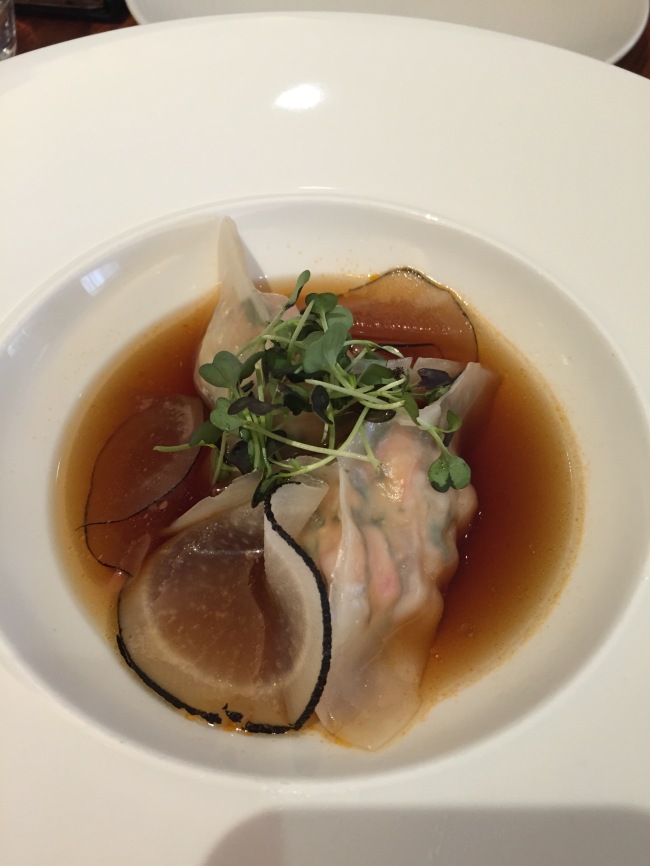