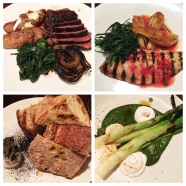 “Can I please have a gin and Slimline?” “Oh, we don’t have Slimline,” says the man who must be the boss,  such is his proprietorial air. I find out later that he is Oliver Milburn, joint owner.  The kichen is manned by Tomos Parry, winner of Young British Foodie chef of the year and formerly of Climpson’s Arch in E8 and Chris Leach, ex Pitt Cue Co, so the emphasis on the wood-fired grill is not entirely a surprise.

I know I should be ordering Fevertree, a superior product, but I have already mentioned my weight loss thing so spirits and Slimline are my low-carb alcoholic bridge to the full-fat world of wine.

“We will go out and get you some” says owner-man. “No, I say, really, I’ll have some thing else.” “We should have some anyway”, he says. So I have to wait slightly longer than I would have desired for my G&T but how could I possibly complain? Service beyond the call of duty. Tick-o-rama.

Kitty Fisher’s looks like it has been there for some considerable time,  but has actually been open for approximately five minutes, tucked into a corner of  the still somewhat louche Shepherd’s Market, in the heart of Mayfair. Named after the Kim Kardashian of her day (d.1767), Kitty was a famous courtesan, often painted by Sir Joshua Reynolds and famous for being, well,  famous. Legend has it that she was buried in her favourite ballgown. Class.

We are lucky to get a table; glowing reviews and only forty covers means that you have to be organised and book well in advance. Expecting to be seated in that cosy room shown on the website, the one with those leather banquettes, I am slightly surprised  to  be directed to a small and cramped table on the top floor, next to the door. I cannot pretend that I enjoy the blast of cold air every five minutes and C is not happy with the noise levels and our proximity to our neighbours. Personal space issues.

There is a lively discussion taking place on the adjacent table.  Two American hedgies, are talking about the relative merits of fighting a sex discrimination claim or going for the payoff. I am tempted to give them my business card as they have not quite understood the subtleties of UK employment law, but I desist.  It is not entirely their fault that we hear every word – we might as well have been sharing a table. There are only 3 tables on the top floor. Tip: try to make sure you don’t get one of them.

There was a moment when I told myself that I wouldn’t have any bread. That moment passed immediately the smell of the toasted loaf wafted over from the adjoining table. It is a superb sourdough crust,  with grill-stripes, served with burnt onion butter and dusted with a black powder. I taste it. Exactly like burnt toast, it is, I believe, onion ash.  The butter was wonderful,  but this powdery carbon was a taste on the outer reaches of pleasant. My inner neurotic worried about carcinogens.

I chose calçots.  I have discovered them fairly recently, via lawyer-friend A, who knows about these things. It’s like a cross between a leek and a spring onion; a Catalan speciality. There’s even a festival, Calçotada, which takes place in Tarragona each year, celebrating the calçot harvest where they are grilled, wrapped in newspaper and served with a Romesco sauce.

Here they also come grilled, on a bed of bright green sauce, lapping at the edges with brown butter and surrounded by peaks of soft delicious goat’s curd and smoked almonds. I look for the almonds, expecting flakes or some such, but all I can see are some tiny flecks, on top of the cheese. I can’t say I could really taste them but no matter as this dish was wonderful, almonds or no. And when I say bright green sauce I know you expect something a little more precise from a lawyer and I’d love to oblige.  Expecting a mouthful of something vegetal, I taste instead something creamy and buttery. I ask the waitress, who doesn’t  know either. “I’ll go and find out every detail,” she says. Maybe she will be able to tell the next person who asks, as we never do find out.

The first dish and the bread make good use of the wood grill, as do so many of the dishes and my lemon sole with blood orange, fennel and monk’s beard is no exception. The sole is tiny though and whilst delicious feels meagre for the £24 being charged. There are only a few decent mouthfuls. They take it off the bill. The fennel is wonderful, braised to perfection and I very much like the monk’s beard, like angel hair pasta in vegetable form, all in a rich, tart jus, flecked with blood orange bits.

On the other side of the table C is quietly demolishing his Galician beef with grilled onion, pickled walnut, pink fir portatoes and Tunworth cheese. I steal the onion, which has lovely crisp edges and my name on it. C says that this may be one of the best steaks he has ever had in England, cooked just as he loves it. To explain, C is Canadian and is of the opinion that USDA steaks are superior to British ones.  It is an argument rehearsed regularly.  The steak comes from a 12 year old dairy cow. Who knew? C is not  generally given to hyperbole and makes me taste it. Given that in all our years of eating out he has never given me food to taste, except under duress, if it wasn’t for the fact that mad cow disease is over I’d have been looking at that beef.

It is a joy to have a proper  restaurant, serving interesting and adventurous food of broad appeal;   the sort of food that would not be out of place in the fashionable parts of East London but which also works perfectly in the heart of the Mayfair mecca of mediocrity that is Shepherds’ Market. 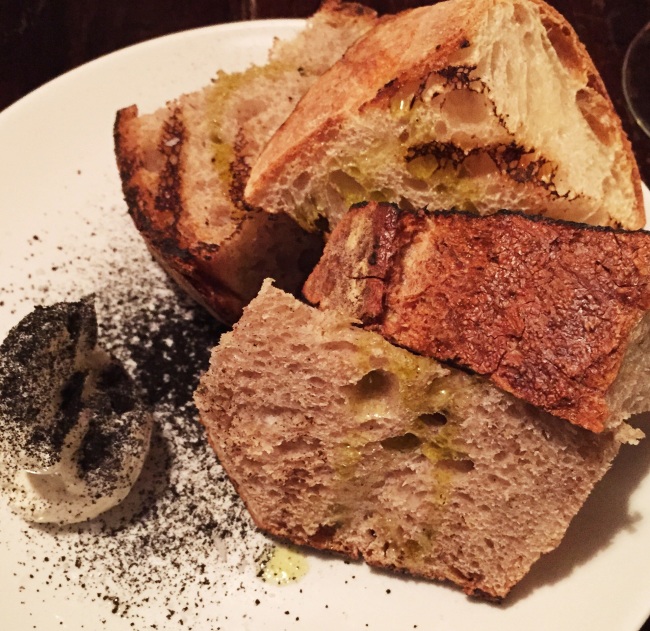 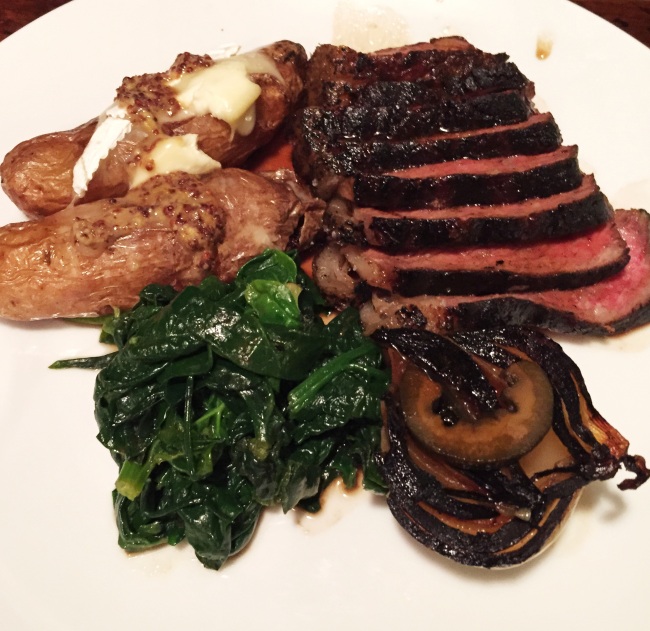