Wormwood. Your guess is as good as mine.

I have no idea why they named it Wormwood. After the herb? Or perhaps the star mentioned in the Book of Revelations, which, according to Wikipedia, falls to Earth and poisons a third part of the earth’s waters. #Awkward.

Described on the website as “wholesome, creative colourful dishes inspired by tapas/mezze culture executed with French gastronomic flair”, I’m not sure what I was expecting, but  whatever it was, it wasn’t this.

Bigged up by my foodie client, A, I was expecting Wormwood to be a little gem, a neighbourhood joy, a find. The website promised much too, with the chef all Marco Pierre White, in his White Heat period.

The restaurant is fairly modern, with quirky lighting, mixed with a little bit of ethnic. I like the feel of it.  I love the plates and find out from my companion The Georgian Princess that they hail from a company called West Elm and I can buy them in Tottenham Court Road. I feel my status as top shopper has been downgraded and I am concerned that I am losing my touch.

I have checked out the menu online, before I arrive. I am not sure that Dr Gerkings & Mr Cucumber is quite as droll as they think it is, nor does ForTuna!, tuna done four ways, have me rolling in the aisles.

The incredibly pleasant waitress makes sure we are at an end table although we need to be in the less lovely front part of the restaurant to achieve this. The service throughout is worthy of mention, as it is exemplary; both enthusiastic and intelligent it is unfortunate that the food does not appear to merit the enthusiasm with which the descriptions are delivered.

Complimentary bread arrives. Lovely toasted brioche, slices of baguette and a rather unpleasant brown bread which looks like sourdough but just tastes strange.

They bring the Dr Gerkings gherkin thing, as a mini-starter. It is a smaller version of the dish which is described as seared giant gherkin, compressed cucumbers, Espelette pepper, tsatziki, apple and cucumber snow, plus “some little surprises”.  It is refreshing although I feel there is not enough tsatziki and it what there is has been overpowered by the “snow”. I do not know what the promised “surprises” are.

We start proper with Trompettes Royales, described on the menu as Eryngii mushrooms (King Oyster) seaweed pesto, beetroot pink, bull’s blood sorrel and lovage. The presentation is bizarre. There are other mushrooms, as far as I can make out, but it all tastes so samey I can’t really differentiate. The texture is not pleasant and the blobs of seaweed pesto add little to the flavour. Leaves are scattered over the top. The chef has put a lot on the plate and it looks very complex but the flavours just don’t work together for me. It feels like much effort has been put into the ingredients and the presentation and the main event i.e. producing delicious food, has been forgotten. I am staggered to see that this dish costs £13 without service.

I hope for better from L’Aubergine, Smoked Aubergine Mousse, confit baby aubergine and chili and coriander oil. Confit: cooking things in oil without deep-frying. A small grilled aubergine is lying face down in an aubergine mousse. The skin is hard and inedible and the aubergine is not entirely cooked and is slightly bitter. The aubergine mousse itself is good, as are the thin aubergine crisps sticking up out of the mousse.

I am concerned that the next dish will not be the harbinger of good ForTuna! The plate is a riot of tuna prepared four ways: raw (fine, if a little tough), seared, the best of the four, some odd squares of air-dried chewy tuna, and some tuna spice-cured with za’atar and sumac, both of which I am unable to taste. We are directed to some leaves and apple on skewers before we start. They do not add a great deal other than clearing the palate a little from the aubergine. The homemade wasabi is fine and the seaweed crisps on the tuna are tasty. There are blobs of mildly flavoured goo, possibly the artichoke.  The dish is too fussy for its own good.

Pom Pom Pig (why?) is described as slow cooked pork belly, apple and potato purée, Ras-el-hanout and seared black pudding. The pork is fine, crisp on the outside and soft within,  but at £17, for a neighbourhood restaurant I expect more, portion-wise. There are sliced fresh apples and radishes and what I think are poached apples. There are grains of black stuff scattered over which I cannot identify and they are not delicious. Again, I am not won over by the cooking.

For the finale they bring a dish the plating of which is unfortunate.  Hummus, with pulled lamb, lamb jus, cumin, curcuma (known as turmeric to you and I) caraway spice and totopos. Having looked up totopos, I see that they are fried, thin tortilla strips which are served sticking out of a bowl of uncooked rice. Hummus, fashioned into a shape redolent of hind quarters of an animal,  has the meat gushing out of it, I am reminded of my days of horse-riding.  Posting a picture of it on Twitter I receive some excellent responses which I cannot share with you here in the interests of decency. The hummus is mild, without any of the lemony tang or smoky hit of cumin I prefer. It is, to use the forbidden review-word, bland. The pulled lamb is lukewarm and uninviting. We leave much of it.

There is that thing, where you hear a buzz about a restaurant and thus go with high expectations. Like when you’re told that an exhibition is life-changing or a theatrical performance is superb; you’re already expecting too much and the only response is a really, this? I thought the food here was ambitious, heartfelt and sincere but notwithstanding all of that it didn’t work. Too much emphasis on appearance and too little on taste; bizarre platings verging on the ridiculous, ingredients which brought nothing to the party. The menu promises a lot but the food falls short. It was half empty and whilst I wish it the very best of luck my guess is that will need to adapt to survive. 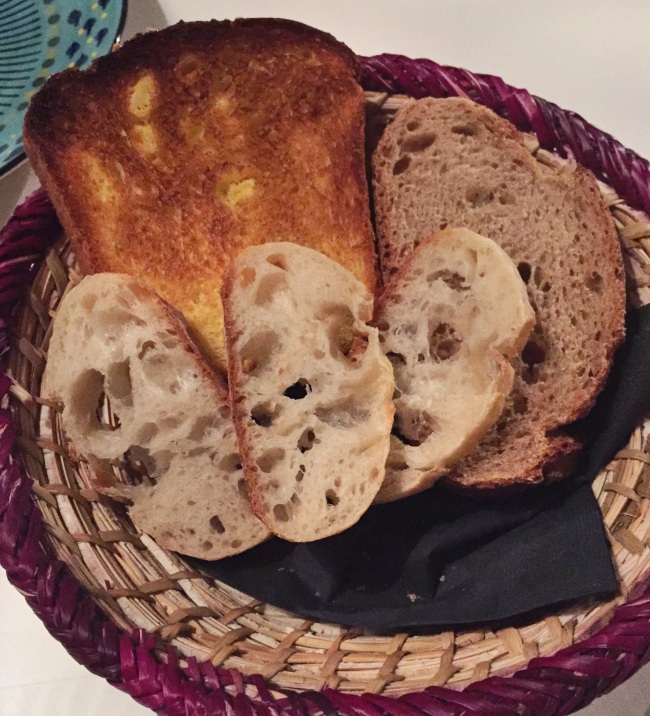 Apologies for BLUR. Mushroom. Greyness thy name is mushroom 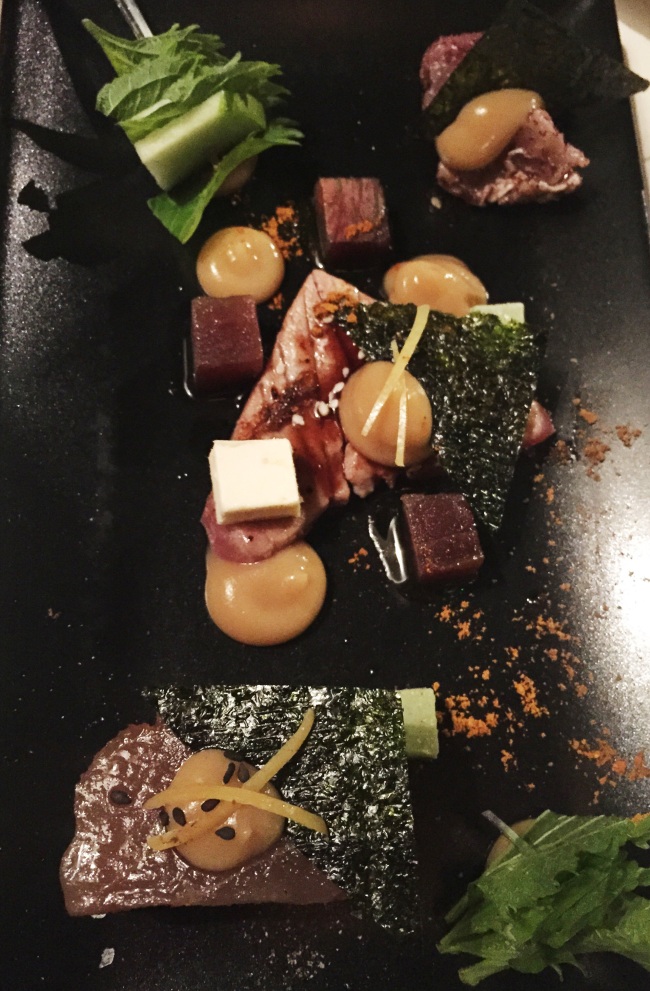 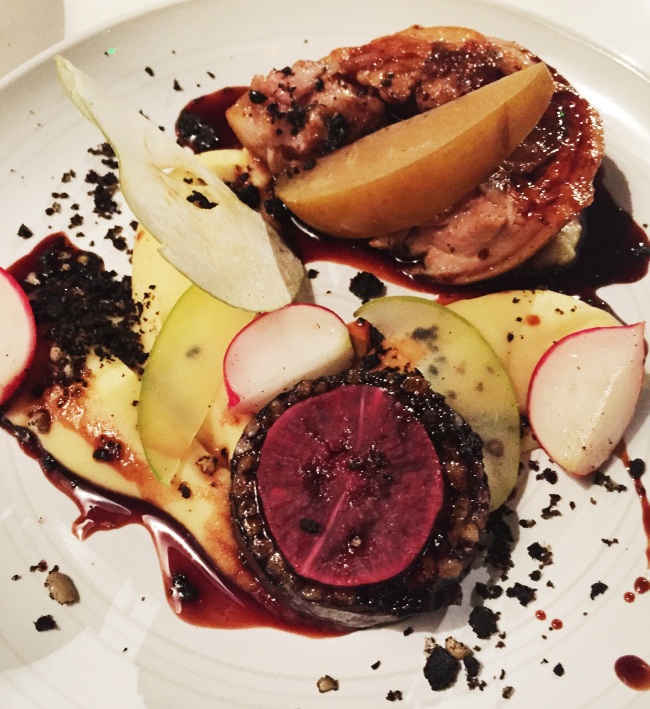