I was meant to be meeting a lawyer I had got to know on the other side of a messy, drawn-out transaction but she had suffered palpitations and had had to cancel at short notice. No, it was nothing to do with my being on the other side, before you ask.

C, failing to consult his crystal ball,  had already eaten and suggested I dine alone. I don’t mind a bit of solo dining, but having had a look at the menu online, I knew I would need someone to share all those dishes I was going to (over) order.

I’d had a meeting earlier in the day with client P.   Whilst getting into the lift to leave, he tells me he has some big news for me. Given that P knows me well, this is an act of unusual cruelty.  Leaving a six-hour gap between the statement and my tell me tell me phone call showed unusual restraint on my part.

P happens to be free for dinner and thus I kill two birds with the one stone.  P’s background is in architecture, having at one time worked for Richard Rogers, so I defer to him when he tells me that it is a dog’s dinner of a fit-out. The splitting-up of the space into triangular sections doesn’t work and the lighting is too harsh. The wall of steel fretwork, near our table, separating the eating area from the entrance, is larger than it should be, meaning that staff struggle to get through the small gap.  My personal observation is that our wooden table has splinters on its rough edge, so my dress gets caught on it.

Now I like an obscure ingredient as much as the next person, but call me old-fashioned, I  prefer to have some idea of what it is I might be ordering, before it actually arrives at the table. I manage to google that causa is, generally, a potato salad and I know what ceviche is but not everyone will know what tiradito is and I bet the majority of punters will struggle with “Chaufa-style” when applied to quinoa. I certainly did.

For your elucidation and because I wish that I had known, let me help you:-

Escabeche: meat or fish  poached or fried, marinated/covered  in something acidic before serving;

Pachamanca: A meat dish baked in a pot with the the aid of hot stones;

Chalaca: means only that it comes from Callao and most of the recipes I can find contain tomatoes, onions and lime juice;

Tiger’s milk: A marinade of (variously) lime, coriander, chilli garlic and ginger. Not quite as exotic as it sounds.

We start with some cubes of good bread, some of which is purple. There is a small bowl of sharp yogurt dip which we finish in short order.  I have had that sort of day so I order Frutas de Selva, which consists of Luna pisco, dark rum, blackberries raspberries and ginger ale. It is hard not to keep ordering more.

I ask the (very helpful and enthusiastic) waitress to go through the menu. What is it you want to know? she asks. All of it, I answer. But she clearly can’t go through all of it as I would wish, as we would be there all night. The upshot of this is that we have little idea what we have ordered.

I order the causa, but the avocado version. It is described as Avocado uchucuta, Muña corn, tomato seeds and yellow tiger’s milk. It is as if they are being deliberately obscure. When the plate is delivered there is a semicircle on the side of the plate of blobs of puréed avocado, what I think is green mashed potato, sharp lime-y tiger’s milk sauce, tomatoes and leaves, carefully presented. The potato could be corn, I’m not sure. It tastes not a million miles away from a de-constructed guacamole and none the worse for that.

P has the Hot Yellow Potato Causa, deep-fried spicy mashed potato cylinders, with scoops of mashed avocado and chicken. Again the tiger’s milk and blobs of avocado. I like this and think it is tasty and an unusual combination of texture and flavour.

We order all the sides, because, well, we can and they are only £4 each. There isn’t quite enough room on our table for all the food and I manage to drag the knitted pompoms of the bread basket cover through my chicken chalaca sauce, trying to make more room.

Of my organic chicken chalaca, I do not have a great deal to say other than the chicken is slightly tough and the sauce, whilst tasty enough, isn’t  particularly interesting and I couldn’t tell you what it is other than a creamy tomato sauce. P’s suckling pig comes with thin slices of fried potato and Andean Corn. I think both main courses are on the expensive side at £22 and £26 respectively, before service and sides.

The side dishes are disappointing. I really dislike the green salad with Ocopa sauce. Again with the obscure descriptions. It’s a cheese sauce but to me it tastes odd and slightly perfumed and is like a Peruvian Caeser salad gone a bit wrong. I am surprised to discover that P likes it best.  The Quinoa Solterito salad is under-dressed and notwithstanding that it contains lovely fresh broad beans, is too boring to eat.

Solterito: a vegetable salad prepared with giant lima beans and corn. See? Who would know that?

The Cusco Corn salad is a deep-fried corn cake with something wet and spicy on the side.  I can’t tell you what, because the menu doesn’t say and I can’t identify it. There are probably tomatoes and onions.  Cusco: a type of corn, in case, like me, you were wondering.

For dessert, because we obviously both need, a sort of queen of  puddings with dulce de leche, beetroot and dry Limo chilli pepper. I cannot taste the pepper. For those of you who don’t know dulce de leche,  it’s that caramel sauce you get in a  Banoffee, a dessert I refuse to diss. Here, it has a granular texture which is not entirely pleasant, with a hint of coffee and I am not wild about it, but P loved it. I would not recommend the Passion fruit frozen yogurt with the obligatory obscure ingredient – Hierba Buena, (otherwise known as mint), as it’s one-dimensional and is also too deeply frozen.

The Verdict : There may well be a great evening to be had, possibly at the Bar at Lima Floral, with their lovely cocktails and a few bar snacks, but it seems a departure  from the careful, considered food I ate back at Lima Fitzrovia, where the waiter explained every dish and the small intimate restaurant suited me better than this. The food, whilst pretty as a picture, was hit and miss and some dishes just didn’t deliver. And not at a price where it doesn’t matter.

That sort of day

Purple is the new brown. 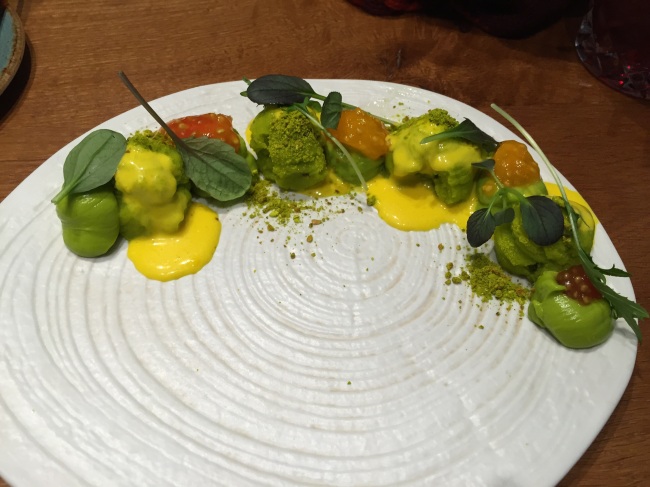 Dulche de leche. Under the meringue. And the beetroot.

← Trinity. Cream of Clapham. The Wild Rabbit. Not wild and no rabbit. →