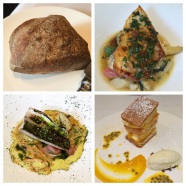 Why are we sitting in this traffic says C, not understanding why we can’t eat somewhere local. It’ll only be about half an hour in the car, I say. Trust me. And anyway, I say, I just need to get out of central London and I want to go somewhere grown up. As we are sitting in the traffic hell that is Shepherd’s Bush I glance out of the corner of my eye and I see the face but press on. It is too late to turn back now.

Here since 2001, La Trompette is bigger and better since its refurbishment in 2013. It’s part of the same group as Chez Bruce in Wandsworth and The Glasshouse in Kew, all restaurants with a solid reputation for well-cooked and elegant food. The chef here is Rob Weston, formerly at The Square, which is no surprise given that La Trompette is part of the Nigel Platts-Martin stable, he being the below-the-radar restaurateur, the one who discovered Marco Pierre White when he used to be a chef and is behind both The Square and The Ledbury.

On a small side street off the main Chiswick drag it’s all neutral creams and browns, with a little terrace at the front. It’s a polished operation with that hum of a well-oiled restaurant machine. Some people are dressed up and they don’t look entirely out of place. I suspect that a lot of birthdays and anniversaries are celebrated here, given its broad, cross-generational appeal.

We are seated at a table next to a sliding door,  and I notice a couple outside on the terrace,  braving the elements. As it is the end of May, it is, naturally, freezing but not everyone is desperate to sit out in the cold, so we ask for the door to be shut. We ask the waiter three times.

I have that superpower where I radiate an irritation aura and clearly it’s working as the maître d’ comes over and it is sorted instantly.

After doorgate, and as is so often the case,  calm is restored with bread. There are three types, but I only take one look at the dark, crusty triangle and frankly I don’t care what colour it is inside as I have to have that crust, regardless. The bread is hot, a thing not always devoutly to be wished, but here it is not only to be wished, but to be prayed for incessantly, as I hoover down a second portion and it is only with great difficulty I say no to a third one when offered.

I could happily live on bread alone, if this were the bread. Crusty, slightly sour, with butter melting into the chewy interior, I am now almost smiling and I order a glass of wine.

The menu is fixed at a set price, £47.50 for three courses, but out of the 15 choices for starter and main there are five dishes with supplements, so if you were to choose as C did, you will be spending an extra £12 and if he had chosen cheese, there would have been another £5 on top of that. I’m not sure I like the supplement policy; we aren’t talking shaved truffle or caviar.

My Cornish mackerel does not carry a supplement, though if it had, I would not have felt short-changed. A perfect tranche, in between two fat mussels, with grelot onions, lovage and linzer potatoes, what they don’t mention is the heat, by way of horseradish mustard at the base of the dish. Coupled with sweet and sour from the pickled onions this is an interesting, complex plate and I love it. C is less enamoured with the crab, which he feels has been somewhat overpowered by its yogurt dressing.

I am recommended the caramelised shoulder of suckling pig by the helpful waitress, who has clocked my penchant for all things crisp and crunchy. I cannot, however crisp and crunchy, actually bring myself to eat it, the very word suckling being the key contributor to my squeamishness.

Instead, I choose fillet of turbot, with herb gnocchi, white asparagus, radishes and Amalfi lemon gremolata, which is chopped lemon zest, garlic and parsley. Again, a very sure hand in the kitchen delivering a perfect piece of turbot, sitting atop delicious asparagus and radishes. I didn’t love the gnocchi, which tasted slightly medicinal, possibly the coriander, which I usually adore.  C is won over by the roast pigeon with cracked wheat, preserved lemon, dates and purple sprouting broccoli. I taste the sauce; it is rich and unctuous.

Because we have no choice, having to pay regardless, we order dessert and whilst I try to  persuade C to pick the banana soufflé with cookies and cream ice cream, somewhat uncharacteristically he  decides to go off on a frolic of his own and plumps for the tiramisu with hazelnut ice cream and grue de cacao. His dessert comes in that deconstructed style, with a large chocolate wafer covering the innards. Contented noises issue from the other side of the table, whilst I contemplate my mango mille-feuille, a tower of flaky pastry interspersed with Kent mango and cream with a scoop of Kaffir ice-cream on the side.

I choose the mango because it reminds me of my holiday in Thailand,  now a distant memory. Unfortunately, the mangoes are not the best that I have ever tasted, maybe because they hail from Kent and not South-East Asia and the pastry is not as delicate as I would hope for. The custardy cream, mango smear and ice-cream combine to make this a dish that I would not rush to order ahead of the banana soufflé, should it still be on the menu and which I see wafting past my table,  causing sadness, if only for a brief moment.

The Verdict: La Trompette is an accomplished sophisticated restaurant, serving interesting and fairly adventurous food which is not quite as cheap as you might think at first glance. It has an excellent wine list and a Michelin star. If you fancy a car ride through Shepherd’s Bush, it will be worth your while. I think we even got a smile out of C on the way home, but don’t tell anyone.

Scores on the doors:

Seaweed cracker. Can you feel the breeze from the window? 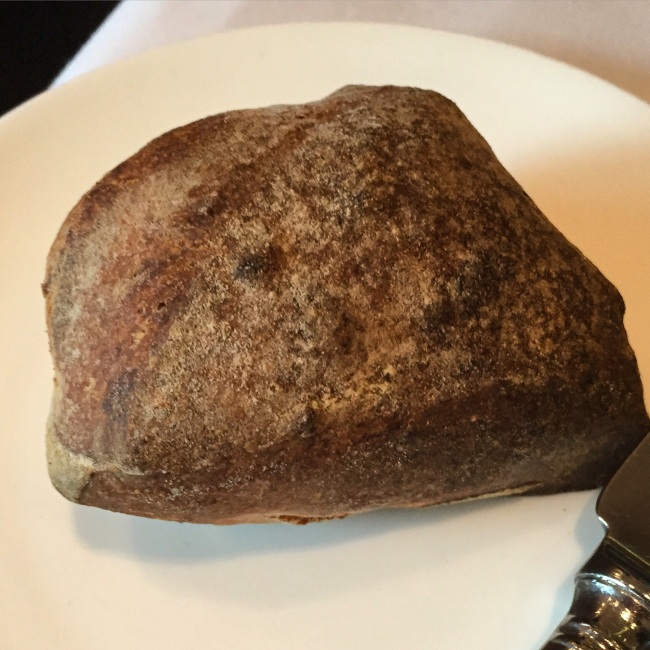 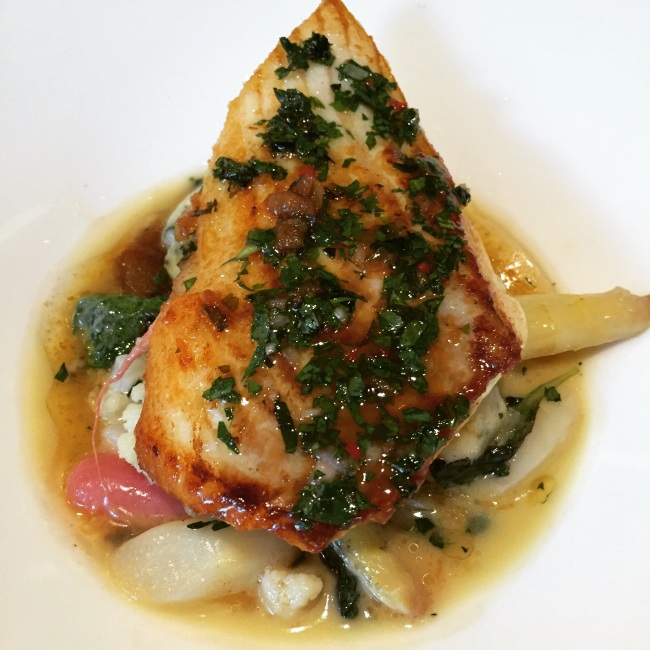 Fishy to a point

Teetering on the brink

← The Wild Rabbit. Not wild and no rabbit. Ham Yard, Soho. →