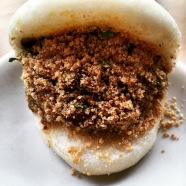 It is a Monday lunchtime and a tedious morning has my brain looking for a food-based displacement activity. There is nothing calling to me within a mile of my office and I am not in the mood for polite conversation.

I remember that I have not yet been to Bao and I am almost too ashamed to admit this, even to myself. In the world of people who go out to eat a lot, it’s like saying you have never watched Star Wars. Which I confess I haven’t. And whilst we are in confessional mode, I found out there was a game called Connect Four when I was in my forties and I’ve never watched Mary Poppins.

It is early and I remember that there is a no reservations policy.  I arrive at 12.05 and it is already packed. By 12:15 there is a queue. I also note, with deep joy, that I am the oldest person in the village, by a country mile. I am, by now,  inured to the bemused looks that I get when I go to restaurants designated for younger folk.The “young” thing is not a surprise, though, as Bao is the brainchild of three people all of whom are under 30.

Given the barrage of Bao-love on all forms of social media, I feel like I have already been here;  there have been so many pictures of the food that I know exactly what to expect. Or so I think. Pictures speak a thousand words, but not here. In a reversal of life as we know it, the food is much better than it looks on an Instagram feed.

The menu is short and sweet and my tip is not to go on a solitary excursion like my own sad sojourn,  but to take a significant other, so you can order the whole menu between you, eat some of their food and thus experience the meaning of true joy in bun form. I order you to order everything.

Bao serves mostly Taiwanese food and in particular Taiwanese bao buns, filled with all manner of goodness. The menu is split into the eponymous Bao and  Xiao Chi, which are a sort of Taiwanese street food of little dishes,  which you could eat like tapas if you were so inclined.

Bao started as a street food operation and the restaurant version is backed by the Trishna/Gymkhana folk, adding some serious restaurant nous to the operation. For all its minimalist vibe and no frills feel,  Bao is, in its own way,  slick and polished and on my visit they don’t put a foot wrong. The white lab coats worn by the staff only add to the air of clinical efficiency.

Order about three things says the waitress. I have already decided on four and there is no going back. I have just the one xiou chi starter dish,   aubergine  with wonton crisps. It’s a bowl of smoky, rich aubergine goodness, like baba ganoush via China, perfectly balanced, densely flavoured, utterly delicious. The wontons don’t stand up to the aubergine and simply act as a conveyance, enabling the aubergine to travel into my face. I am momentarily tempted to take the dish tally up to six and order beef soup with the braised daikon, not to mention the scallop with the yellow bean sauce, but I might ruin my big Bao moment.

I obviously order The Classic,  a soft flattish pillowy-white bun, filled with braised pork, peanut powder, fermented greens and coriander. I have seen it on so many times on social media I feel like I have already eaten it.  I have no idea what is about to hit my tastebuds. I am bowled over by the simple brilliance. The pork is tender and the juice from the fermented greens flows in rivulets down my wrists. I don’t care, because, unusually, my brain is fully engaged with what is going on in my mouth. The fluffy bun for The Classic is made from a bleached Chinese flour and the buns are steamed. They practically melt on impact.

Hot on the heels of the pork is the bun filled with Soy Milk Marinated Chicken, Sichuan Mayo, Golden Kimchi and Sesame BBQ. I have put this in capitals because it is a capital moment. I am not ashamed to admit that in my book, fried chicken is food of the gods and this iteration, nestled between a crisp fried Bao, is utterly wonderful. I never want it to end. It is crunchy, chewy, crisp and juicy. Sweet, salty, sharp and rich. The Sichuan mayo needs to be recreated at home.

I demolish the pickles,  which I have ordered as an afterthought, discs of daikon and deeply sweet cherry tomatoes, a good foil to the fried items. I wash them down with tea from a teapot which has lost its way en route to a doll’s house. I am ordered to put the tea in the thimble cup first, to smell the aroma. I am clearly not sufficiently sophisticated to appreciate the subtlety of this and it is a peculiar piece of faffery after the robust bunfest.

Because obviously I really need a dessert,  I order the Fried Horlicks Ice-cream Bao. It is Horlicks-infused vanilla ice cream, sandwiched inside a warm deep-fried bun, which tastes of banana bread. It’s not easy to eat and I squash it together and try to shove it into my face at warp speed,  so that it does not drip all over my lap. It is good, but I will bring my own spoon next time and eat it like a grown-up.

Judgement: In case you couldn’t tell, I loved Bao and its buns and my only regret is that I went on my own, although given my Monday mood,  that was a public service. Small and perfectly formed, Bao is a little gem in the heart of Soho, street food made good and worth a detour. Don’t expect to get in at peak times though, the early bird catches the bun. 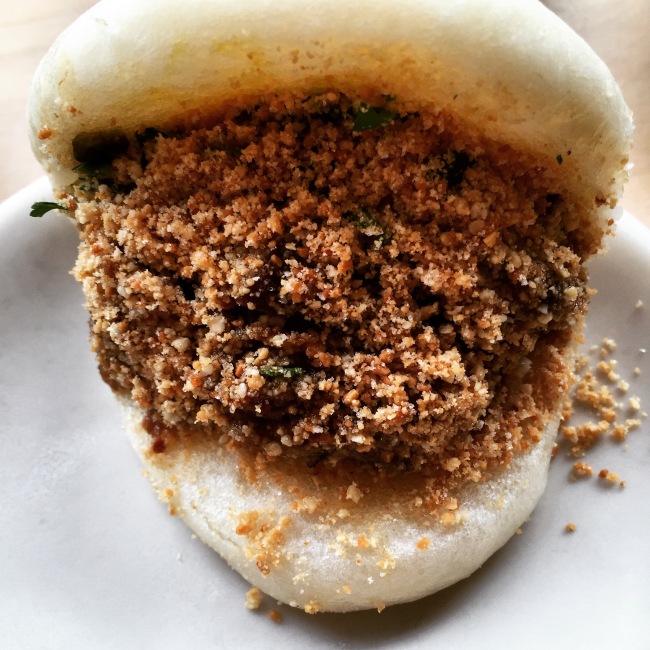 A gaping yaw of goodness 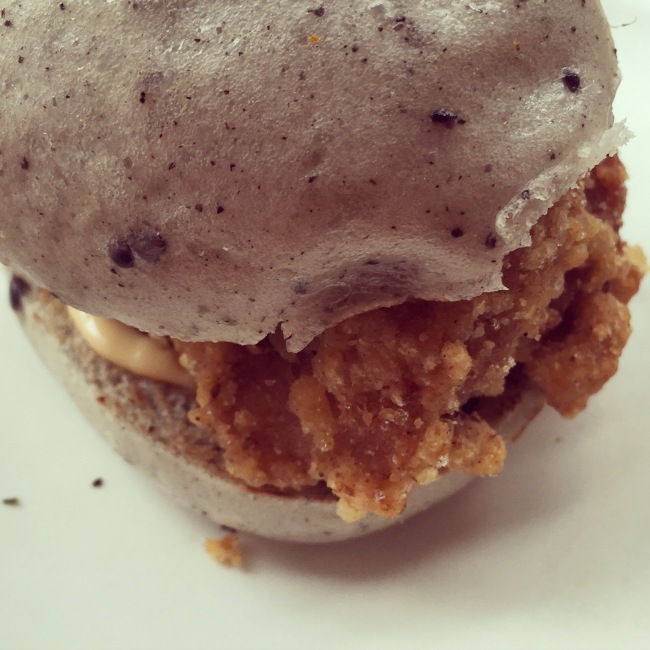 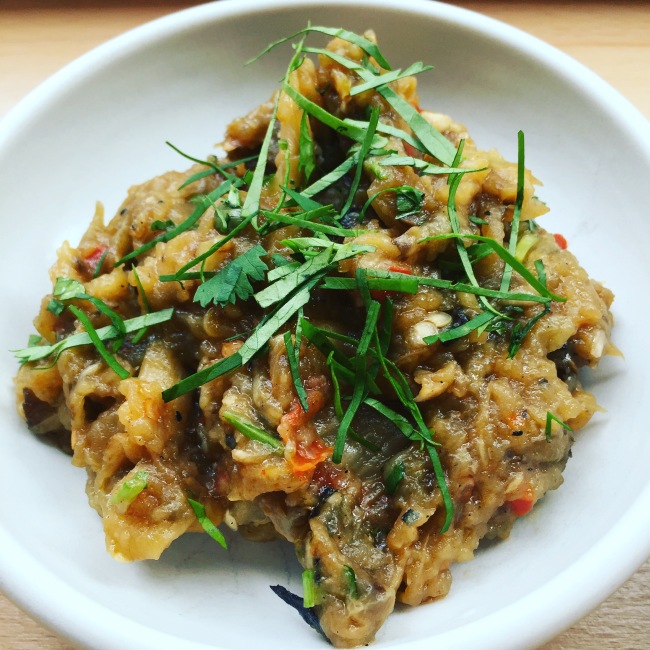 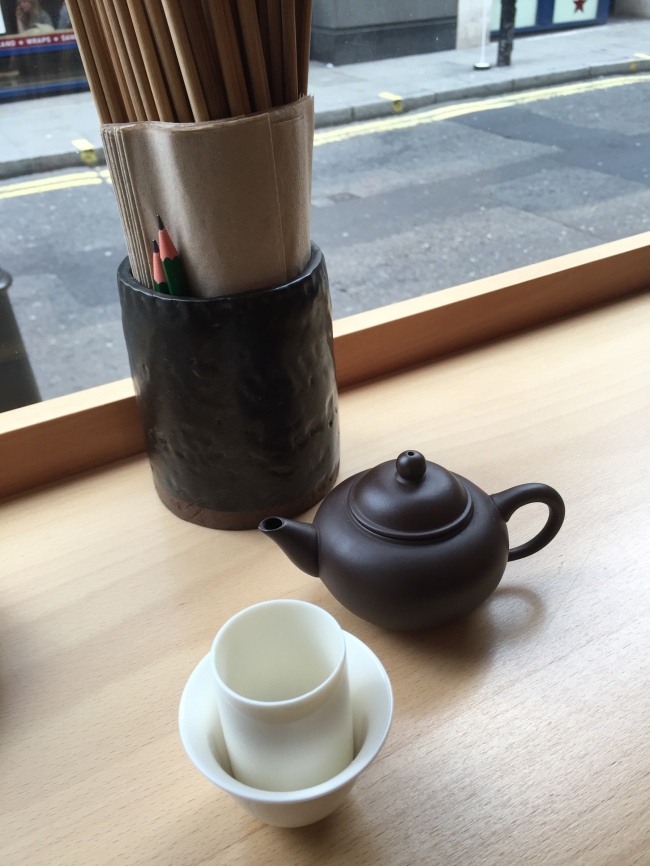 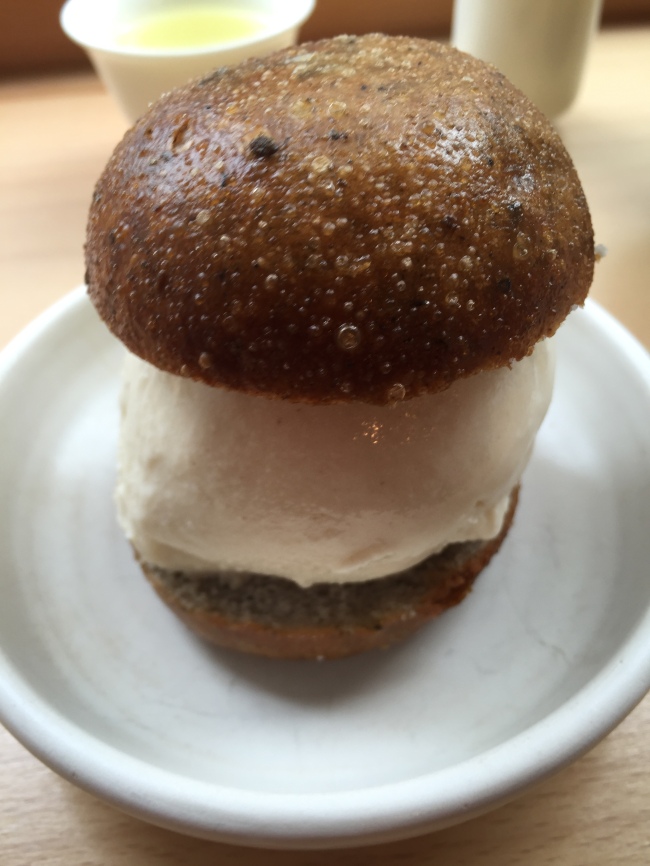 ← The Clove Club. Who said romance was dead? Shaun Dickens at the Boathouse. Not floating my boat. →