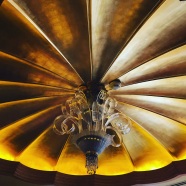 The Ritz. If you’re blue.

It’s not for me, I think, all that gilt, all those mirrors and middle-aged women, listening to the plinkety-plink of the piano,  whilst stuffing their faces with champagne, tea, sandwiches and cake.  I’m far too cool for this, I tell myself.

I entirely ignore the fact that I am a middle-aged woman with a fondness for champagne, sandwiches, tea and cake.

You can’t visit a place like the Ritz without history hitting you in the face. Built in 1906, the brainchild of hotelier extraordinaire César Ritz,  it was designed in the grand chateau style and had all the mod cons of its era, bathrooms en-suite, an early form of aircon, heated towel rails and never-before-seen fitted wardrobes.

The decorative style used in The Ritz is that known as Louis XVI, all gilt and carved friezes, wreaths and pastel colours, latticework and cherubs. There is a word for it and that word isn’t restraint. Bought by the Barclay Brothers in 1995,  a small fortune has been lavished on restoring what was a tired, faded hotel to something resembling its original glitzy incarnation.

The refurbishment has, it is said,  been faithful to the original vision of Monsieur Ritz, down to the last detail. Unfortunately, they can’t exhume the celebrities and statesmen who once graced its rooms and the days of glamour and grandeur appear to have gone for good. These days it’s with tourists and old buffers that I share my lunch and dinner, for, dear reader, I have sampled both.

We start lunch in the Rivoli Bar and I respectfully suggest that you do the same. There will be sticker shock at the prices, so factor that in and just get over it. The bar is an Art Deco jewel, adorned with Lalique wall panels and gorgeous gilded domes. Do not gorge on the nuts, the crackers and the olives. I make mistakes so that you don’t have to.

The dining room is painted friezes, chandeliers, ruched curtains and pink velvet chairs. I imagine that Barbara Cartland would have felt entirely at home.

We are seated in the sought-after window seats but there is no view to speak of and in any event I would rather look at the relics on show in the dining room.

For lunch we could have chosen the set menu at £49, an option not available in the evening, but the call of the carte was too strong. The Parmesan Royale with summer vegetables was a light delicate mousse, with a topping of pickled and cooked micro-vegetables and a crisp parmesan wafer on the side. It’s not the sort of plating I’d expect from the Ritz, but I mean that in a good way.  Light as a feather and a riot of colour on the top, this was gorgeous.

There were two lobster dishes on the menu. My companion chose the starter, which was prepared in chilled chunks and strewn with flowers. The main, my choice, was served in a bisque, atop what appeared to be a squash purée. Tender, perfectly cooked, dotted around with tiny grapes and again decorated with edible flowers, this was gorgeous. The sauce was particularly memorable, so deep you could get lost in it.

My dining companion followed with the turbot, girolles and broad beans, a whacking great tranche of tender, firm fish in a rich champagne sauce. A large platter of good British cheese finished off the main event and was followed by some decent petit fours. Lots of banter and chit-chat with the waiters took the edge off the formality and made us comfortable in what might have otherwise been a fairly frigid room.

Dinner was an altogether more formal affair,  with liveried flunkeys running around and no real interaction between us and the waiting staff, more’s the pity. It took an age to get them to take the wine order and the staff didn’t seem quite so relaxed as on the previous visit. We gorged on an endless supply of Melba toast as we waited for the wine waiter.

Had I been asked to blind taste,  I would not have known it was lobster I was eating for my starter, so little flavour did it have, as if all the lobster taste had leached out of it. No hint of sweetness, nothing at all. The texture was good but this time there were slivers of roasted garlic scattered over it,  which added only a little flavour and not an entirely complementary one, to an otherwise disappointing dish.

The turbot, with girolles, romanesco and broad beans was much better and more punchy; the fish properly seasoned but the champagne sauce a little watery for my taste.  The creamy mash was utterly delicious, rich and unctuous,  but if there was more than a tablespoon I’d be surprised. It wasn’t the biggest piece of turbot I’ve ever seen for £49 either and looked substantially smaller than the one enjoyed not a few weeks previously.

When you’re paying these prices, size matters. The venison was a success, though, served with a whacking slab of pan-seared foie gras, entirely unadvertised, so a special Brucie bonus for my companion, who happens to love it.  Served pink, on a rich gravy,with chestnut and apple, the venison was pronounced perfect.

It was with some disappointment that I noticed that the crêpes suzette had to be ordered at the outset. Perhaps they might have drawn that to our attention as we placed our order. We settled for a caramelised apple mille-feuille, which was fine, but the smell of the chocolate soufflé wafting over from the adjoining table was, I confess,  much more inviting. I ate more than my share of the petits fours to compensate myself for the chocolate error. They were superb this time, the vanilla macaron being something I need to recreate at home.

Judgement. Had I experienced the second meal first, I suspect that there would have been no second meal. Whilst I love the Ritz as a retro experience, there are only so many “Feelings” I can take from the resident pianist if the food isn’t entirely up to the mark. Dinner was a quite different experience to our quite gorgeous lunch, the staff less relaxed, the service less polished and the cooking less accomplished.  The food makes nods to the modern and when it works, it is outstanding. So I’d say go and try it, but expect a little of the unexpected. I can’t say it’s where fashion sits, but even if you only do it once, you should be putting on the Ritz.

This is what it must feel like to be the Queen. Our stately progress through the lobby was unimpeded by mere mortals.

Parmesan royale with summer vegetables. And a parmesan stick. 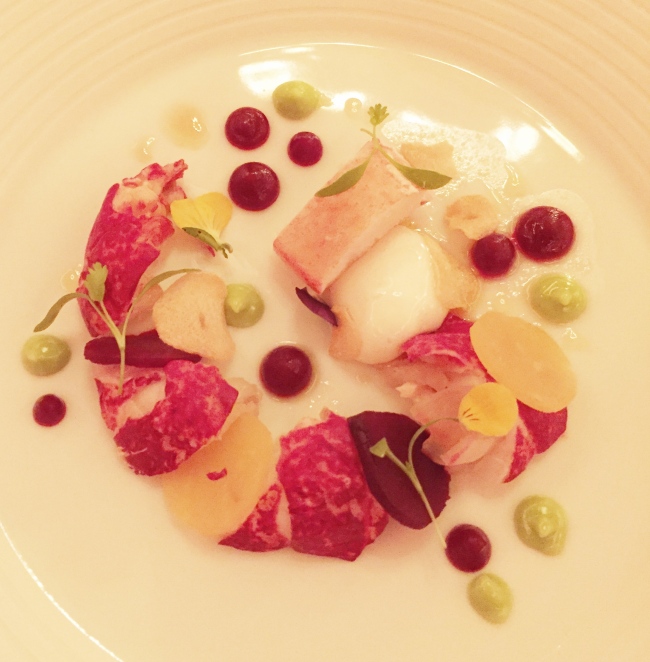 Lobster, Autumn version. Not quite so striking. 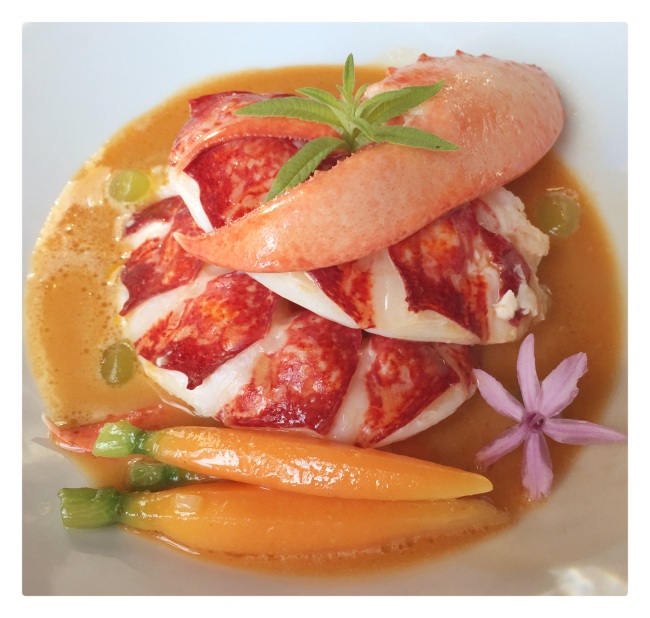 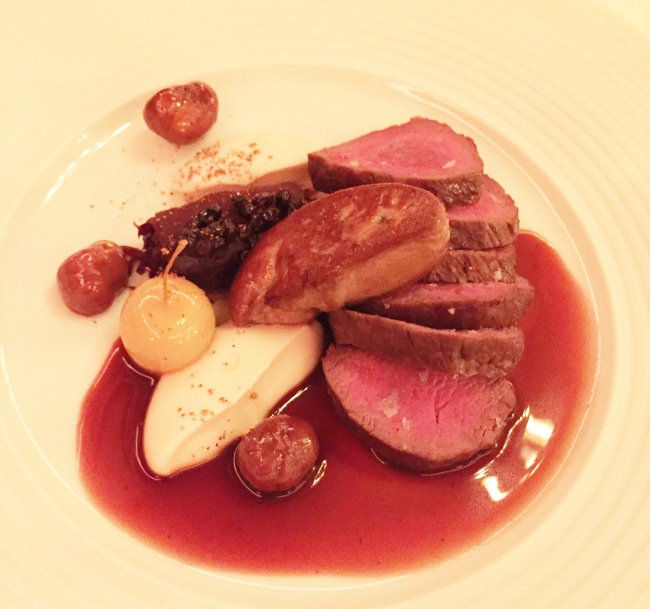 Venison and foie gras, chestnut and apple. I popped the cherry. 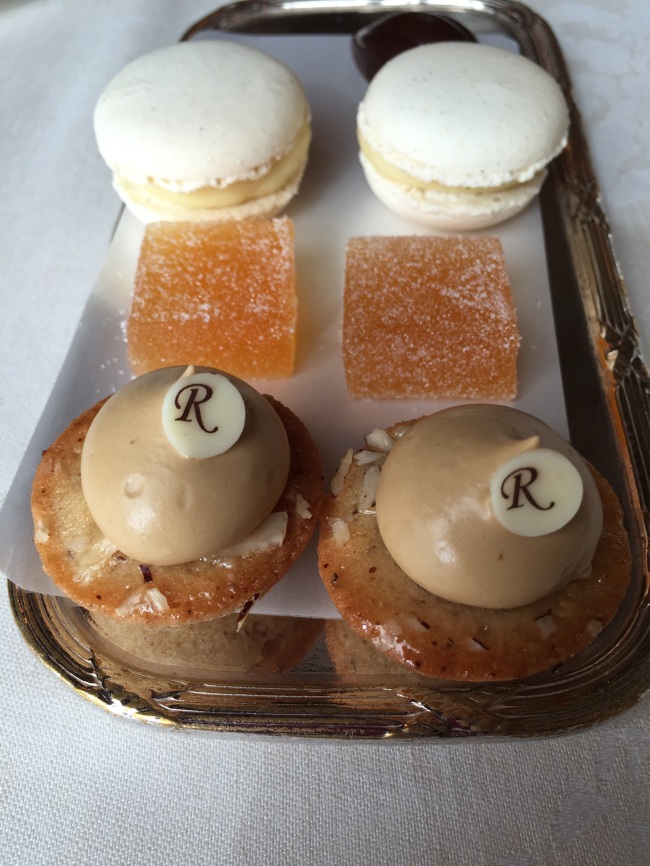 In case you’d forgotten where you were the R is there to remind you.  And because we needed more food

Cheese for one. Not even one could manage it

← Shaun Dickens at the Boathouse. Not floating my boat. The Ivy, spreading its tendrils to Marylebone. →