In the end, I had to put my splayed fingers on the glass, covering the faces of the paparazzi, their noses pressed to the window. Hoping to catch a glimpse of Rita Ora, I can’t imagine that they were particularly interested in Piers Morgan, sitting a couple of tables away.

If you’ve ever been to Las Vegas, you will have encountered a style of high-end restaurant that is uniquely of that place, until now. It’s a style that screams glitz and glamour but most of all money. Most things are fairly binary in Vegas, so when a restaurant is called Picasso, you know there are going to be Picassos on the wall Originals, naturally, and of museum quality.

Here, the artwork is mainly provided by Frank Gehry and Damian Hirst. The Gehry contribution is the dramatic lighting over the bar, in the form of a shoal of swirling fish.  There is also a massive crocodile, sprawling across the back wall, as if ready to pounce on unsuspecting diners.

The Hirst mermaid statuettes are, uncharacteristically understated by comparison, in what is said to be the most expensive collection of art ever commissioned for a London restaurant. The easily-impressed part of me surrenders to the buzz and the vibrant, warm colours. And as much as I like the décor, I really dislike the name. If it’s a joke, I don’t get it.

And it’s a restaurant where the words “the most” could be applied fairly liberally, usually next to “expensive“. I won’t go on about the tons of Iranian onyx, or the largest indoor coral reef, in the basement. I expect the ground floor couldn’t take the weight. Naturally the temperature in the aquarium is adjustable, so that you can choose your latitude and make the coral grow more quickly, should you desire.

This is a Richard Caring restaurant and it appeals to the Richard Caring crowd. The great man himself was in attendance,  all coiffure and charisma, meeting and greeting his loyal followers, like a papal train, granting benedictions and free drinks in his wake. Plebs gawked at the slebs and the beautiful rich, from the cheap seats.

I had thought we had a good table when I arrived but I soon realised that being next to the serving station and also the paparazzi-window was not desirable. There are blinds for some of the windows but apparently not our section,  meaning that the paps congregated directly outside, pressing their faces and cameras to the glass.  I’m not sure if the restaurant is complicit – nothing shouts popular more than a group of paps outside your gaff – but it’s off-putting for us muggles.

Before we start, I look at the wine list. The cheapest Burgundy is £68 so I go north-east to Alsace and a trusty Gewürztraminer. A Joseph Cattin 2013 which retails at £11.95 is priced at £53 before service.

The menu is pan-Asian, with lots of low-carb choices for the stick-thin identikit ageing Barbies in their leather leggings, many of whom are in attendance.  I wonder whether they all go to the same plastic surgeon and hairdresser, what with their tousled blonde tresses, plumped-up pillow faces and frozen foreheads.

And whilst this is somewhat Richard does Roka, it’s also a little caring for the Mayfair super-prime brigade, with its caviar selection and the Wagyu fillet steak, at £110 for a mere 150g. I don’t choose those.

Sashimi yellowtail with jalapeño and avocado is fine, thick slices but not quite enough bite in the pepper. It’s very prettily presented though, on a rustic plate, unexpected amongst all the glitz. A tartare of yellowfin tuna with soy cured egg yolk, served with lotus chips to use as crackers is creamy and delicious and there are (joy) unadvertised truffle shavings. It is excellent and we devour it. Also good are the prawn soldiers, effectively sesame prawn toast, served in squares, with a yuzu mayonnaise. I could eat a large plateful but I save myself as we also have a number of skewers, the most delicious being the maple-glazed pork belly, sweet and  crisp-fatty. The grilled chicken wings are adequate and undistinguished.

The shishito peppers on skewers are a disappointment of undercooked crunchiness and to be skipped.   Crisp duck salad is covered in a syrupy dressing which is cloyingly sweet and we leave some of it. Not pleasant.

The gochujang and miso lamb cutlets are, however,  grilled to perfection, with a crust of salty spiciness. They come with a well-executed smashed cucumber salad;  I’d happily order them again. The same cannot be said of the sea bream with sesame which, in comparison with the punchiness elsewhere lacks a distinctive personality and the pickled kohlrabi and beetroot give it a desperately-needed lift. Served without any sauce or marinade, it’s a perfect dish for a dieter.

Brussels sprout tempura sounds interesting but doesn’t quite work, with its wasabi coating under the tempura batter and a slightly undercooked interior. Of course, no-one wants sulphurous mush but neither does one seek the raw.

Desserts are a high point and both the men accompanying me go back to their childhoods with the vanilla rice pudding, topped with banana, macadamia and house cronut. It is good but not as delicious as the fluffy warm,  sugar-dusted doughnuts, served with hot chocolate sauce and a citrus curd dip.

We had a little competition to guess the bill and I won, obviously, as I’d ordered it. £255 for  three. That’s what you’re in for as a minimum and if you go for it, you’re going to be looking at least £120 per head.

Judgement: People don’t come to Sexy Fish for the food, they come to see and be seen,  in a restaurant which sets new standards in fit-out and design and which has an almost-brash glamour. It’s this year’s Chiltern Firehouse and also a restaurant for the occupants of Richistan, in a buzzy, atmospheric space. Love it or hate it, Caring knows his audience and whilst some of the clientèle is more trout pout than sexy fish, I predict that the paparazzi will be standing outside for a little while yet. 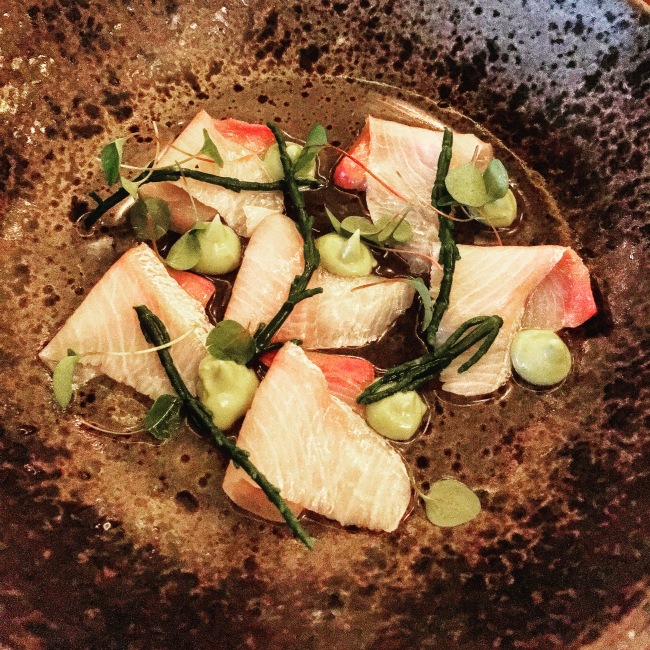 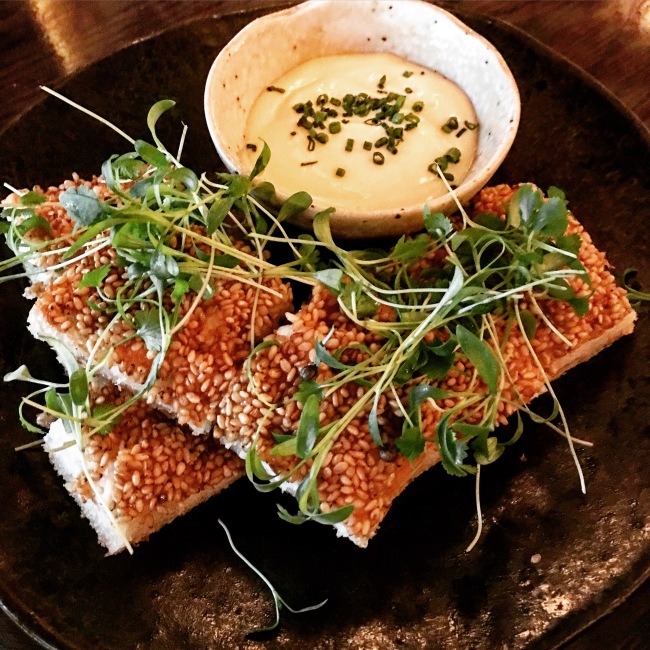 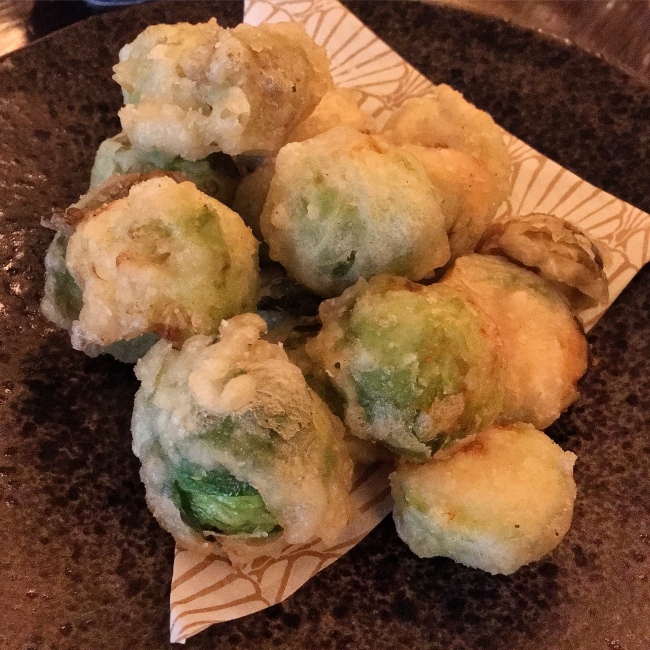 Tartare of tuna with extra truffles

Get your chops round that 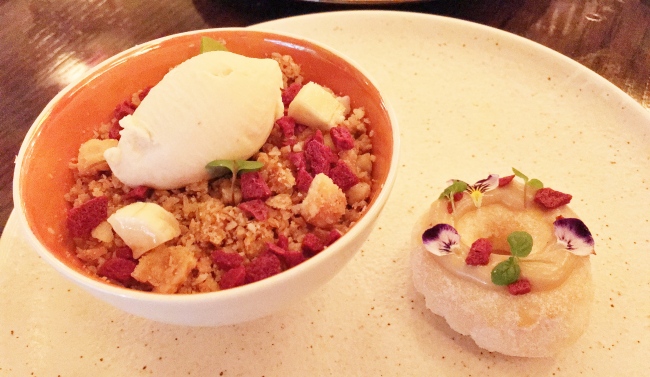 Rice pudding by way of granola 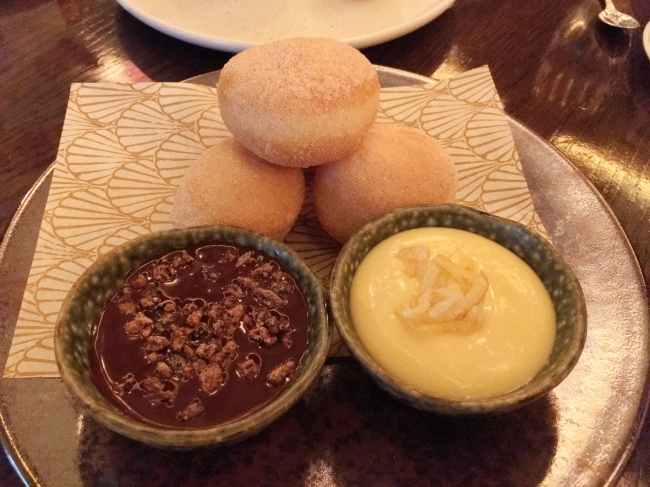 Doughnuts. Because we needed

Not wanting to ruin your appetite or anything

← The Ivy, spreading its tendrils to Marylebone. Park Chinois. Put on your dancing shoes. →