“Park Chinois occupies a niche, and offers a balance to the current club culture. It brings about a rebirth of the Dinner Dance aesthetic, a modern interpretation underpinned by old school values.” Website: Park Chinois

One of the more creative of our serial restaurateurs,  Alan Yau has for this, his latest venture, chosen to target the much-moneyed Mayfair crowd and it looks like he’s using old Shanghai as his reference point. In the dripping Golden Triangle bounded by 5 Hertford Street, The Arts Club and Novikov comes Park Chinois,  doing a me too to the itinerant rich who frequent this particular part of Mayfair.

1930s Shanghai, the “wickedest city in the world”  the Paris of the East, was a melting pot of ex-pat French, White Russians, Brits and Americans, famous for its opium dens, organised crime and cross-cultural cabaret lifestyle.

Much of Shanghai was a French Concession, governed and occupied by France until 1943. Maybe that’s why this is called Park Chinois, in a nod to history. Certainly the French influence can be seen in the décor, though I’d say it’s more bordello Rococo than Parisian elegance. There’s a lot of gilt, red and cream, crushed silk, plump cushions, soft velvets and lush colourful fabrics, gorgeously rendered. It’s a land of plenty and it’s plenty full for a middling Sunday night in December.

Liveried footmen usher you in through the heavy doors to a plush,  richly decorated hallway, where you are instantly overheated by a roaring coal fire.  Through the red doors, above which a sign announces  “on air”, you enter a lost world, a world of many white-coated waiters and heavily made-up women in glittery clothing. I fail to notice, towards the rear, a stage of sorts, with spotlights and musical instruments,  as I am whisked to the left hand side of the room where I have no choice but to sit side-by-side with C.

I am assuming that the table has been laid out thus because the space is too narrow for a waiter to get through. The tables in this section are circular and the wrong shape and size for side-to-side dining. One would, if one were not insistent upon moving,  have to spend the meal contorting one’s self towards one’s partner and sitting on one’s side bottom to reach the food whilst conducting a conversation face to face instead of cheek to cheek.

C has just had four back injections so doing the table-twist isn’t on the cards. We move to Siberia, bottom right, next to a set of drums.  I do not need to look at C’s face although I am now able to see it full-on and I am thinking that perhaps the move was a mistake. Because I don’t read reviews before I go to new restaurants, I have no idea that live performance is part of the deal.  Tip: if you are seated next to the drums understand that you will not be having any conversation during the performance. Married, fine, date, not great.

Without this being any sort of surprise we are offered, in that time-honoured way of restaurants on the hard-sell, a glass of champagne.  I bristle and go for a perfectly serviceable 125ml glass of Crozes Hermitage for £9.50 instead. They charge £5 for fizzy water.

We consider duck but see that it costs £75 and takes 45 minutes and is recommended to be eaten with caviar, ranging in price from £85 to £280 for a 50g serving.   Mayfair = caviar and I am told that it is ordered by wealthy Chinese and that duck and caviar is a thing. Not in my world. To me it’s gilding the lily; also I didn’t think to take out a bank loan before I came out to dinner.

Instead, we go for an old faithful, salt and pepper squid, served with papaya (£18).  It comes breaded, not in the traditional batter,  the papaya matchsticks too thickly cut.   All Thai’d up with lime leaf,  the seasoning and spicing is good.  Had they shredded and bashed the papaya, this would have been perfect.

Bang bang chicken, (£19)  another classic dish,  is not the usual cold shredded chicken and a dollop of sesame dressing on top, but instead is a salad of warm crisp chicken below a mixed salad and cubes of puffed rice.  A little more sesame would not have gone amiss, but this was an interesting take on a classic dish and again good, if you forget about the classic version.

Wok-fried crispy chicken is a take on Peking duck – the  skin of the whole chicken with a small layer of chicken meat beneath,  finished to a deep red glaze and laid out on the plate like a lobster, Served with two dipping accompaniments, this is gorgeous but at £35, somewhat high on the oh my God scale of charging.

Not sure whether to order the Park Carbonara with Inaniwa udon, sea urchin, 65 degree organic egg and pancetta (£32)  I’m glad we do as this turns out to be the best dish of the evening. Capturing the essence of your classic carbonara, but with a Japanese twist, the sea urchin gives it an umami hit,  the soft noodles coated in creaminess, altogether a silken, unctuous, gooey, rich plate of joy.

Whole Dover sole (£42) was deep-fried,  overpowered by the garlic and spring onion and slightly dry. Don’t.

Also a disappointment was the spaghetti squash, morels,  pumpkin and girolles, (£15) a gloopy unattractive dish, full of overcooked chunks of squash, tasting of little.  The morels were without flavour. More work needed.

The desserts were much more than an afterthought and I very much hope that someone will want to help me work through the hot chocolate menu – the Anaesthetic Sensation, with its hit of Sichuan pepper  looks particularly inviting.

The citrus and meringue concoction (£9.50) was intense to the border of too much but I liked it. The rum-soaked pineapple with liquorice ice-cream (£10:50) was so alcoholic it needed a warning. I’m not complaining, mind. Not a dessert for anyone in AA.

On our way out we asked about downstairs and the marvellous Maitre d’ gave us a sneak peek. It’s a stunning space, a proper dance hall, all glitz and glamour,  with a private room to the side all decked out in red velvet; inviting and louche.  I can’t see myself popping in there after work though.

Alan Yau says that he wants to recreate the era of dinner dancing as a “balance to current club culture” but I’m not sure what he means by that. In his ‘hood there is already The Arts Club and 5 Hertford Street, both of which (member-only) clubs have dancing and I think Mr Yau has his work cut out to fill this 15,000 sq ft space night after night.  I worry that he may have overestimated the market for dinner-dance amongst the botox brigade.

I hope he does something more casual with the Automat premises, not yet open,  so I can go and just eat the food which is mostly good and sometimes excellent. It’s a big gamble, but then, that’s true to the spirit of old Shanghai, is it not? 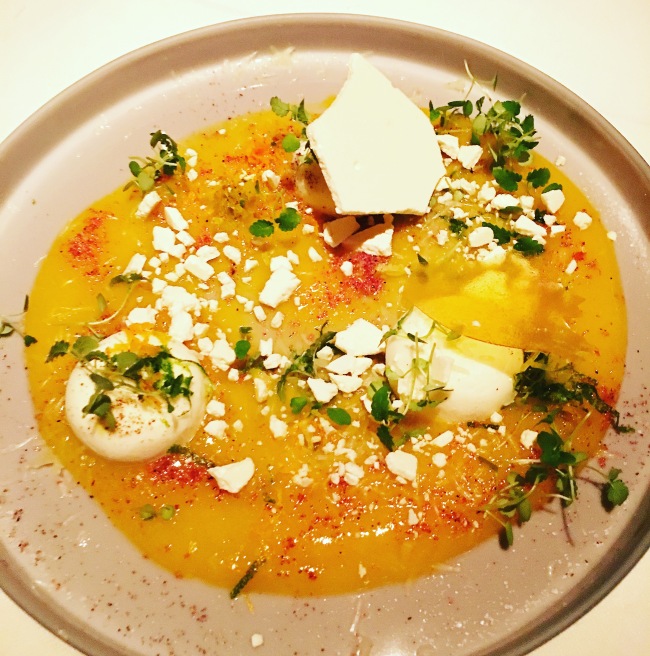 Entranced by the entrance