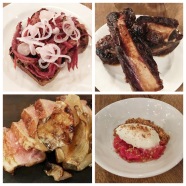 Last time I went to Pitt Cue I flounced off in a huff. Too much queueing, too little communication, too much chaos. There is only so much I’m prepared to tolerate for a plateful of pulled pork, even if it’s from a furry, fatty Mangalitza pig, their porky USP.

My queue strop happened when they had that dinky little restaurant in Soho, before they hit the big time and moved east. Devonshire Square, their new home, sounds like it should be in the West End but it’s actually in that large soulless office complex which is tucked away at the end of little road off Broadgate.

They have done their best with a space somewhat devoid of atmosphere, but it does look like every other modern restaurant des nos jours. Exposed pipework, tick. Glass bulb lighting, tick. Scrubbed pine tables, tick. It already looks like a chain.  In contrast to the previous premises, quirky and charming albeit rather cramped, this is spacious and comfortable, if a little City conventional. A new addition is their own brewery and they take the booze very seriously. As they say, they select only “underdog spirits” chosen to complement their food. They sell Clairin, an uncut, unfiltered Haitian r(h)um (sic) used in Voodoo rituals. I didn’t try it.

When booking – and can we just please savour those two words because the ability to book is one of the major advantages of this new location – my companion, shall we call him T,  was told that there was a table turn policy of an hour and a half, which is a little on the keen side even for a competitive speed-eater. When we sat down we were told it was two hours.

A waitress runs through the list of specials and as there are so many that it’s slightly awkward in that please just stop now way. As it turns out we order from the specials and we are torn as there is an aged Aylesbury duck that is getting our vote but T is feeling the collar of the brill.  There is no complementary bread but you can order bread and dripping, should you wish.

We choose caramel-glazed ribs and forego the salt beef and pickle, fearing a glut of meat. There are a couple of bar snacks and we choose some picked garden vegetables because we are only ordering one starter and of course we are worried that there MAY NOT BE ENOUGH FOOD. As the ribs are placed on the table we clock the amount of flesh and instantly decide to order the salt beef.

The meat on the ribs is chewy/crackly and on the slightly dry side of ideal, though the flavour is excellent. The salt beef is dark and stringy and comes on a piece of bread which has soaked up the juices. It is not salt beef as I know it and could benefit from a little more in the fat department. I am not sure about the bread base. The purist in me rejects it but it’s bread so obviously I manage to force it down. It was a bit salty even for salt beef.

The collar of brill is the meaty bit of the fish behind the face, that no-man’s land before you get to the main body of the fish. Obviously it has to be fairly large to be worthwhile. It’s meant to be particularly gelatinous and flavoursome and often gets used for making stock. Apparently, it is a thing, the collar, particularly in Japan, where this part of the fish is highly prized.  There isn’t much of the gelatinous happening here, but the fish is sweet and tender albeit rather unphotogenic. In this it is not assisted by being served on a hunk of wood. I thought we were over that now. I want a plate not a plank.

The main event is the Mangalitza rump, taken from the  Mangalitza pig, a Hungarian breed,  said to produce the “Kobe beef of pork” with its marbled fat and delicate texture . They’re not wrong, whoever said that. Soft, succulent slices of fatty, tasty pork with salty crackling and a side of lightly braised pickled onion, doused in a rich gravy. The onion has just the right amount of sharp and the gravy is rich. It’s lush.

Pæns of praise have been pelted at the mushroom and marrow mash, but I don’t feel the love. Lukewarm, it didn’t float my boat, even as it was clogging my arteries.

I know I am with a man after my own heart when we are asked whether we want dessert. We’ll have a look, he says, taking charge. I mumble something about being happy to share and before I know it he has ordered two desserts. There’s ice cream and rhubarb, which is a sort of deconstructed crumble,  serviceable and straightforward.  Much better is the bourbon and coke pudding, the most exciting thing about which is its name. It’s a sort of sticky toffee pudding-lite, with ice cream melting into it. It’s fine, but I can’t taste the bourbon. Or the coke. I feel that desserts are not necessarily their forté.

Judgement: Notwithstanding initial appearances to the contrary there is exciting food going on here. There are lesser known cuts of meat and unusual pieces of fish. The prices are sensible for the quality and quantity and the wine list is full of interesting things. Given its location, Pitt Cue: the City is  appealing to an entirely different demographic to its old Soho fanbase.  The menu, which is completely revamped, also reflects the fact that many of the locals will be looking for the familiar rather than the funky, but given their commitment to the quality ingredient, the unusual spirit and the brewing of the beer,  there’s still enough of the unusual to make your hardened hipster happy. In an area generally dominated by safe players, this is a welcome addition. 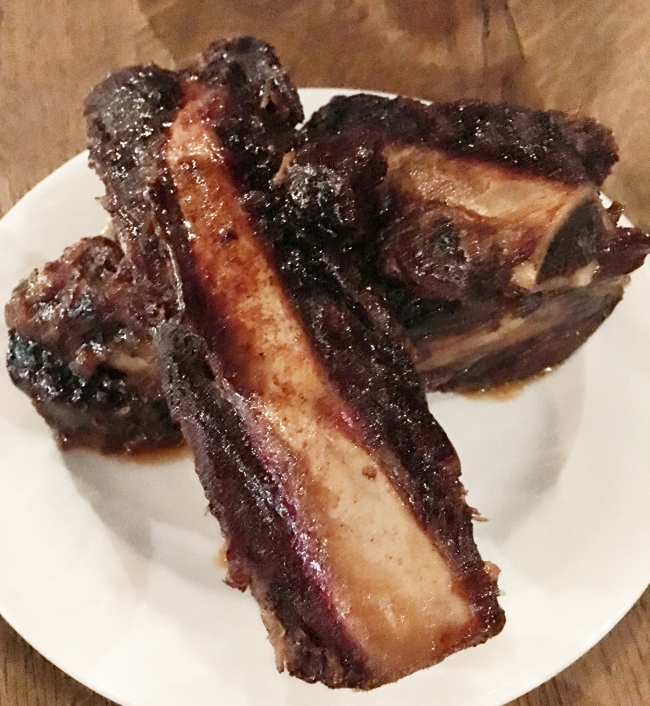 Rib-sticking sticky ribs. But not that much meat. 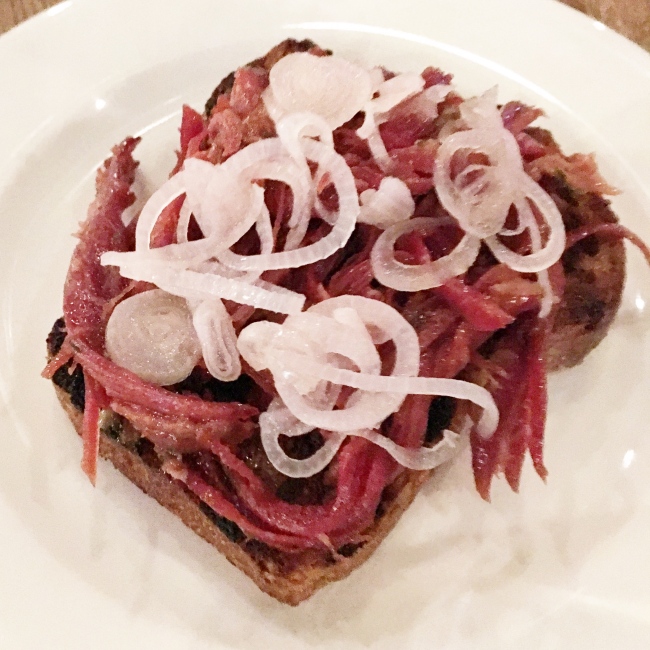 Make mine a bourbon and coke please

← 45 Jermyn Street. The Fountain Room gets a facelift. A Jewel in The Crown at Burchetts Green. →