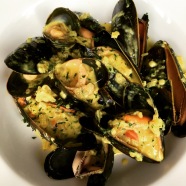 Foreword: I’ve been told by an eminent QC that I’m losing my touch and am being too nice in my reviews. “I like the ones where you hate it”, he says, “far more entertaining”. I cited in my defence a number of my less than glowing reviews but to no avail.

Whilst he was only half joking, it made me wonder whether my wish only to visit places I think I’m going to like is a sensible strategy for the blog. And it  made me be honest with myself. Why didn’t I write up what was a very disappointing meal at Murano, where a scallop ceviche with pink grapefruit, mooli and dark chocolate was quite unpleasant and the two small courses felt like a rip off for £50? Truth be told, I admire Angela Hartnett (not that I know her) and I don’t like being critical of people who I like, but it doesn’t help you if I shy away from saying it how it is, even when that’s not the done thing, certainly about some chefs-who-can-do-no-wrong. And whilst we are at it let me then tell you that last time C went into Café Murano, he asked to sit at another table in the corner. “That’s reserved for someone important” was the response.

So I asked my QC friend to suggest something interesting and a little Emperor’s New Clothes for me to review and we will see what he chooses. And if you have any suggestions, within reason, let me know. And in my final little rantette, whilst I love trying new places, I’m a little sick of the hip and happening merry-go-round and I have a day job which steals much of my time.  Also: I’m not 25.

And on which note, Jonathan, you won’t like this review, it’s far too positive.

The ‘hood in question is Notting Hill, but that bit just off Holland Park Avenue, near Lidgate’s the butcher and a little off the beaten track.  Hanging above the door  is an old shop sign for James Bricknell, confusing me momentarily. Both lawyer and historian by training I am keen to find out whether this is just some tacky cod signage of the sort that might be found in one of those fake antique barns dotted around the countryside, full of craft fair crap.

A little sleuthing and I come across an entry in The London Gazette, giving notice that the partnership of James Uncles and James Bricknell (Decorators) of 6/8 Portland Road had been dissolved and all debts due and owing to the late firm would, in future,  be paid by Mr Bricknell alone. That was his second dissolved partnership, according to the Gazette.

I’m not sure what Mr Bricknell, Decorator, would have made of 6 Portland Road the restaurant, but if he had a penchant for decent French country cooking, I expect that he’d be very happy.

A simple narrow white space, with small tables a little too close for comfort, wooden chairs and a kitchen at the back, this is classic neighbourhood bistro territory. The chap behind the venture came from the Terroirs group and the chef worked at the lovely Green Man and French Horn of blessed memory. That alone is enough to stir me into action and I go twice, in the same week.

I ask what is in the bowl. Cervelle de canut says the very French waiter. I worry about brains. I haven’t eaten them since a friend ordered them at Gymkhana, to be sprinkled over a curry, as an extra. I ate them then, not wanting to appear a food-wuss, but I’ve been quietly anxious about it ever since.  The waiter notices my face and laughs. It’s fromage frais, he says, with shallots, vinegar, chopped chives and olive oil. Silk workers’ brains, a Lyonnaise dish, the white nothingness apparently a  comment on the intelligence of said workers.

Immediately on clarification, I hoover it up on the salty toasts served alongside it. Once I have used all of them up, which is almost instantaneously, I move to the very good very crusty French baguette of which there are two servings. Obviously.

Although it may sound like it, I am not alone, but C is not as enamoured as me of the silk worker’s brains, so I have free rein.

Particularly good are the Mussels Mouclade, fat pinky-orange mussels in a curried stock. Think moules  marinière goes east. Creamy rich stock, with a taste of old-fashioned curry powder, this demanded more bread and I didn’t refuse. I can’t imagine why I haven’t had this anywhere else. And don’t think that there is anything wrong with curry powder, it is the authentic ingredient for this neglected dish and elevates it from the everyday to the status of I-must-try-that-at-home.

A dish of mackerel, chilli garlic and fennel seeds could possibly have had a little more of the advertised chili and the plate was all a little dark, what with the charred mackerel skin, the new potatoes with the skin on and the dark spinach. What it lacked in colour it had in taste; the mackerel moist and rich, the potatoes cooked to the point of almost-chewy. C’s Limousin-cross steak looked the business to me but he pronounces it average, a little too much gristle. I think it may be the large slab of  melting anchovy butter on top that puts him off his stride.

Not only that, but  he finds the menu a little limited, especially the starters and ends up with a plate of (very creditable) charcuterie, as none of the cooked dishes took his fussy fancy. I give his view as I like to be fair in all things but as in so many other areas, I disagree.

French cooking, limited choice, not middle of the road. So much to be applauded in a restaurant which has the balls to set up in the very heartland  of ageing left-of-centre upper-middle-class professionals and give them an uncompromising French regional menu, rather than the safe bistro classics they might be expecting. So what if there are a few things you don’t like, when there is so much that is good?

A second visit brings an exquisite Catalan fish stew, with aïoli on the side. More of those fat mussels and this time with some prawns, cockles  and a firm white fish which may have been halibut. Saffron, parsley, tomatoes, wine, all boiled down to a rich, deep, rust-coloured stock, salty, dense, a hint of chilli. I adored this. Meanwhile, C was eating a rather soupy Risotto Primavera which did not elicit sounds of joy. Good flavour, (I tasted) and in words I can’t believe are coming out of my mouth, a little heavy on the butter for me and, yes,  too much liquid.

A good lemon polenta cake with vanilla mascarpone gives the requisite sugar hit with a single mouthful; a granular lemon drizzle, elevated to elegance by the cream. C has decided he is not going to swoon.

Judgement: A neighbourhood restaurant for a neighbourhood which is already rather privileged, this is a restaurant which would sit very nicely in somewhere more trendy but is not out of place in considerably-richer-than-thou Notting Hill. They use pine nuts in an un-ironic way and they serve endless portions of bread. There is a great wine list, to which I did no justice at all, but that doesn’t mean to say that you won’t.

The lack of local competition  means that this is already mobbed by the grey brigade, silver surfing all over the menu and I see no reason to think that will cease any time soon. Get there and be square. 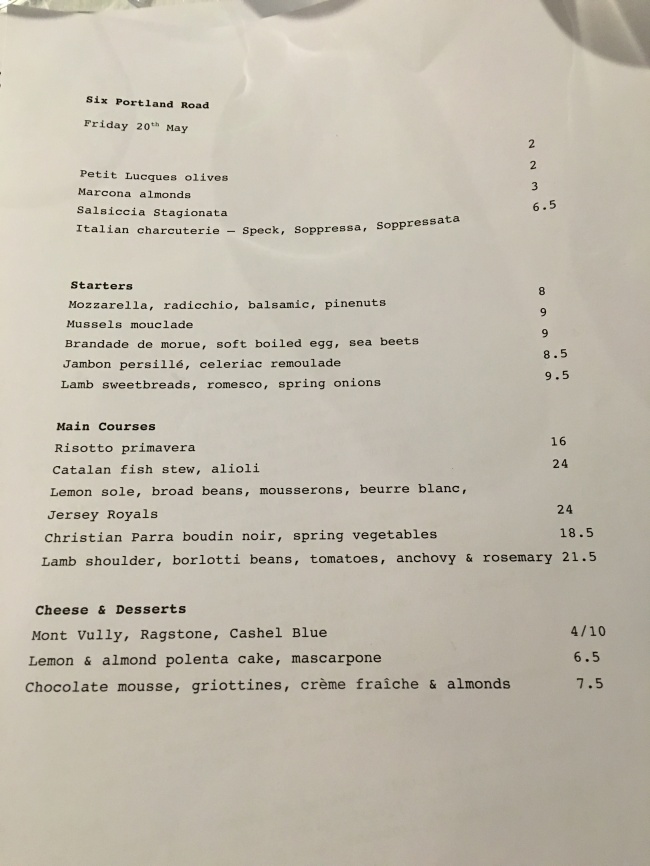 The menu it didn’t spark joy in C, but it did in me 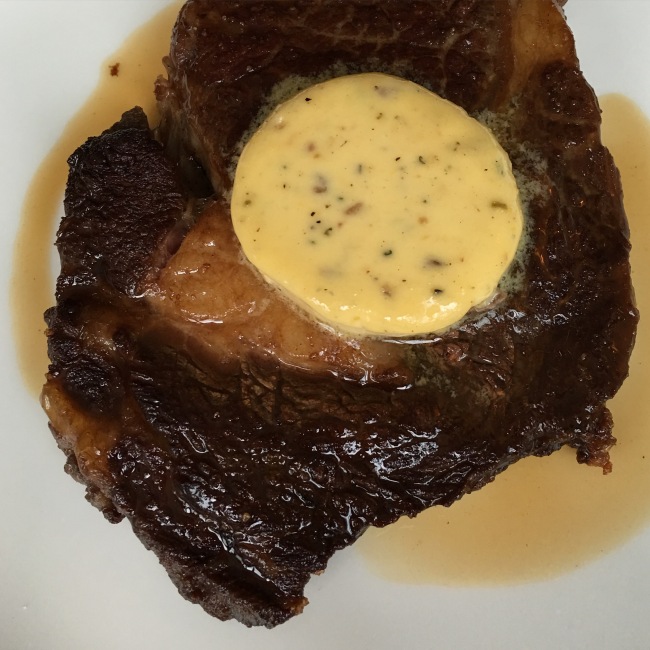 The steak. The butter. The harsh judgement.

In a stew. A really good one.

Radicchio and mozarella and pine nuts. These are a few of my favourite things

Chocolate mousse. He meh’d about that too.

A lot of brown there.

← Something for the weekend? The joy of Bristol’s bistros. Loch Bay and other stories. The Isle of Skye. →