Loch Bay and other stories. The Isle of Skye.

You may ask yourself, how did I get here? Well, quite easily really; a flight to Inverness and then a three-hour drive through some of the most magnificent scenery I have ever seen.

Like all of the proverbial best-laid, it didn’t go quite to plan. Booking The Three Chimneys on the strength of its reputation as a culinary hot-spot I tried not to be too downhearted when C pointed out that they had lost their star chef. I hadn’t realized, possibly because some Google searches still refer to it as Michelin-starred.

Michael Smith, the chef who won it for them, left to set up his own restaurant, which opened in March this year. Late to the party, as so often, my dinner-antennae had failed miserably.

And whilst the hotel, or restaurant with rooms, as they prefer to be known, is stylish and charming and the staff incredibly helpful, considerate and down to earth, it seems to me that the kitchen hasn’t quite managed to recover from the loss of Mr. Smith. The menu has ambition not quite realized in the execution. It’s that busy, cluttered style of cooking that so few do properly. I wish they would just simplify it, use the glorious local produce on offer and not try quite so hard to do the Michelin thing.

A sharp-eyed friend noticed that the former chef had decamped to Loch Bay restaurant, in the tiny village of Stein, not half an hour away from the hotel. A website not quite past the “under construction” stage and a dodgy internet signal meant that I needed to take direct action. I drive there. “Is there any way you can squeeze us in?” I say, in that slightly wheedling voice I associate with my mother. “No, we are completely full”, he says. Sensing my crushing disappointment, he looks again and as if by magic, there is a table available for that evening, at 6.15, to be vacated by 8:15.

You will all know by now that this is my ideal dining slot and short of delay disaster on the part of the kitchen, eating my meal is not going to take two hours.

Loch Bay has, at a squeeze, 18 covers, with a couple of tables outside you could have a drink at before your meal on a rare sunny day. It’s a cosy, dark, wood-panelled space, in what would formerly have been a cottage, overlooking the bay in the little village of Stein.

Because I do not know when we might be coming back and I want to get as much of this as I can, I choose the tasting menu. C is pulling a face but then, that’s not news.

Crunchy-coated salt herrings and mussels come in a small dish, to dip into homemade mayonnaise. The coating has hints of nuttiness. There is nothing not to like, unless you are C and you don’t like salt herrings. Opportunity knocks and I finish them,

We can’t wait for the soup before demolishing the homemade bread but it doesn’t matter. A soup filled with fat springy mussels, squid, garlic, haricot beans tomatoes and basil, this is like a Scottish soupe au Pistou, fresh with vibrant flavours and a clear, flavourful stock. We look at each other and nod. There is no mistaking the sure hand in the kitchen. It may not be what you think of as Michelin style (no fuss, no overcomplicating on the plate, no bits and pieces that you don’t really need) but it is Michelin quality, to the extent that means something.

A brown crab risotto with razor clam, fennel and chilli comes simply presented, the razor clam bridging the plate. I taste the risotto first and it is a perfect example of that combination of simple ingredients turning into the sublime. The crab is almost melted into the buttery squidginess of the rice, which is studded with crunchy bits of fennel. On its own, the risotto would be a great dish. I tip a little of the razor clam onto the rice. Perfectly fresh, delicate clam chunks, olive oil, chilli and fennel fronds and seeds are a perfect partner to the rich rice. It’s a combination of genius, without doubt one of the best dishes I’ve had all year.

The large bowl of bourride is such a success I have it the next day for lunch as well. The tasting menu sees it pimped-up from the standard menu version by way of added lobster and a fat cooked oyster. A local crayfish sits on a mound of paper-thin fennel slices, a fat hunk of firm white fish (no, I’m not sure), more mussels, creamy saffron-infused mashed potato and a rich tomato-based stock. It is a meal in itself, despite being only one of six courses.

Dessert brings a choice. A three-in-one of lemon syllabub, chocolate slab and an almond tart with some strawberries on the side, or Clootie dumpling, with whisky cream and custard. You know where this is going. The steamed dumpling is a sort of lighter version of Christmas pudding, wrapped in a cloth, the “clootie”. I am partial to a steamed pudding, I can’t lie.

“You’re not going to finish that are you?” Says C, as I demolish half of the dumpling. ‘No, of course not, I say” in a rare moment of seeing myself for the pig that I am. I could easily have eaten all of it and also the remainder of his dessert, left partly uneaten, because he is “full”, he tells me. Pah. He doesn’t know what full is.

I have the trio the next day and C has a massive chocolate brownie with proper chocolate sauce that I eat from the jug by pouring it directly onto my spoon. I’m not proud. Also: they brought me sea salted chips, on the house, because they saw me ask C if he wanted them with his beef and sensed my sadness when he said declined. Restaurants that read your mind, what could be better?

And because you need to know, we also had very good coffee and cake at the Red Roof Cafe, in Glendale. Their coffee comes from my favourite producer, Workshop coffee and the cakes are homemade. Some are even gluten-free but I forgive them for that.

Lobster-a plenty and oysters shucked in front of you are also to be had at The Oyster Shed, where afterwards you will need to go on the Talisker Tasting tour. A whole lobster and chips for £16.50. Worth a detour.

I expect it helped that the sun shone every day we were there and that is clearly an aberration, but Skye is the sort of place where you’ll be made very welcome in the inevitable storm and with a little hunting around there is good food to be had in some of the most unlikely locations.

Letting the days go by, in Skye, scenery to take your breath away, food to feed your soul or should that be the other way round? Both work. 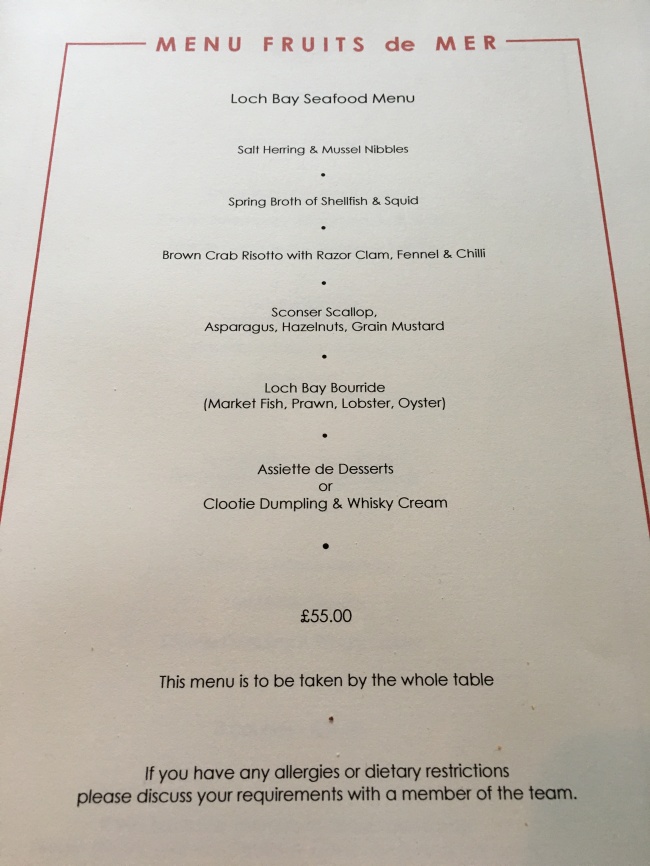 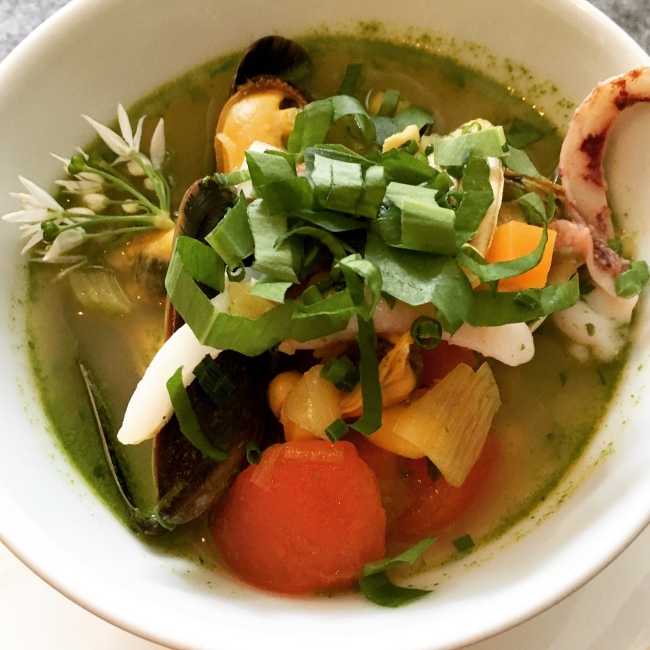 the sort of Soupe au Pistou. Check out the garlic flowers 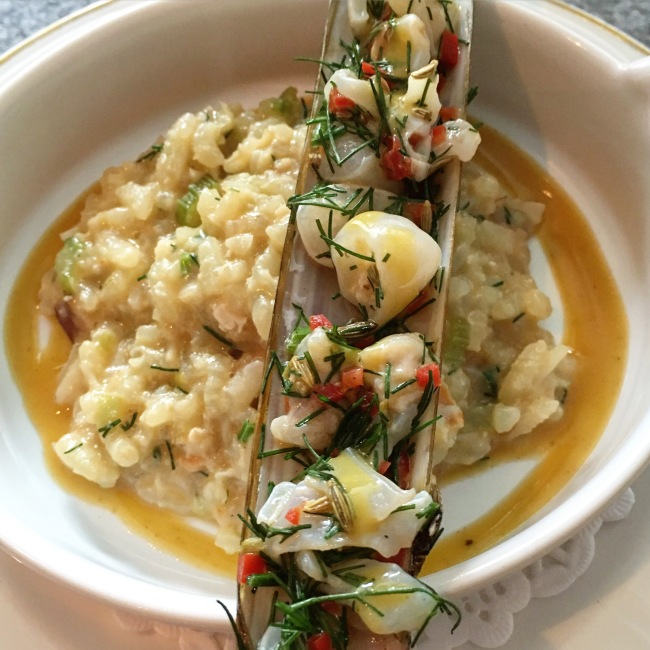 worth the nine hours door-to-door 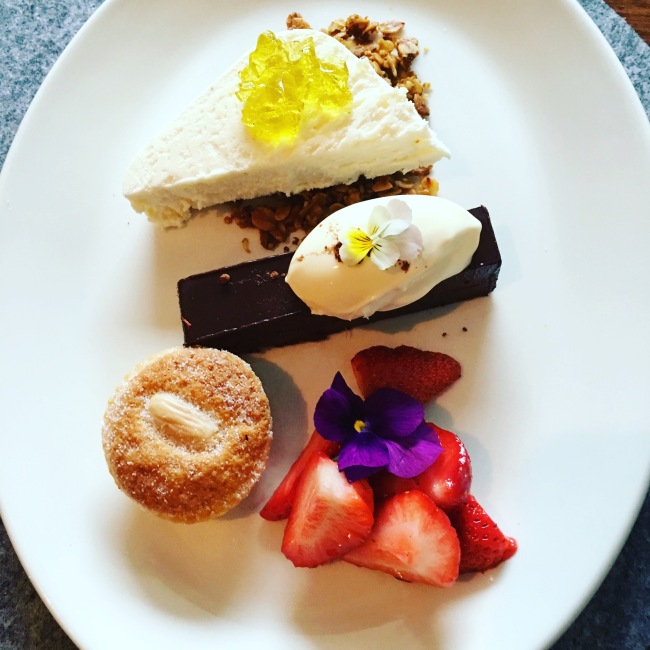 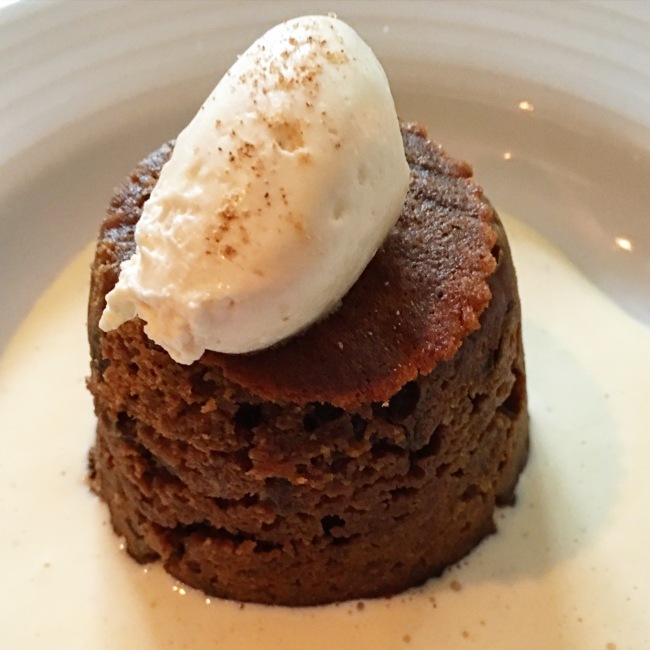 Unless they are Clootie Dumpling. I can’t believe I left some

I walked down the hill to that lighthouse. I nearly died going back up.

White chocolate and cardamom and coconut from Red Roof Café