“God, the pressure, choosing for you, you have no idea what it’s like,” says M, Head Clerk of an cracking set of barristers’ chambers we use all the time. “Honestly, I’m sure it will be absolutely fine, really”, I say, not sure about any such thing.

I have never heard of Bacco restaurant and wine bar, in that heart of lawyerland, Red Lion Street, Holborn and my foray onto the website has not made me overflow with optimism. I guess that the name is something to do with Bacchus and I am right. Bacco is described on its website as “Modern Italian Cuisine, influenced only by traditional artisan Italians methods” (sic). It is, apparently, “an original Italian restaurant certified by the Italian Company House”, whatever that means and it has been awarded “One of the best Italian restaurants in the UK by the Italian Chamber of Commerce and Industry”. It shares that award with quite a few others, some of them distinctly undistinguished.

I do not know what they mean by “an Italian ancient poem” or “imagines from an original Italian corner” on their website. I do know that their website is doing them no favours and they need to get it sorted.

The chef is stated to be Andrea Librandi, who helpfully has put his CV onto the net. As at June 2014 he was sous chef at Beach Blanket Babylon, which doesn’t make me any more optimistic, and he has been a jobbing chef, teaching and doing lots of private dinners. He still advertises as a private chef. He’s got a blog called Al Pancino (boom boom) and it shows some of his dishes and has lots of recipes on it. Unfortunately they are in Italian.

It is a sunny day and we all look longingly at the open terrace at the rear, which looks rather inviting. We are in the basement, obviously. When I say we all, there are five solicitors, four barristers and a Head Clerk. Clients would call it over-lawyering but for once it is a relief to be a guest and we can compare notes from both sides of the lawyer fence. There are three QCs, four partners and two juniors in the room. I try not to think about the collective hourly rates.

Whilst we are bitching over briefs, a bread basket arrives, and there are also some very fat olives, in brine. One of the breads is jet black. Olive. Another is chili flavoured and there is a standard Pugliese style slice. They are not the freshest I have ever tasted, though obviously I have to eat one of each, just to make sure.

There is swirly writing on yellow paper, bound in leather. I am expecting something classic and safe, commensurate with the presentation. I am wrong. There are unexpected items in the menu area.

Because I am not expecting much, I decide to go for one of their “Signature Starters,” Apulian Stracciatella cheese and cured Celana anchovies with Scapece Courgettes and Roasted Almonds. That description is not what I am expecting and the detail of the ingredients is already making me warm towards them.

The moment the plate is set in front of me I realize that my preconceptions need to be discarded. Thinly-sliced wide ribbons of courgette, marinated, topped by courgette matchsticks in a very decent pesto, a crispy courgette flower, some deep-fried courgette slices and the softest, gentlest Straciatella di Bufala make a superb combination. I ask for salt and they are worried that there is something wrong. I assure them it’s just me. If I dredge out the anchovies and mix them with each mouthful then I can possibly avoid the extra grind of sodium, but I’d rather err on the salty-safe-side. Micro herbs, tomatoes and toasted almonds help to make this a dish of delicious subtle complexity and the abundance goes some way to explaining the £12 price tag.

I have dish envy over my neighbour’s cold Rocket and Frigittelli Pepper soup which comes loaded up with fat mussels, raw Sicilian red prawns, more of that Straciatella di Bufala, toasted croutons and fresh tomatoes. I’m looking at a picture of it right now and it’s making me hungry.

Unable to decide between the Black Cod, Baked Potato and Black Olive and Pepper Caponata and the Monkfish in San Daniele ham, I do a last-minute swerve to the daily special, Trout with Yogurt, Rocket and Almonds.

Again, the plate is a riot of ingredients and a properly cooked tranche of trout sits above blobs of black, white and green. I do not know what the black blobs are, as the usual suspects (olive, squid ink) are not evident in the tasting. The green tastes like spinach and the white is the yogurt and is sweet tasting of vanilla. I have had vanilla and fish before, at The Wild Rabbit in Kingham (roasted turbot with vanilla velouté) but there it wasn’t sweet and it worked. Here it tasted like someone had accidentally reached for the wrong pot in the fridge.

Other than the yogurt weirdness, the dish was full of unexpected flavours and had a number of strange woody items in it that made it into a guessing game. Pine needles? Tick? A liquorice root? Tick. But don’t get the idea that it was tricksy. Fairly classic cookery for the most part, loaded with fresh herbs and good asparagus, lightly cooked, this was competent cooking.

I am obviously having a bit of a good time at this point as recklessly I say yes to the offer of a taste of my opposite number’s rabbit pappardelle. I never eat rabbit, it’s one of my foods-I-don’t-fancy, but I force myself. It’s good. Really good.

No-one wants dessert, but I remind them that I have a duty to my public so we order a couple of the Pannacotta with Mango and Lime for the table as well as two platters of cheese. The Pannacotta is quite firm, served in a glass and the mango and lime are fresh and zingy,  if a little overpowering.

The cheese is a decent selection, five varieties, all in perfect condition, each accompanied by either a mostarda, pickle, a compote or honey. Don’t ask me what they are but there was an aged parmesan, a blue, a smoked and a sharp goat’s cheese. Good value for £12.50 one plate is enough for three, not that I couldn’t eat it on my own. The crackers taste homemade.

The final verdict: Ignore the website and its over-complicated descriptions of the various corporate entertainment options and check out the food. Ambitious, generous and fairly sophisticated, this was an unexpected find in an area not blessed with inventive Italian restaurants. It’s not cheap (mains range from £21 to £30) though if you stick to the pasta dishes it’s a lot more reasonable. It hasn’t quite the flair and polish of Francisco Mazzei’s Sartoria and the bread could do with a rethink, (move towards the light of Locanda) but it shows touches of real talent in the kitchen, with good quality ingredients helping to differentiate it from your bog-standard overpriced central London Italian restaurant tourist trap.

Ditch the yogurt save the dish

A starter portion of melanzane parmigiana. You won’t go hungry.

Do I need to describe it? 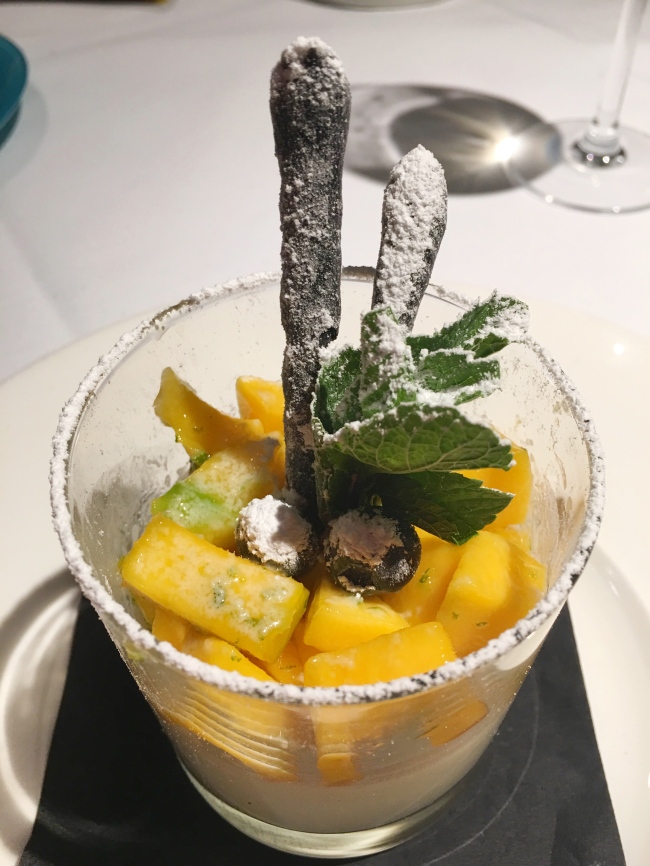 Pannacotta. They were chocolate fingers though a QC says otherwise.

← Loch Bay and other stories. The Isle of Skye. The Marksman. Right on target. →