Parsons. On the nose.

It is the new year and I am determined to find a way to eat out without it getting out of control, “it” being not only the frequency of the restaurant forays, but also the food I put into my face. I am, in this quest,  starting gently with Parsons. With its fresh simple fish offering, Parsons would appear to be a safe choice for the low-carb diner. You know how this ends.

I have seen Parsons’ plates Instagrammed to death for a few months now.  Parsons is a foodie favourite. Foodie. I hate that word, especially when it’s aimed at me. I’m still using it though, because we all know what it means, like it or not.

A new foodie-friendly opening creates a rash of identikit photos and hashtags almost breathless with hyperbole, feeding the ever-present  foodie-FOMO, an affliction I am almost ashamed to admit.

The excitement  usually relates to the draw of  a rated chef /restaurateur, or the creation of a new outpost/variation of something else quite well-known. Sometimes, it’s just damn good PR.

This is the tricky second album of The Ten Cases, a little wine bar just across the road on Endell Street. It’s been doing its thing for years now, an  achievement in itself in these times of revolving restaurants. Ten Cases is on the outer solar system of the foodie universe, though. You won’t hear a bad word about it but hardly anyone actually goes there. I’ve never been.

I am meeting my friend, F,  food and wine writer, at her suggestion. Ever present control freakery in check, I am  happy to defer to her judgment in matters of restaurant choice and particularly in relation to the wine list. She gives me a great tip, of which more later.

The menu is small and attractive. There are a number of snacks and starters as well as desserts/savouries.

The mains are drawn on the mirror towards the rear of the restaurant. It is a small mirror and it is in the corner and it has a light shining onto it. It might have been better to have used a conventional blackboard or even, heaven forbid, something printed.  On the day we visit there is  seabass, skate wing, salmon fillet, fish pie and whole plaice.

We are immediately drawn to the potted shrimp croquettes, 3 for £8. These are brought in a matter of moments, piping hot. I know that they are not low carb but notwithstanding, I still hear some words coming out of my mouth without any ability  to stop them. Can we have another portion please, I say, before finishing the first. The thought of no more is too difficult to contemplate, because these are fabulous. Creamy, fishy, gooey, with a slight chilli hit they  remind me of the little balls of loveliness at Barrafina and they are just as good.

It is impossible to go to a restaurant with a food writer and not eat carbs. It simply wouldn’t be fair in a sharing situation. Hence I find myself stuffing the decidedly high carb base of the Pissaladière into my face. A wheat/crust base, topped with  (not enough) caramelised onion and the odd addition of fleuro-tarragon blobs and crispy tarragon. Tarragon has its place in the world and its place is not here. This is our only disappointing dish. I still finish it of course. My body thinks it has died and gone to carb heaven.

The shtick here is the freshness. An open kitchen at the rear is surrounded in white tiles, on which are  painted rudimentary pictures of clams, prawns, oysters and the like. If they are available, they have a price next to them. This section appears to be starters. I choose the grilled king prawns (5 for £9.50) They are fine, slightly smoky  from the grill. could have done with a tad more dressing and salt, but fresh to the power of ten. Stand-out good was the sea trout tartare with Bloody Mary Jelly. Sharpness of the jelly contrasting yadda yadda, you know the form. It worked like a dream. Order it.

F wants the lobster mash and I say I will have a taste, but I know it will be pointless to resist. I resign myself to carbicide. But lo, they have sold out. TIP: order it early so as to save disappointment.

By way of consolation, we get our mash hit in the fish pie, for lo, I have now  accepted the reality of  potato and it is going to happen. This pie looks slightly bland and a little small, not to mention  too liquid. Had I seen it before ordering,  I may not have bothered but then I would have missed the unctuous, creamy, delicious wonder of a fish pie that was presented out us. The sloppiness of the potato enveloped  the firm chunks of fish and at the bottom was a layer of buttery spinach. Perfect. I want it again.  Have it with the broccoli and preserved lemon and pretend you are being healthy.

We don’t make a dent into the savouries. for someone who no longer has a sweet tooth, the possibility of five savoury things after my main meal is deeply attractive. Welsh rarebit will have to wait for another day however as we are full.

As anticipated, given the Ten Cases connection, there is an interesting wine selection. F goes immediately for the Xarel-lo, “Terraprima” Can Rafols del Caus, Penedes, Spain 2015. I wouldn’t, myself.

F tells me that I should always look at the some of the more obscurely-named/weird origin wines  on a list and that they will often be priced to encourage the more conservative wine drinker. This is great advice. We make the schoolgirl mistake of ordering 500ml and of course we have to have an extra glass each. It is possible that we could have been satisfied with 500ml. Actually, no. It is not possible.

A Foodie fish-bistro with fresher than fresh fish, a quirky wine list and croquettes from heaven,  I’d normally run a mile from this part of WC2 but no longer.  It is bustling and casual and friendly and I can hear myself talk. Try to grab the tall tables at the side because the tiny tables for two will restrict the piggery you will require. From low carb to go carb; but worth it. 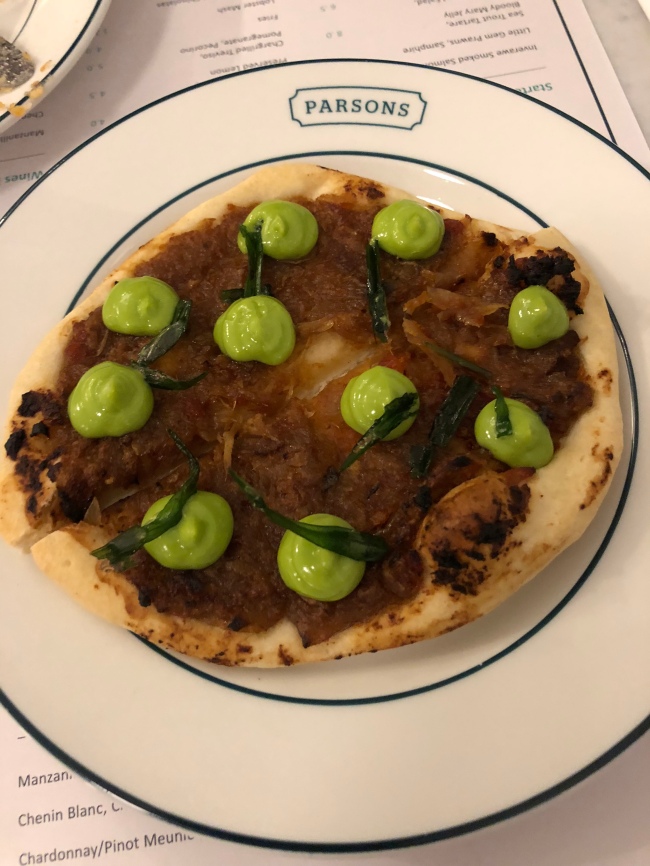 Salmon tartare  and a Bloody Mary. What could go wrong?

It’s the preserved lemon that lifts it 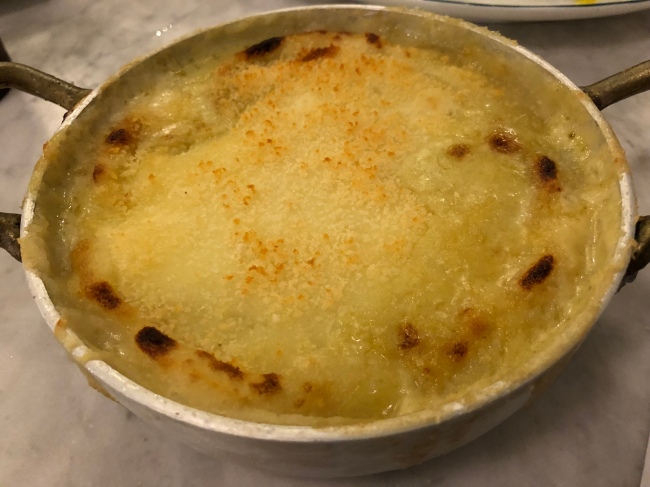 Better than it looks. Much.

Mirror mirror on the wall I can’t read you properly 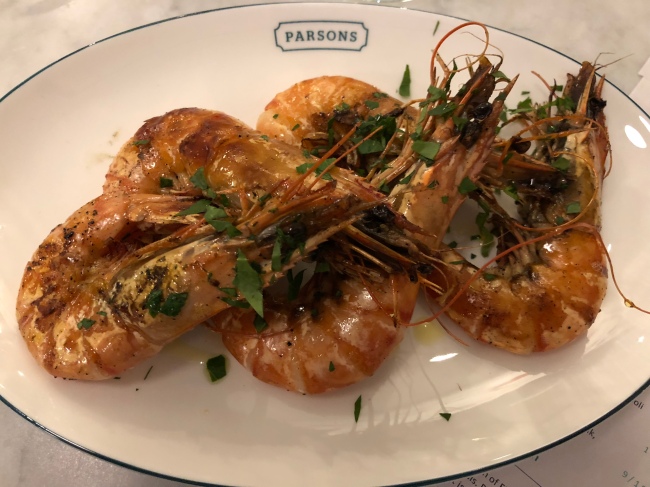