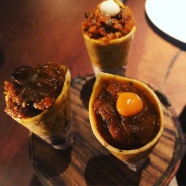 I always forget that C’s birthday coincides with Halloween, giving me two good reasons to get out of the house and away from children making demands and issuing threats. I’m sure that there are benign versions of the whole Halloween trick or treat performance but in my corner of Paddington it can get a bit too real for my liking.

Where would you like to go for your birthday, I ask, thinking that this will be one of the old faithfuls; Hakkasan, maybe, or The Ledbury and hoping for the latter.  I’d like to go to the Oxford and Cambridge, he says. My heart sinks more than a little. There are times (not too many) when the rarefied atmosphere and old-fashioned formality of the O & C are just the ticket and they have a very reasonably priced wine list to die for but really, it’s just not something I’m ever going to get excited about.

The Coffee Room is shut, he says, as I walk through the door between a number of men doing penguin impersonations. The Coffee Room is in fact a very large and very grand dining room where dinner is served and people speak in sepulchral tones until they get a little oiled. Oh dear, I say, already looking at the Opentable screen of my imagination.  There is an alternative room, but it is deadly.

I see from the real life Opentable app that there are many tables available at Indian Accent, in Albemarle Street, just eight minutes walk away. It is therefore a surprise that when we get there at 7:30 and ask if there is a table that they say no, not until 9:15. But Opentable had spaces every 15 minutes just 5 minutes ago, I say, how can that be?  There is conferring. There is a look.  I get ready to use the it’s his birthday persuasion technique, although this is obviously a double-edged sword. The maître d’ goes away for an inordinately long time and I think we have been forgotten.

There is downstairs, but you will be alone, she says, AS IF THAT IS A PROBLEM. little does she know that she is dealing with a woman whose idea of joy is an empty restaurant with no musak. I need no musical accompaniment to my eating, either at home or abroad.   It’s like a private dining room with lots of spare seats. We won’t be forgotten will we? I say, somewhat pathetically, worried I might not get served as quickly as I require. I don’t recall her exact response but there will have been an internal eye-roll.

I don’t love the name, Indian Accent. It’s a chain of sorts,  with branches in New York and New Delhi. I would quite like them to have opened a branch in New Barnet but I can understand why that may not have been attractive. It is your standard glitzy Mayfair Indian in the mould of Benares, Tamarind, Chutney Mary and the like. I don’t know what the upstairs is like because I haven’t been in it but the downstairs is elegant and tasteful in green and gold sort of way. I think it may have been noisier upstairs.

At dinner there is  the choice of the three course menu (£55) and the eight course tasting menu (£85). I did not understand the “additional courses at a la carte prices” given there was no à la carte menu and would like to understand that, in a lawyer-accuracy-needed sort of way.

Wearing my new moderate cloak, we order from the smaller menu. Before that, a little mini blue cheese naan, with some spiced pumpkin soup. The naan is perfect, buttery and crisp and I hoover it down in short order.

A chicken salad with peanuts, cucumber, tomatoes and avocado is not as exciting as it sounds, made more interesting by the addition of the word kolapuri, but it is fresh and light and beautifully presented with a sort of spicy Rice Krispie on the top. Much better is the mathri trio, which is smoked aubergine bhatra (I am not American so it is not eggplant, as per the menu), duck khurchan, and chicken khurchan. These are mini cornets of joy, filled with intensely flavoured mouthfuls, deeply umami, I would have shovelled a dozen of these straight into my face without any hesitation.

C was  even more than usually quiet at the first mouthful of the  lamb seekh kebabs and not only because his mouth was literally full. Good, he says, in his understated way. Translation:  I really like this, better than your average.

Also standout was the soy keema, a mince curry served in a clay pot. Sticking out of the top at rather a jaunty, if not suggestive angle is a stick with three mini breads, which need to be rather larger in my view. They work as decoration, not food. But no matter. The keema is insanely rich and flavoursome. Vegetarians? This is for you.

The paper roast dosa, a pretty crispy pancake dome, under which sat a curry of mushrooms and water chestnuts was fine, but the dosa a tad  oily and the curry could have done with a little more salt. Don’t judge me, I love salt.

I would cross town again for the black dairy dal but then I’m a sucker for a good dal and the mint paratha was a match made in my own personal heaven. Millet roti was interesting. The jury is out on that.

Service was excellent, despite being in the empty basement and the food was mostly spot on and interesting. The cooking sometimes strayed, in a good way, from the resolutely Indian.  The spicing was spot on and there was much on the menu I really need to try so  I’m already planning a return visit. Maybe next time C suggests we go to the Oxford and Cambridge Club. 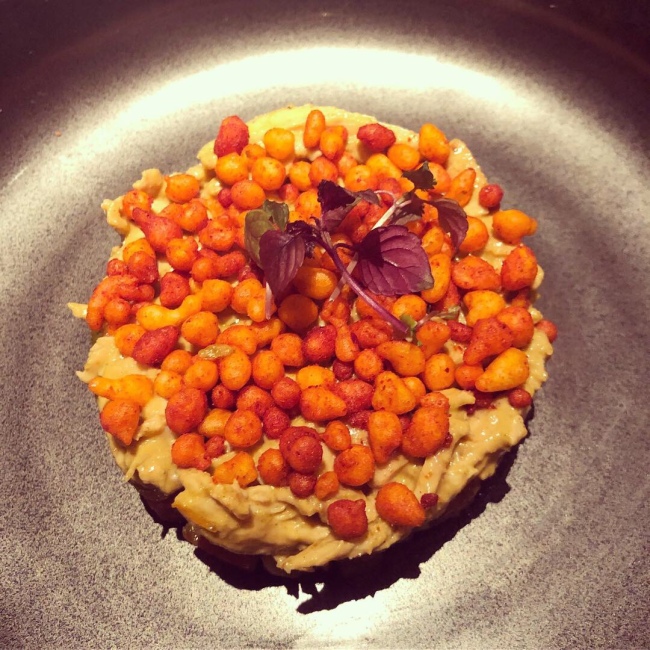 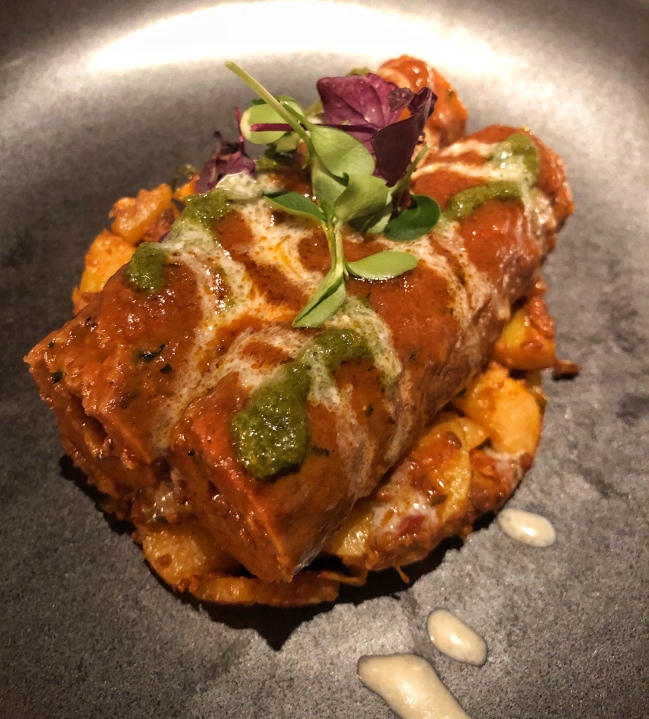 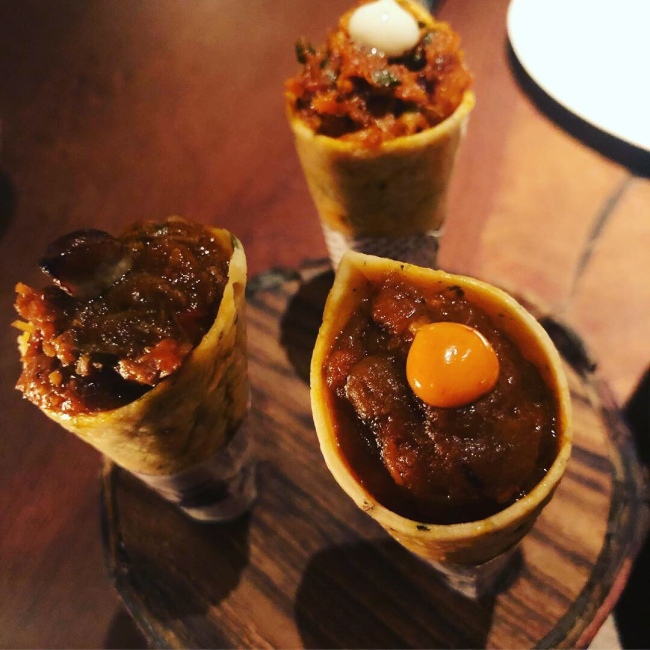 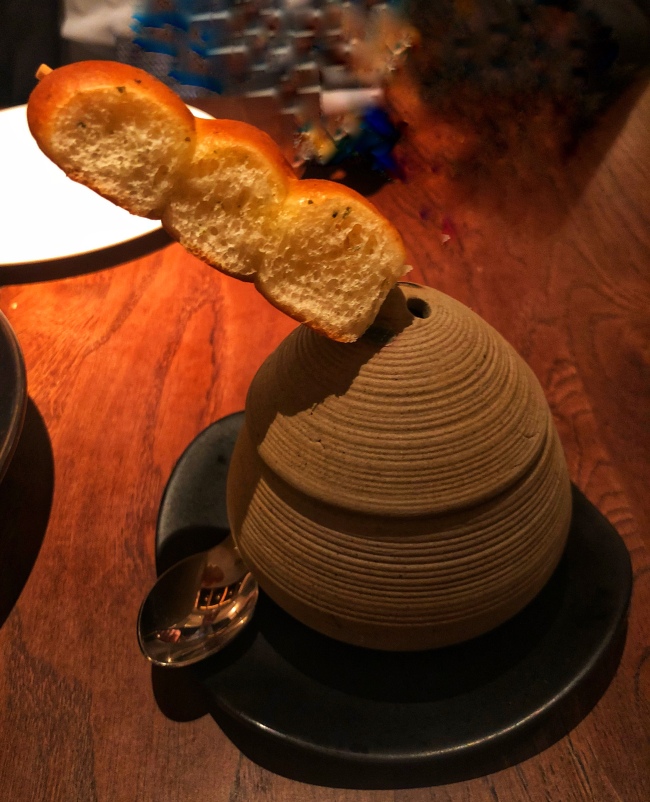 Don’t tell me it didn’t cross your mind.