Marble Arch, that bit near Primark,  is the Bermuda Triangle of restaurants. It’s great for mid-priced mediocrity and for those sad souls who buy their lunch at Boots. For careful cooking that doesn’t break the bank,  not so much.

For this constant denial, (for that is what it is) there is the reward of having dropped five clothes sizes and so whilst I am #smugface,  it comes at a cost. There is no point at which I know I have cracked it on the eating front. I am a fat person trapped inside a slim body.   I am restrained. I am controlled. I bore myself. I rarely eat what I want to eat. Except, that is,  when I am at Texture.

There is no way that I am not going to be eating the contents of the bowl of crispbreads. I am not really even listening to my lovely dining companion, Mr G, or the waitress who is trying to tell us about the yogurt dip that comes with them. I just want her to go so I can get started. I don’t actually count the number of different crispbreads because that would be wasting time.

I make a beeline for the one I like best, the one that is like pork crackling, but with a fishy taste. I realise that description isn’t selling it. Trust me though, it’s the one you want to be fighting over.  Mr G does not fight. He tells me he struggles to put weight on and I wonder if I can get through the meal and still like him at the end of it. He tells me he needs to eat 4,200 calories a day to not lose weight. He goes to the gym as well. If someone told me I had to eat 4,200 calories a day I would:

I try to pretend I’m not eating the whole bowl by having some of the very delicate, almost translucent ones. I try to eat them slowly. It is at this point that they bring the two types of crusty bread, sourdough and rye, together with the two types of olive oil and  black lava salt. What could be better? Well, maybe a half-inch of salted butter but that would be a churlish thing to wish for, when the olive oil is of this quality. Oh and there’s a little amuse bouche. And I say little,  but it was almost bigger than the starter of ceviche I had at a certain restaurant in Blandford Street earlier in the week, where I left hungry and had to go home and have two chocolate peanut butter bombs, just to feel like I could carry on with my day.

Do not give me a set menu which is cheap by virtue of the fact that you serve two pieces of fish the size of Dairlyea triangles and call that a main course. I’d given that particular restaurant a miss since they bundled me out too quickly to have a dessert, This time the service dial was set to glacial. I won’t be going back. Not when I can come here instead.

The set lunch has two choices for each course. I went for the new English baby beetroots, with roquefort, snow, walnuts and leaves. A pretty as a picture plate, in the way that you can do with beetroot these days. A far cry from the time I cried when forced to eat beetroot-dyed mashed potato in kindergarten. It took me years to work out that beetroot wasn’t a sharp vinegary horror, to be neutralised by mash, both ingredients suffering from the encounter. Worse than the sum of its parts. An abomination.

Moving swiftly on from childhood trauma to this delicacy of a dish, all colour and lightness, with a bit of snow on the side. The snow is a thing here and makes its appearance so often that it makes me think that they must have bought a very expensive machine that they have to justify by using it all the time.

Still quietly tidying the crackers into my face between courses, the Cornish Skate, sorrel, sprouting broccoli and yuzu broth is next to arrive. It’s a while since we’ve had those piled-high food-tower dishes,  but it’s making an appearance here,  like everything from the 80s. Honestly, I didn’t think we’d see shoulder pads again in my lifetime. Also, if you were there first time round, you can’t wear it when it comes back. Them’s the rules.

The fish is perfect, fresh and properly cooked. It is perched on a bed of what appears to be barley, steeped in broth, with elegant shaved fronds of pink broccoli yes, pink, scattered throughout. The yuzu in the broth gives it the necessary sharpness. There are those cute little green fingers that look like succulents. I do not know what they are and of course this pains me.

There is another inter-course of rhubarb granita, or, possibly,  snow. Delicious. In for a penny, in for another 2lbs on the scales,  I order the white chocolate, which is a pastry cigar wrapped in white chocolate, with I cucumber dill and lemon, filled with a white chocolate cream. Yes! Cucumber! And it works. Tiny squares of cucumber, mind you and some white chocolate ice cream. Do not be a snob about white chocolate. It has moved on since the Milky Bar Kid.

And because Madame might not be quite dead with her carbicide, there is a log of petits fours, with a selection of vehicles to convey sugar into my body, the warm madeleine being the standout.

The three course menu is £39:90pp with water coffee and tea. You can ditch the water and  coffee and save yourself £6 per person. Or you could have 2 courses for £29. But why would you?

It has a Michelin Star, natch and it shows. They are generous to a fault and I was pleased to see that the restaurant was almost full on a wet Thursday lunchtime in October. I still don’t like the room but I can get over myself. And if you can get over to Texture I don’t think you’ll be disappointed.

P.S. I am still talking to Mr G. I think he’s going to rule the world one day. You heard it here first.

P.P.S I think that there are ten different types of crispbread. 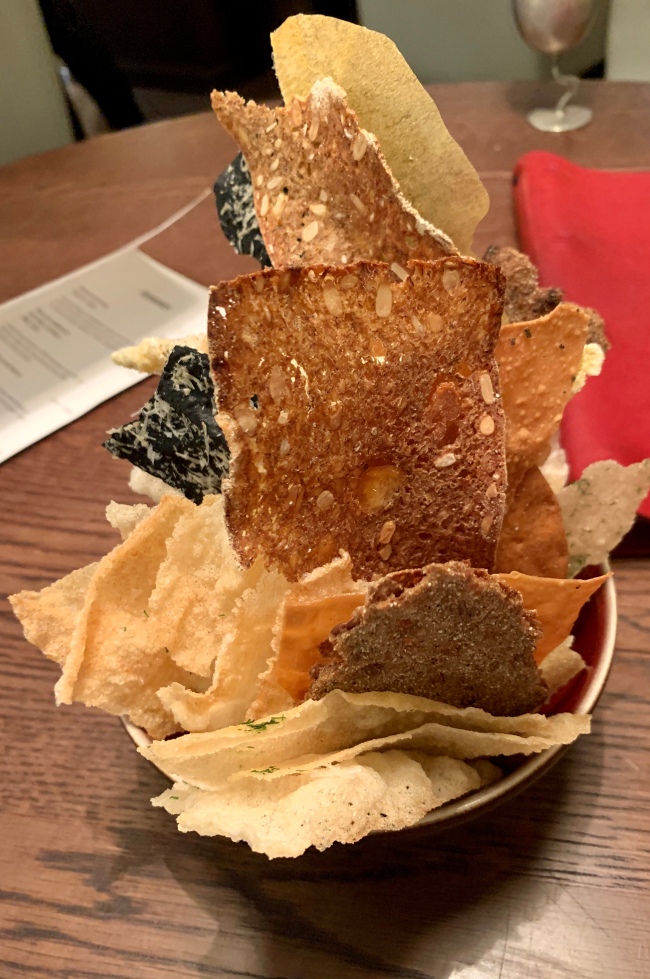 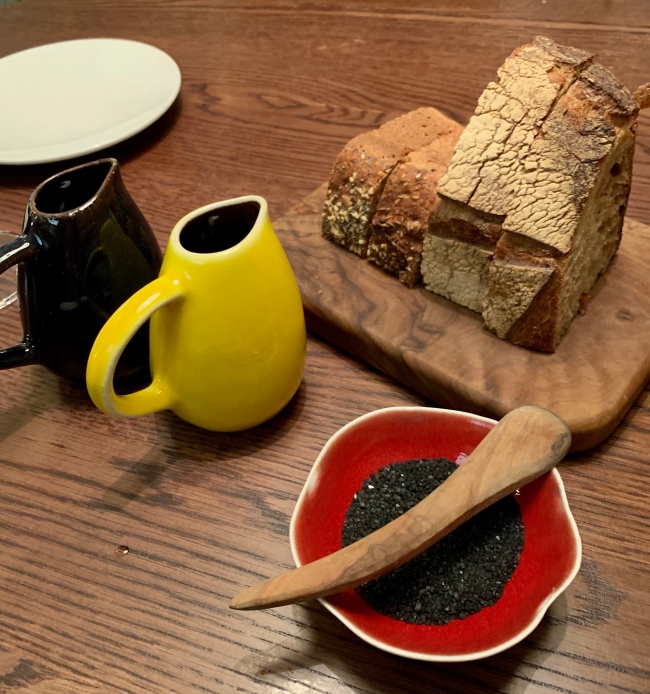 They took the bread away before I was finished. I’m still upset now.

Objects in the picture are smaller than they appear.The amuse bouche. There was celeriac.

Beetroot. Mrs Roberg would have been proud of me. Also: snow. 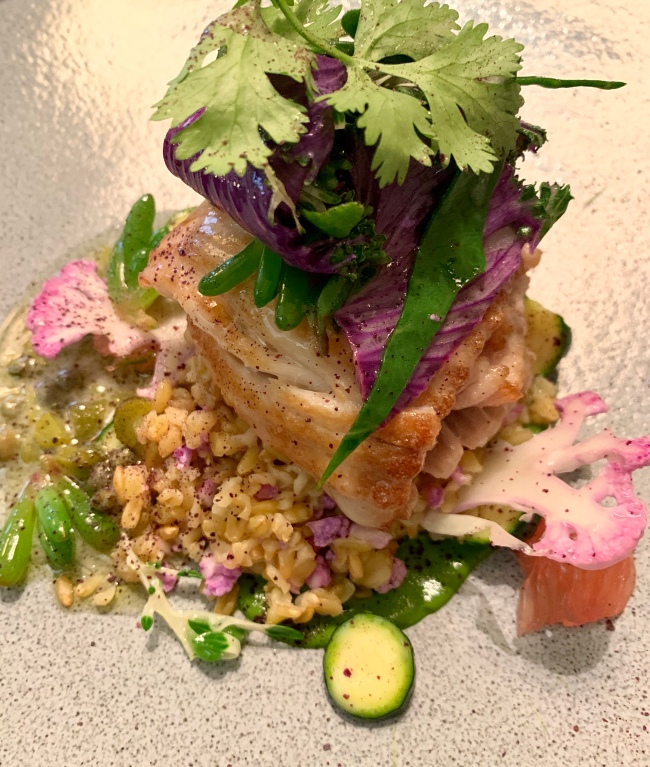 Choose your Abba soundtrack. There is a Swedish theme after all. 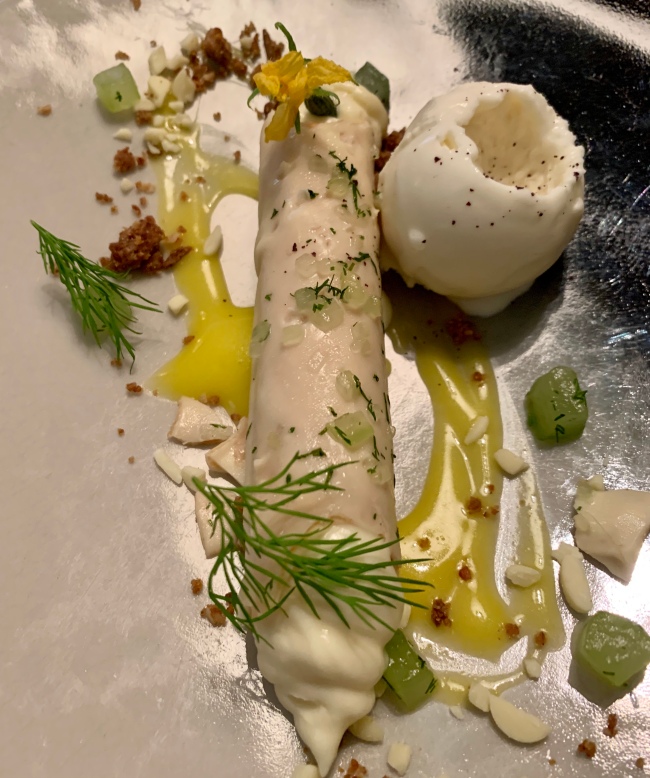 I could say nice but no cigar but I’d be lying. 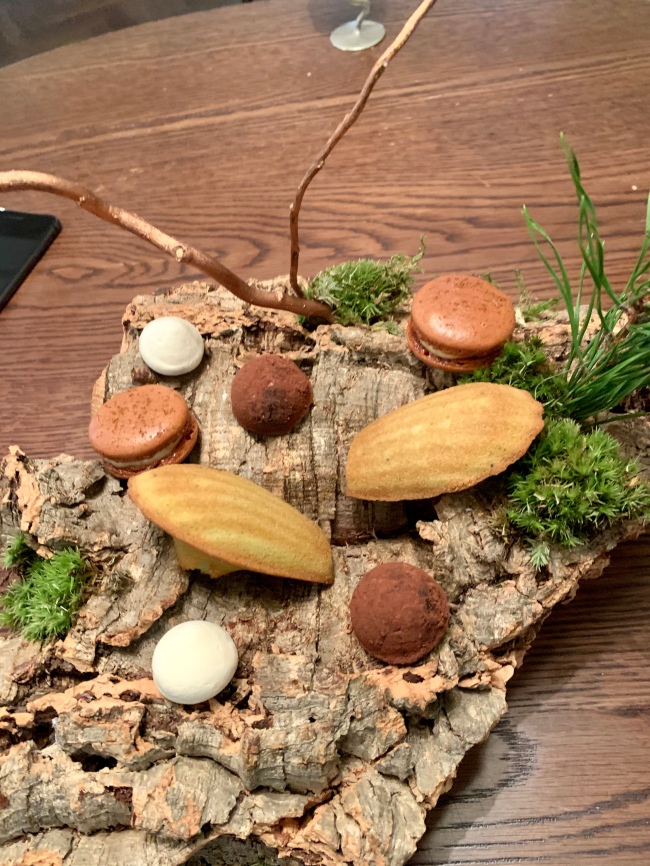