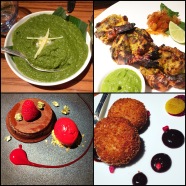 My first impression is that they have spent a small fortune on the fit-out and my second is that I want to stay in the bar.

Chutney Mary is the pimped-up reincarnation of the original restaurant of the same name which, until very recently plied its trade at the bottom end of the King’s Road. I have fond memories of Chutney Mary: the original, having visited not long after it opened in the early 1990s. I remember that it was expensive even then,  quite a stretch on my baby lawyer salary. It has certainly kept pace with inflation, and then some.

A quiet Monday and a cancellation led to a last-minute booking. I needn’t have bothered. There were four other tables occupied in the restaurant section. Either the heating wasn’t working or the aircon was set to freezing but it was so cold I had to keep my outer jacket on. I did mention, but there was no discernible difference having done so.

The restaurant is split into two sections: as you enter, a  funky/expensive bar with comfy sofas and  a bar you can sit at and a more formal restaurant at the back. The entrance is confusing and I find myself waiting for someone to welcome me at the bar. Nothing doing. I stand around for a short while until I work out that you have to walk right through the bar to the maitre d’s table. This doesn’t work.

The restaurant is all glittery glitziness and plush seating and patterned carpets, but curiously dull It’s a curious mishmash and the effect is, in the end, rather greige and lifeless, despite all the shiny mirrored mosaics. I prefer the bar, and whilst it’s not what you’d call subtle it does have a little more atmosphere, or at least as much as you can muster on a chilly March day with only two tables occupied.

I am out with C, who is all dressed up in a suit, so that he can be permitted to enter the Oxford and Cambridge Club. Beautiful though that club is, I see no reason to visit for the food and I persuade him to join me for an impromptu lunch. He doesn’t really do spur-of-the-moment as a rule but the combination of free food and a three minute walk is clearly persuasive.

Wrapping my icy fingers round a glass of Riesling, I am given free rein with the menu, though there is a suggestion that the Madagascan prawns might be worthy of consideration. But first there are two large crab cakes, on a bed of what seems to be an Indian take on tartare sauce with blobs of tamarind paste on the side. The sauces  overpower the slightly under-spiced crab. It is a little too subtle for its own good.

A crispy chicken salad is good; strips of chicken in a creamy dressing with paper-thin crisp shards of pastry and deep-fried sprouted mung beans  giving texture and crunch.  Three Madagascan prawns arrive, not an overly generous serving  for the princely sum of £28, before service, basically a tenner each. They are delicious and I make sure I savour every mouthful. Covered in a spicy paste and served with a coconut chutney and a caramelised citrus chutney, these are the best things we eat.

Lamb curry comes in a copper pot over a burner and is intensely rich and creamy. The spicing is good but I like a little more heat. The meat is slightly tough but has decent flavour. I am struck at the size of the portion, and not in an entirely positive way. A spinach side is more butter than spinach.

Now I love a good dhal, simmered for hours till it goes all buttery/creamy and I don’t really care whether it’s made with red lentils or channa dal or whatever, I just like the richness and earthy depth of the real thing. This was a pale watery imitation, lacking in flavour and without sufficient body or texture. One of the most disappointing dals I’ve had in some considerable time.

Rasmalai brûlée is a disc of a pre-prepared brûlée-esque custard, rather too set, sitting in a custard and pistachio sauce and dotted about with three balls the texture of which bring to mind wet natural sponge. I eat only the one. I think it is a pistachio ice-cream on the top and I think that only because it was green.  I am a brûlée purist only to a point, but this version is a stretch too far. C’s chocolate fondant was good, the spiced centre being its USP.

Too expensive for casual or everyday dining, this is special occasion pricing without the benefit of special occasion food. Expect to spend at least £100 a head if you have a moderate amount to drink. The fit out clearly cost a fortune and you’re paying for it. The restaurant space is uninviting and lacking in atmosphere and feels like part of an hotel. The acoustics are terrible; I could hear every word of a conversation from a table at least ten feet away.  The food was good enough but not good enough for the money. The menu isn’t as exciting as Gymkhana, just up the road and the cooking not quite as refined. This isn’t really a successor to Chutney Mary, it’s an attempt to hit the upmarket market with an Indian restaurant designed to appeal to the Maharajas of Mayfair, who presumably have no problem with the prices. In the Court of St James, cash is king.

Prawns. A tenner a pop.The chutneys were nice. 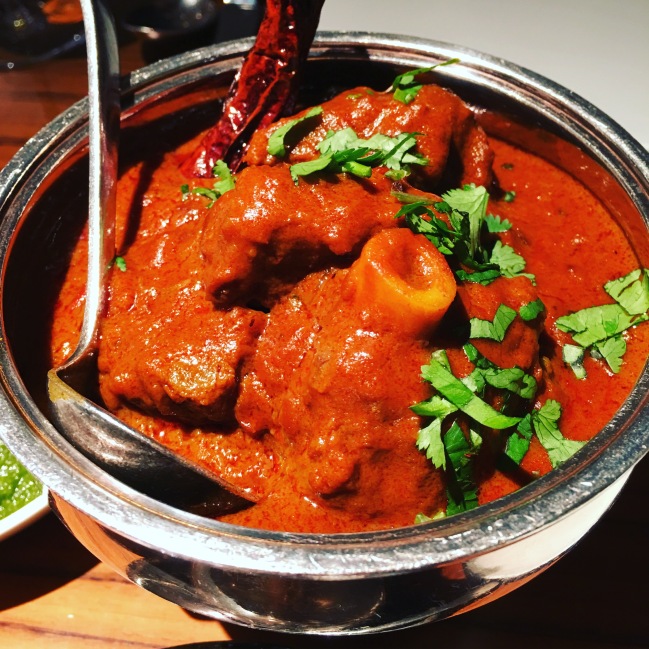 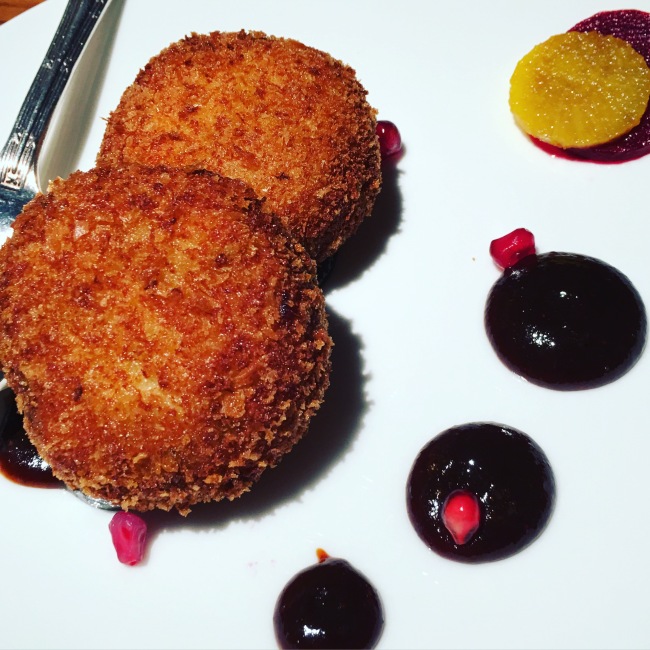 Creme brûlée, to a point. And sponges.