Hutong at the Shard. Lord, love a duck.

I’d really no business to be going to the Shard for dinner. I’d no business to be going anywhere other than one of those places where they make you fast for a week. It had been a weekend of sheer piggery in Paris, where, on the Friday night, we unexpectedly ended up at Guy Savoy. We thought we’d cancelled the reservation – they thought otherwise. So to avoid any argument and in that very British way, we forced ourselves. Hard on the heels of that, Le Cinq, again entirely uneccessary and grotesquely over the top. The sort of dining room that makes me want to misbehave, because everyone is being ever-so-polite and speaking in hushed tones. The sort of place where they give you a stool, just for your handbag.

And because it was my actual birthday on the Sunday night, an event which, obviously, I no longer regard as something to celebrate, I could justify yet another big meal. And I have wanted to try Hutong for some time. Ever since Competitive Client told me how marvellous it was, back in the summer, in that “I can’t believe you haven’t been yet” way that people do, when they find I have not actually been somewhere new, before them. And the truth is that if I ate at every brand new shiny place, my front door frame would need widening and I would need to be winched to work on a crane and people would make TV programmes about me. Britain’s fattest lawyer.

I really haven’t made my mind up about the Shard. The on-message part of me tells me to hate it for all the reasons that you already know: it doesn’t fit the area / it blocks out the sun / it’s an ugly monstrosity and a big shiny pointy finger to Borough Market and Bermondsey, its funky neighbours.

And the entrance to the 32nd floor, from the lift which stops nowhere else, is cold and a bit concrete/brutalist unwelcoming. But then you step into the restaurant and are hit with The View, and suddenly you forget that you’re not meant to like this place and you start spouting nonsense such as “London really now compares with New York doesn’t it” and “oooh, look at the trains, they look like a model train set“. We’ve all done it. And it is undeniably glamorous. I love this city and I love looking at it from very tall buildings. If you’re not impressed then I suspect you’re clinically dead.

And to get to Hutong, you have to go via Aqua Shard, which, incidentally, has the better view, given its triple height ceilings. Start with a drink there, before your meal.

I don’t think I’ve read one review which doesn’t go on about the price of the duck, so let’s get it out of the way now. £58 for a whole duck and £30 for a half. Sticker shock. But for that price, you get your own chef at the table cutting it up onto a bamboo tray for you. Not the frenzied fork-shredding so beloved of your local. A real skill. He was a little taken aback that I made him give me the leg from the half duck that we ordered. It still had some meat on that leg and I wasn’t going to waste it, not at that price.

I can honestly say that this was the best duck that I have ever had in a Chinese restaurant. As you’d imagine, I’ve had a fair few. The meat was moist and tender and the skin crispy. The pancakes were translucent. I suspect that I’ve eaten my body’s weight in duck and pancakes but I have never eaten duck like this. It’s cooked for 24 hours. They have a special duck room. I want one.

It was so good that I am already plotting my return and I am planning to order the duck, the whole duck and possibly nothing but the duck.

But we digress. Before the duck, some very delicious dim sum – standout were rose champagne shrimp dumplings (look, pink!) And the scallop and pumpkin dumplings, which were slightly unusual – but all delicious.

And then, because we suspected that the duck was going to be fairly filling, we ordered only one main course – one of their many signature dishes, Red Lantern. This came in a large, almost joke-sized bamboo basket, filled with Sichuan dried chillies. One mouthful of those and it’s all over. But buried amongst the chillies were nine or ten large deep fried soft shell crabs. Not particularly hot, despite the surrounding chillies. Crispy, moist and spectacularly tasty, I make myself not think about what I am actually eating and do that disassociation  thing, whereby I am not really eating a crab’s face, eyes and other unsavoury parts. I find that I manage to do that quite successfully.

A little side dish of dry-fried green beans with minced pork could have been unmemorable, but it was good, spicy and crunchy, the green beans being slightly blackened from the frying, with rich, meaty crumbled pork and sliced red chillies throughout. It made me want to go home and cook it myself.

Because I was feeling kindly and magnanimous, I let C order a dish – seafood fried rice with dried salted fish and ginger. It wouldn’t have been my choice, obviously – dried salted fish does not immediately endear itself to me as an ingredient – yes – I know,bacallà and all that, but do not let that put you off here, because you will be missing out on rice which is far more interesting than the usual egg fried – and for £11 it should be.

And the duck – there was a second act. They shredded the carcass and turned it into a very delicious stir-fry, with red onions and black bean sauce. That dish would have been a tenner at your local Chinese, so really the half duck is about £20 which is my way of making you feel better.

This is a sophisticated and fun “occasion” restaurant. The service was outstanding and friendly, the decor interesting and clever – old tea caddies and tea bricks lining the walls and lots of moody lighting – the food carefully prepared and well presented. Expensive yes, but hey, you’re worth it. 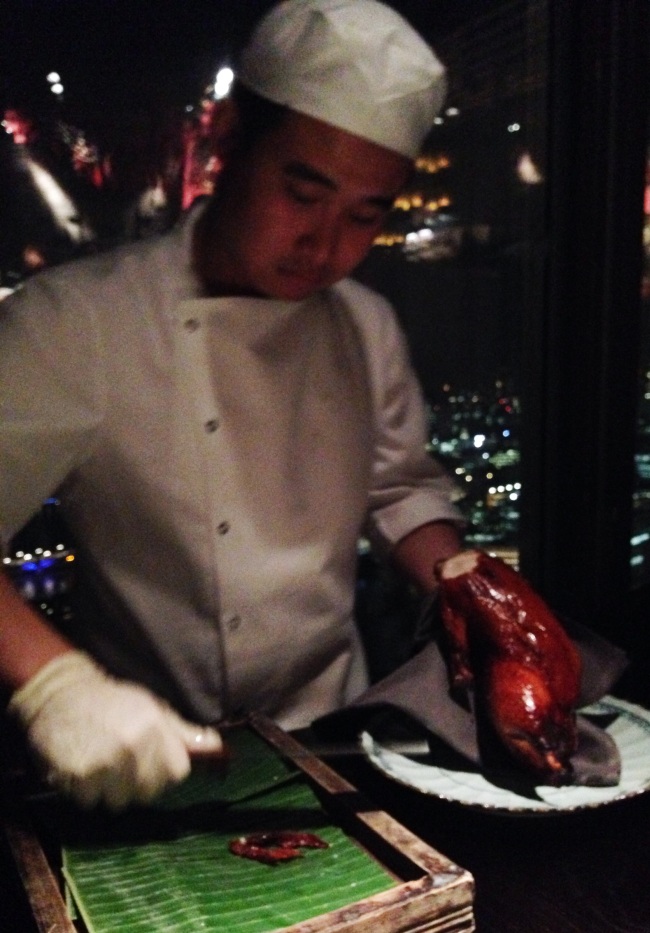 I made him give me the leg.

Duck to die for

Red Lantern. Don’t even think it.

Beans beans good for the heart. And yes.

← Not smokin’ at Smokehouse. Little Social – I can be, sometimes. →